Our Lady in White 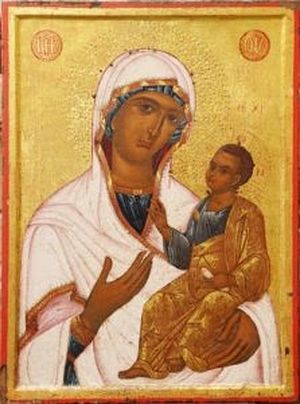 In the dependency of the Holy Monastery of Simonos Petras, in Propouli on the island of Limnos, there’s a very beautiful and rare icon of Our Lady of the Harvest (1707). It’s the patronal icon and its main feature is that the Mother of God is dressed in white, rather than the customary purple. It has also worked a number of miracles and is venerated by all the people of Limnos. On the 15th of August, there’s a festival which involves the whole of the island. One now elderly lady from Propouli, the nearest village to the dependency, relates:

‘My father was the village president. After the expropriation in 1932, the monastery sent monks by boat to collect their icons. My father wouldn’t allow it. We had no doctors, you see. We all went to the icon of the Mother of God. One morning, when I woke up, my hand was hurting and I couldn’t move it. I had to go and reap, but it was hurting so much I just couldn’t. We worked in the fields of the dependency and used to stay there overnight. I went and put my hand on the icon of Our Lady and said to her:

“My Lady, you’re our doctor. Make my hand well, because I can’t do any reaping”.

Our Lady heard me, my hand was fixed immediately and I could go and reap’.

The same lady tells of another miracle by Our Lady of the Harvest.

‘One time, my young son became seriously ill. I took him to a doctor in Limnos, the town, and he told me I should take the boy straight to Athens, which I did. That night I had to stay with a friend of mine, because I didn’t have anywhere else to go in Athens. After I’d gone to bed, Our Lady of the Harvest came to me and slapped my cheek. She spoke severely to me:

“Why are you making things so unnecessarily difficult for the boy? You should have brought him straight to me”.

The following day we went to the hospital and had tests done. The doctors who examined him said there was nothing wrong with my son and that there’d been no point in taking him to them.

I was upset, because I’d put upon friends when I should just have taken the boy to Our Lady of the Harvest and she’d have cured him’. 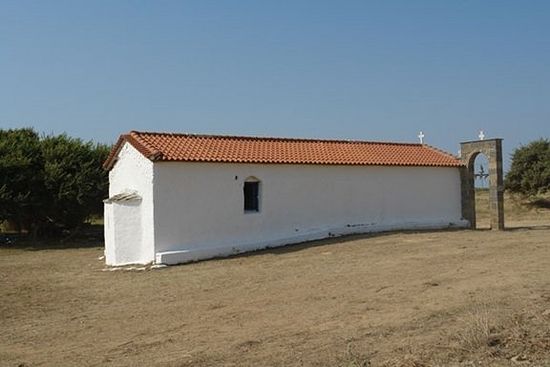 The chapel of Our Lady of the Harvest in the Dependency of the Monastery of Simonos Petras, Propouli (1706, on the site of a Byzantine chapel)

Another elderly lady from the same village relates how, if people fell ill they’d take them to the chapel of Our Lady of the Harvest, to stay in the dependency for a few days so that the priest could read prayers. Despite the fact that there were 15 to 20 families, with lots of children, living at the dependency and working on the land, nobody ever fell really ill, and this at a time when infant mortality was high. Our Lady protected them, as she did all the families.

Papa-Chrysostomos (1905-1985) who was a monk of the monastery and actually came from Propouli, used to tell the younger fathers: ‘If ever you take the icons and bring them to the monastery, leave the one of Our Lady. She performs lots of miracles and the people there will be very upset if they lose her. She’s their comfort. 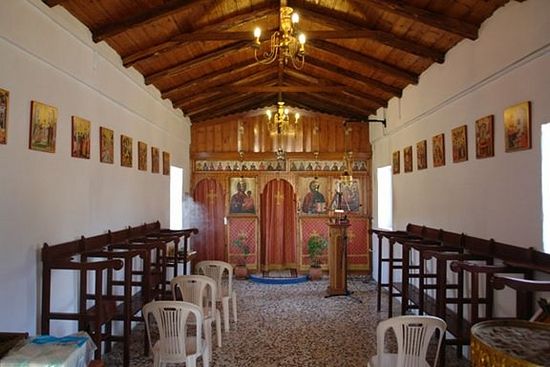 The interior of the chapel of Our Lady of the Harvest

‘One evening, three people went to steal three sheep from the monastery’s pen, where there were lots of sheep and shepherds, who also had a few sheep of their own. Because the thieves were afraid of Our Lady, they decided to steal the sheep belonging to the shepherds. One of the thieves got into the pen and they other two stayed outside to keep watch. The one inside was in no hurry to hand over the sheep, though, because he wanted to find the fattest. The others had told him to make sure he didn’t get any belonging to the dependency, to Our Lady. In the end, the thieves took three, but one of them had the dependency’s mark on it, so the other two told the first one to take it back, because they’d heard stories about these ‘oblate’ sheep and were afraid. He replied:

“If you’re afraid, take the other two and I’ll keep this one”, which is what happened.

The next day, a Sunday, they slaughtered the sheep and sold them. The thief who’d kept Our Lady’s sheep gave a piece to his wife to cook and sold the rest. When he returned home at midday, he wasn’t feeling well, so he didn’t eat but went straight to bed for a sleep.

Suddenly the door to his room opened and a woman entered dressed in white, with a scarf on her head. She had a whip in her hand. He woke up and looked at her; She looked a him grimly: “How dare you take my sheep?”, she said and started whipping him. It really hurt and he shouted out in pain. The whole neighbourhood was alarmed and came running. “I stole one of the Mother of God’s sheep and this woman came and beat me with a whip”, he shouted.

He sent his wife to the dependency to ask the fathers what they wanted in exchange for the stolen sheep. “I’ll give them my best sheep”, he said, “or whatever price they name in money”. But the monks didn’t accept his offer. That night the woman came again, gave him and good beating, he shouted out again, the whole neighbourhood came running again. And the whole island got to know about it.

They certainly weren’t going to steal again. In fact, when they were required for “corvée” labour, that is two or three days when everyone went to the dependency to plough, carry logs and do other jobs, voluntarily, when they finished in the evening, and before they went back home, they’d take their shoes off and shake them in the yard. They said: “We’re not going to take even Our Lady’s dust with us, in case we get into trouble with the Mother of God’”. 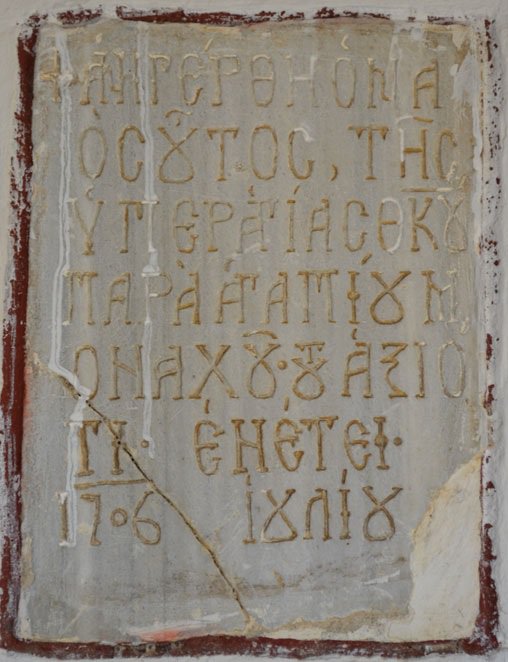 Founder’s inscription moounted on the wall at the chapel of the Simonopetrite Dependency of Our Lady of the Harvest (1706).

It’s worth noting that, both to the thief and in her other appearances, The Mother of God isn’t dressed in black or in bright garments, but wears white, so that she’ll be recognized as Our Lady of the Harvest. Ritualism or reverence
On praying and keeping holy things at home
Alexei Lysenko, Oleg Starodubtsev
In Orthodox circles, some want to venerate wonderworking icons without fail, to visit “the holiest places”, to bring earth from the grave of one or another saint, to dry up and keep prosphora given them by a priest at home and so on. Do these practices bring us closer to paganism or are they indicative of our reverence for divine things? The Icon of the Most Holy Mother of God, “The Inexhaustible Cup”
Commemorated: May 5/18
Nadezhda Dmitrieva
And let everybody see the hidden spiritual meaning in the fact that “The Inexhaustible Cup” Icon became a source of saving hopes and cures from the wicked passion of alcoholism: the Mother of God is praying for every single sinner; She, the merciful one, knows the suffering of those who give themselves over to debauchery, knows how strong is the desire of many of them to rid themselves of this brutal vice, but cannot find strength to struggle.