Manuscript of St. John Maximovitch from archives of Transcarpathian ascetic published in US 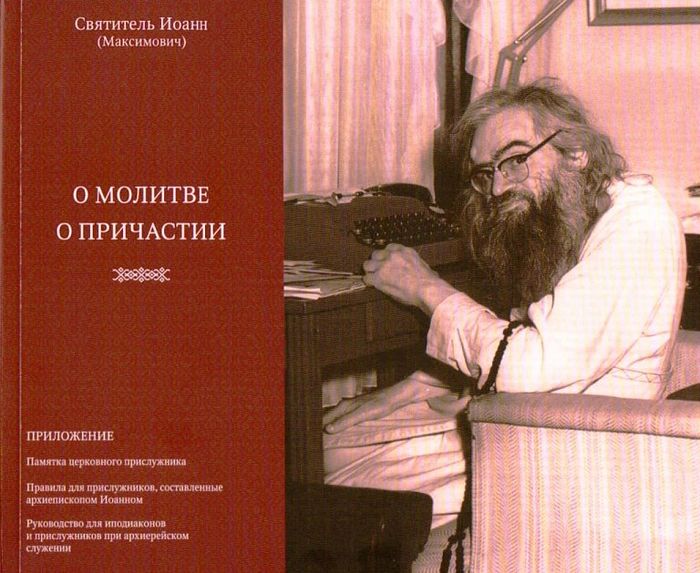 A compilation of previously unpublished essays of St. John Maximovitch, Archbishop of Shanghai and San Francisco, has been published in San Francisco. One of the texts, On Prayer, was published in the translation of a spiritual child of St. John, the ascetic of faith of the Transcarpathian region, Archimandrite Vasily (Pronin), reports Mukacheve.church.ua.

The new book was prepared for printing by Archpriest Peter Perekrestov with the blessing of Metropolitan Viktor of Kashin. The compilation includes two tractates of the saint: On Prayer and On Communion, and also the appendix Instructions for Church Servers; Rules for Acolytes, Compiled by Archbishop John; and A Guide for Subdeacons and Acolytes for Hierarchical Services. In all the book totals 73 pages.

The press service of the Mukacheve diocese has clarified that the word On Prayer was discovered in the documental archives of Archimandrite Vasily (Pronin) in 2012. Fr. Vasily’s translation of the text into Russian was carried out according to the personal request of Vladyka John, as witness letters of the hierarch, dated 1941.

A small essay on the newly-found document and the compilation was first published in “The Orthodox Interlocutor.” The text was prepared for publication by Archpriest Alexander Monich, a kandidat of theology and Academic Secretary of the Theological-Historical Research Center in the name of Archimandrite Vasily (Pronin). 50th annivesary celebrations of the repose of St John of Shanghai and San Francisco
The procession concluded with praises to St John sung before his uncorrupt relics, at the end of which Metropolitan Hilarion read the prayer to him composed by Archbishop Anthony (Medvedev), who succeeded him on the cathedra of Western America, and who initiated the uncovering of the saint’s relics, which were discovered to be uncorrupt. A Chapel in Greece Dedicated to St. John Maximovitch

A Chapel in Greece Dedicated to St. John Maximovitch
His Eminence stressed that the door-opening ceremony of each sacred temple is an opportunity to renew the soul, which is a temple of the Holy Spirit.