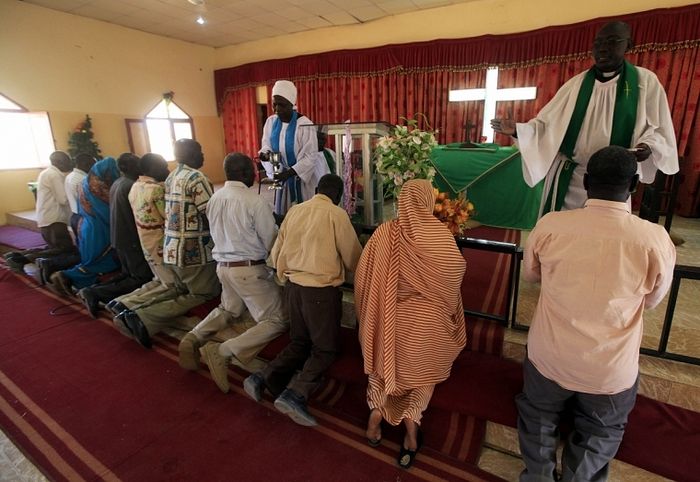 Worshippers in Baraka Parish church on the outskirts of Sudan's capital, Khartoum. Christians are being targeted in the Muslim-majority country.

The trial has begun in Sudan's capital Khartoum of four Christians including a Czech film-maker who documented incidents of persecution.

Czech national Petr Jasek was arrested in December by Sudan's National Intelligence and Security Services (NISS) a few days after entering the country. Jasek is associated with the US-based Voice of the Martyrs organisation.

According to the Sudan Tribune, Jasek and the three other defendants – all Sudanese pastors – were accused at Khartoum North Court yesterday of conducting intelligence activities and providing material support for rebels in the South Kordofan region.

The prosecutor said they had fabricated videos of incidents of claimed genocide, the killing of civilians and burning of villages as well as making false claims about the persecution of Christians in Sudan. He said they had sought to distort the image of the government by disseminating information that could be used to put international pressure on the country.

According to Czech daily Mlada fronta Dnes (MfD), on one video made by Jasek a man is seen describing how he received burn wounds; Jasek said they were inflicted when he was violently attacked by Muslims. However, the man later said his words had been misinterpreted and he had received the injuries in a car crash.

Jasek has denied the charges against him and said the translation of his statements was inadequate.

MfD said the Czech foreign ministry would not comment on the case. Czech jailed in Sudan for filming persecution of Christians

Czech jailed in Sudan for filming persecution of Christians
Jasek's trial could start in March. He may face a tough sentence in Sudan, whose legislation includes elements of Sharia, the traditional Islamic law, the paper writes. 3 Churches Destroyed in 1 Month Amid Rampant Christian Persecution in Sudan
Christians in the predominantly Muslim country of Sudan continue to suffer intense persecution, with the government engaging in a systematic destruction of churches, a conservative law group has warned. 12 Christian Girls Forced to Strip Naked During Arrest on Charges of 'Immoral Dress' After Leaving Baptist Church in Sudan
Sudanese authorities arrested 12 young Christian women in Khartoum and forced them to strip out of their clothes after they left a church service wearing what was deemed "immoral dress," a Christian persecution watchdog organization has reported.
Comments
×