Homily on the day of holy martyrs Photius and Anicetus 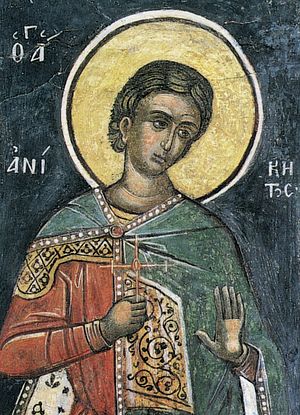 Holy Martyr Anicetas
In the name of the Father, the Son, and the Holy Spirit.

Today we celebrate the memory of holy martyrs Photius and Anicetus, who suffered for the Christian faith in 305 during the persecutions of Emperor Diocletian.

Strange as it seems, persecutions against Christians in the middle of the third century to the beginning of the fourth century had political origins. In 250, under the threat of invasion of the Roman Empire, the emperor Decius sought help from the Roman gods in the struggle against the barbarians. For this he issued an edict according to which all inhabitants of the empire, including women and children, were compelled to participate in the rituals and sacrifices to the Roman pantheon.

Usually Christians of various classes were loyal to the Roman authorities. Their support was the apostle Paul’s epistle to the Romans: Let every soul be subject unto the higher powers. For there is no power but of God: the powers that be are ordained of God (Rom. 13:1). Christians could serve in the army or occupy high positions in the senate, but they avoided participation in public sacrifices to pagan idols. Decius’s decree, in the words of holy hieromartyr Cyprian of Carthage, became “lethal” because for the first time every one was personally required to offer sacrifices. Furthermore, commissions of magistrates were formed in all the towns in order to ensure that each citizen turned up for the sacrifices. Any refusal to participate was seen as civil disobedience to the emperor.

Unlike pagans of all stripes who willingly worshipped the Roman pantheon, Christians were faced with serious dilemma: to live for the emperor or to die for Christ. Any participation in ceremonies of sacrifice to pagan gods, even purely formal, meant a denial of the main Christian idea: Only one Sacrifice opens the way to salvation—Christ’s death on the Cross. And the blood of Christ redeems people from death.

Emperor Diocletian could not but know of this, because he had Christians in his family. From the years 303-304 he issued four decrees with obviously anti-Christian intent. The supreme pontiff of Rome, wanting to strengthen his monarchical regime, declared that the divine origin of his power came from Jupiter. By this he lay claim to the role of the “god’s vicar on earth” and savior. In order to force the Christians, who comprised five to ten percent of the empire, to demonstrate their loyalty to the deity of Augustus Diocletian, like his predecessors Decius and Valerian he ordered all inhabitants of the empire to make sacrifices to the Roman gods. Furthermore, new edicts appeared by which church buildings were to be destroyed, Christian books burned, Christians fired from administrative positions, and Christian clergy arrested and forced to make pagan sacrifices.

Among the victims of this fierce persecution were the martyrs Photius and Anicetas, whose memory we celebrate today. Anicetas was a high-ranking dignitary and senator, and Photius was his nephew. They suffered in Nicomedia for refusing to offer sacrifices to the Roman gods. The information we have about their lives is from a typical protocol of the investigation into their civil culpability before the Roman authorities. Anicetus steadfastly proclaimed that only Christ is the true Lord of heaven and earth and through him is authority given to the emperors and rulers, and he publicly confessed Christ as his Savior. This position was unacceptable to the pagan emperor. Anecetas and Photius paid with their lives for this witness to Christ as their Savior. Their relics were later glorified as miracle-working, and the names of Photius and Anicetus have entered into the prayers read at the sacrament of Unction.

If for the pagans death meant the ruin of life, then for Christians a martyr’s death was gain of the Kingdom of Heaven. Belief in the Resurrection was the greatest treasure for ancient Christians. All the epistles of the Apostle Paul were permeated with ideas of Christ’s Resurrection and the resurrection of those who believe in Him: Christ was delivered for our offences, and was raised again for our justification (Rom. 4:25). But now is Christ risen from the dead, and become the firstfruits of them that slept… But every man in his own order: Christ the firstfruits; afterward they that are Christ’s at his coming (1 Cor. 15:20-23).

Faith in the resurrection formed the ancient Christians’ values system. This system is founded on the belief that the earthly values system is not relevant, that it soon passes away. The Evangelist John succinctly expressed this: Love not the world, neither the things that are in the world. If any man love the world, the love of the Father is not in him (1 Jn. 2:15). Possession of riches loses meaning before the face of time: Lay not up for yourselves treasures upon earth, where moth and rust doth corrupt, and where thieves break through and steal: But lay up for yourselves treasures in heaven, where neither moth nor rust doth corrupt, and where thieves do not break through nor steal (Matt. 6:19-20); instead of aggression, non-resistance is preached: Resist not evil: but whosoever shall smite thee on thy right cheek, turn to him the other also (Matt. 5:39); and the commandment of love is given as the highest ethical norm. Man is not responsible before people for keeping God’s commandments but before the Lord Himself. And therefore he doesn’t need to fear or be ashamed to confess his faith before the authorities. He simply needs to render unto Caesar the things that are Caesar’s, and unto God the things that are God’s (Lk. 20:25).

It is amazing that at almost every act of the martyrs’ suffering, the authorities and the martyrs are literally speaking different languages. The martyr explains the fundamentals of his faith that motivate him to refuse to offer sacrifices and thus prove his loyalty to the emperor, while one or another proconsul insists that he can believe in whatever gods he wants but he has obey the imperial edict. He doesn’t understand the Christian’s stubbornness at all. 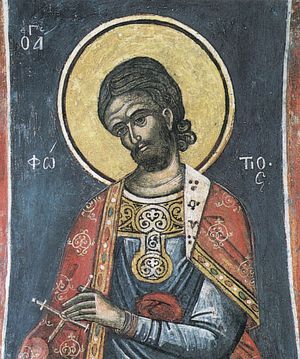 Holy Martyr Photius
In this misunderstanding can be seen a profound conflict between the pagan’s values and the Christian values. The pagan, like the Christian, also sought greater treasure, but the results of their searches are completely different. While the pagans were preaching military valor and bravery, they were, as holy hieromartyr Cyprian notes, spilling human blood over the whole world. In gladiator contest, the Romans raised murder to the level of art, and theater was turned into an immoral spectacle. A false supremacy of the law was reduced to the judge’s barter in sentences, honor was given not to valorous rulers but to the very idea of power, in public debate the winners were not wise men but shifty, rich men, who became not the possessors but the slaves of their riches. Therefore at the call of the Roman crowds for “Bread and circuses!” Christians began given opposing answers: For even when we were with you, this we commanded you, that if any would not work, neither should he eat (2 Thess. 3:10).

The Emperor Augustus, who conquered the bordering nations, justified himself by saying that by this “peace and safety” would reign all over the world. This was his political slogan. But the apostle Paul, who saw into the future, said, For when they shall say, Peace and safety; then sudden destruction cometh upon them… (1 Thess. 5:3-4).

Despite its looking for the last times, the ancient Church condemned eschatological radicalism. Willful seeking of martyrdom was forbidden, and selling everything and digging yourself into a cave was discouraged. It was forbidden to commit suicide by means of confessing the faith, and martyrdom “for the sake of earthly glory” was frowned upon. The martyr’s sacrificial death was his personal choice of the path of imitating Chrsit.

In our days, dear brothers and sisters, we also seek to follow Christ. In the Creed we declare that we believe in the resurrection of the dead and look for the life of the age to come. Nevertheless, let’s take a look at our lives: By what deeds, worldview, and values do we witness to our faith? We might even watch the same vulgar television programs and laugh at the same stupid jokes as the unbelieving. We wander aimlessly through the internet, just killing time. We are capable of deceiving, seducing, robbing, and humiliating other people. In Christian families there are almost as many divorces as in atheist ones. How do we differ from them other than by a pin on our jacket with a depiction of Christ crucified?

For the faithful of antiquity the form and content were in separable. If I started looking for the resurrection of the dead, it means that I should already, now, have the fear of God—I do not have the right to envy my neighbor or offend him. When the martyrs of old were attacked by wild animals, many pagans felt compassion for them because they knew what kind of life these pure, beautiful souls led. Who will defend us if there be persecutions in the twenty-first century? We are not friends with others, we bite at each other in the workplace, we boast of our imagined talents, are ready to kill our brother for a cent, we don’t want to give up any luxuries, and peace and grace do not always reign in our families. If that is so, it means that we are weak in faith, and the there is no great value in the Resurrection for us. We count our treasures, but we have not yet clung to the pearl of great price, whose name is Christ.

Let us look at the lives of the ancient martyrs who preached Christ through their lives. Let us listen to what the blessed Paul says to us again and again: Yea doubtless, and I count all things but loss for the excellency of the knowledge of Christ Jesus my Lord: for whom I have suffered the loss of all things, and do count them but dung, that I may win Christ… That I may know him, and the power of his resurrection, and the fellowship of his sufferings, being made conformable unto his death (Phillip. 3:8, 10).