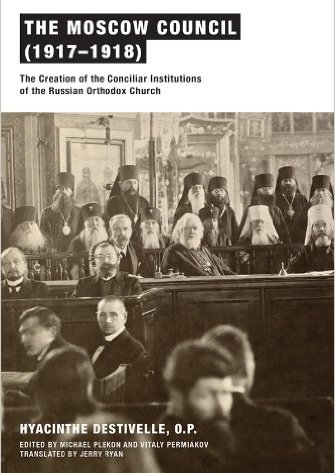 The recent Holy And Great Orthodox Council in Crete inspired me to read about another Orthodox council, The Moscow Council (1917-1918) from a book written by Hyacinthe Destivelle. This Council was held in the midst of most interesting and tumultuous times as Russia was in the spasms of itsrevolution which would overthrow the dominant social order of their empire. The Church leaders and membership at times resisted the changes, at times prompted the changes and at times was pushed and carried along by the changes.

The Council was being considered and planned for a number of years before it actually took place. The outbreak of the Russian revolution actually catalyzed the Church into action. And while the Church leaders meeting were often inspired with creative thinking and were willing and able to look at issues the Church had not given serious consideration to in the past, ultimately the Church found itself chasing the retreating waters of history and then being smashed by the incoming tsunami called Bolshevism.

The Russian Church for years had been seeking to be freed from its enmeshment with the state, but was totally ill prepared for the collapse of the Russian state and the rise of the Bolsheviks. And while the atheist Soviet state might seem to be the very government that would have also wanted a church-state separation, it instead decided that controlling the Church as the Russian state had done since the time of Peter the Great was actually to its own advantage. Rather than ignoring the Church it no longer believed in, the Soviet State attempted to dominate and then destroy the Orthodox Church. The Council members were trying to delineate (from the Church's point of view) what the role of the Orthodox Church would be in a society in which there was a separation of Church and state, but history was passing them by and they didn't realize the arising state had no interest in giving the Church freedom to realize its mission.

While these events were just beginning to unfold, we can see the ambivalence or even confusion expressed by the Council as to what the Church’s relationship to the state should be. “The Church, although it aspired to independence, did not have the intention of renouncing its privileged relation with the state or of separating itself from it” (p 183). The Council members believed the Church had a privileged position and used demographics to bolster their belief. Stating that since factually “the larger majority of the population” (138) claimed membership in the Church it therefore was entitled to an advantaged position in the land, the Council members never envisioned that the Church might lose that majority position or that for the Bolsheviks such thinking meant nothing. They seemed not to have realized how unaffiliated many (most?) of the population really was with the Church. It was a state religion, cultural religion, but didn’t have the sincere loyalty of the hearts and minds of many in the Church. The masses (what the Church believed were their faithful members) did not rise to the defense of the Church.

That the Council members continued to believe in

“The ‘juridical status of the Orthodox Church of Russia’ shows that the ideal of a ‘symphony of powers,’ formulated by Justinian I (527-65), clearly takes precedence over their separation. In the name of its historical, sociological, and perhaps theological primacy, the Russian Orthodox Church claims a status that would unequivocally assure a privileged place—not only with respect to other confessions but as regards all other Russian institutions. By claiming this preeminence, the council sometimes seems to resist the idea of separation from the state—especially in its insistence that the principal political leaders profess the Orthodox faith” (pp 140-141).

So, on the one hand, the Council believed that in order for the Church to fulfill its true mission, there must be the separation of Church and state. They knew the disadvantages of being not only wedded to the state but controlled by the state. They wanted the Church to be released from the stranglehold of the Petrine Russian State, what they didn't realize is what government was coming in Russia intended to fully strangle the Church.

On the other hand, they still wanted to draw upon entitlement from the state. They expected the newly emerging Russia would give the Church independence while at the same time using all of its civil powers to keep the Church in a entitled position. It wasn’t to be, for what emerged in Russia was a state freed from the powers of the Church but totally willing to dominate and abuse the Church hoping to eradicate it altogether.

As events in the emerging Soviet society were moving rapidly toward an anti-Church position, the Council frequently ended up responding to the ever changing events rather than leading the Church to help shaped the nation. For example, the Council promulgated in the face of communities losing not only the sacred liturgical objects but their church buildings that

“’The sacred vessels… may be without any ornamentation, and the vestments may be made from a common linen.’ The council gives a spiritual meaning to this persecution that forces the Church to become poor and simple and a better witness ‘so that it may be known to all that the Orthodox Church appreciates its holy objects because of their inner significance, rather than for the sake of material value, and that violence and persecution is incapable to deprive the Church from its chief treasure – its holy faith, the pledge of its eternal triumph, for this is the victory that overcomes the world, our faith (1 John 5:49) ( p 150).

It was, apparently, the revolution, not the Council, that was forcing the Church to abandon its excesses in order to hold on to what is important and essential to Christianity. The Church is not about gilded ornamentation but about the Gospel of a poor and humble incarnate God. The Church is about God not gaud.   The Church was forced to embrace the poverty that Christ lived and taught. It was the loss of its material treasures that caused the Church to remember its true treasure—Jesus Christ. This certainly turns out to be a case in which the enemies of the Church in stripping away from the Church its possessions and privileges returned the Church to its fundamentals—the Gospel of Jesus Christ and the living faith of the people.

As the Council proceeded it made more decisions which were direct responses to the unfolding events of the Russian revolution. Critics of the Council began to complain that the Council members were being overly influenced by secular law and the demands of the moment. But the Council noted quite correctly that, “The fathers of the first councils had been influenced by Roman law…” (p 179). The Church has never existed in a vacuum.   Indeed the Fathers of the Ecumenical Councils did often accept Roman civil law and structures in shaping the Church in the Roman Empire.   That the Russian Council had to take the new Soviet law into account is a sign of the incarnational nature of the Church. Christians from the time of St. Paul had prayed for their civil leaders, even when they were not Christian or even hostile to Christianity.

“This is why the Council of 1917-1918 still interest us: it reminds us that the Church, in every epoch, even the most troubled, can only be built up again by posing apparently ancient questions in order to find new answers and thus pour an ever-new wine into ever-new wineskins, the wine of its own marriage feast”   (p 190).

Anthony8/27/2016 6:48 pm
Are we still referring to the laughably lamentable failed ''Great and Holy Council'' as such? Seriously. Anyways, with all due respect I can't really work out the point of this article. What apparently ancient questions was the Robber Council in Crete posing to find new answers? All it was, was an attempt by the hapless Phanar to cement his position as the neo -Papist ''Head of the Orthodox Church - first amongst equals [insert whatever other grandiose title you wish]'' and legitimise heresy in the form of ecumenism, whilst ''rubbing Moscow's nose in it''. He failed. Miserably. Sorry but this is just ridiculous. Why not just write about the Moscow Council without trying to equate it to the charade we all witnessed in Crete? Would have been more credible. You can't equate the two.
×