Eleven students of Eton College, the most privileged English school, visited Russia on a personal, non-official tour that included Moscow and St. Petersburg. The students became acquainted with their Russian counterparts, and also met with President Vladimir Putin. Bishop Tikhon (Shevkunov) of Egorievsk, Father Superior of Moscow’s Sretensky Monastery, talked with a correspondent of Pravoslavie.ru about how the trip was organized, and gave his impressions of the young British men. 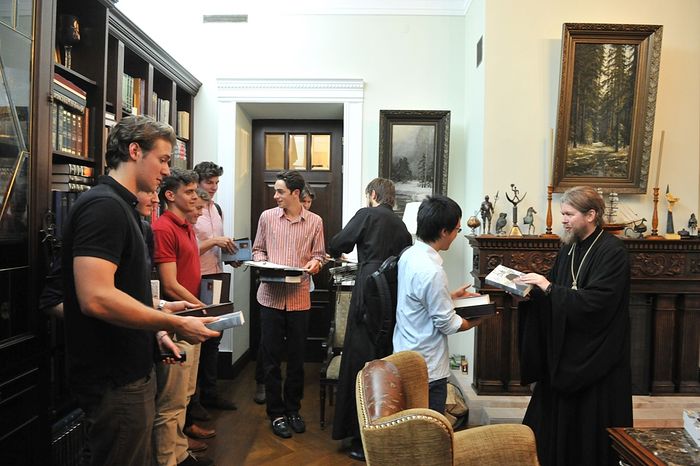 —Your Grace, in March of this year you were invited to Eton College to give lectures. Who was the initiator of that visit?

—The initiators, as far as I know, were the students, and the invitation was approved by the Provost of Eton.

—How were you received at the College?

—I was given a very warm reception; after the lecture I was asked many questions about the history of Russia, about its present, about Russian and English literature and culture, and of course, about the faith, about Orthodoxy. I have to say that they invited me also because several of the students had read the English translation of my book, Everyday Saints and Other Stories.

At the end of the meeting the lads asked me whether I could help them make a visit to Russia. I answered that of course I would gladly give them hospitality in Moscow and in Sretensky Monastery. Then they asked if they could meet with President Putin. The question was unexpected, to say the least. I answered that fulfilling their request would not be a simple matter. The boys asked me, “What do we need to do for this?” I replied, “You need to do what anyone does when they want to meet with someone they don’t know: write him a letter and ask for a meeting.” The lads wrote a very polite and sincere letter, and I gave it to the International department of the President’s Administration.

—But in the Western press we read that the meeting was prepared and arranged in total secrecy.

—That’s not true. Immediately after I learned of the young men’s desire to visit Russia and meet with our President, I informed the Eton College administration of it. I asked permission of the college Provost to give the students’ letter to the President’s Administration, and permission was granted. After some time had passed, when a preliminary positive reply concerning the meeting had come from the Russian side, the ambassador of the Russian Federation in Great Britain A. V. Yakovenko informed the Provost of Eton on its progress.

We included in the program visits to Moscow and St. Petersburg, showed them places of interest, and most importantly, acquainted the Englishmen with their counterparts in Russia. These were students of the Moscow State University and other institutes of higher education who happened to be in Moscow during the summer beak, as well as students of our Sretensky Theological Seminary who speak English.

Then there was a meeting with the President, at which only Vladimir Vladimirovich and the British lads were present. We know specifically what they talked about from what the boys themselves told us. They published their fresh impressions on the pages of social networks.

In the evening of that day we sent the students to St. Petersburg where they stayed for a day and a half, after which they returned to England. It seems to me that the boys were very pleased with their trip. Judging from their response, it made a huge impression on them; and, well, we were also very happy to show them hospitality. 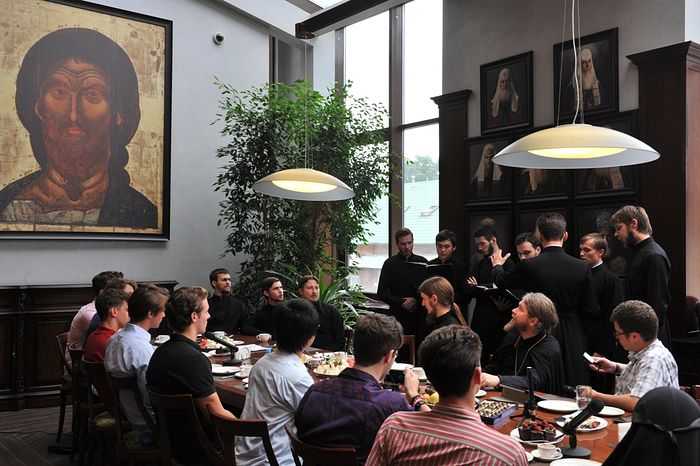 —How would you evaluate the reaction of the Western press, as well as of certain of our own press?

—With surprise. After all, what in fact happened? Graduates of an English college came to Russia and asked to meet with the President, and the President found the time to meet with them. Judging from the students’ stories, it was just as interesting for Putin to have a look at English youth, to spend some time with them, and ask them about the particularities of English education. I have no idea why the foreign and Russian specialists in the production of mountains out of molehills suddenly reacted with such distress.

No one hid anything from anyone. An active correspondence went on during the course of several months over the internet about this trip. The authorities at Eton were informed. And naturally the boy’s parents also knew about it.

I will also note that the meeting with the President was personal, unofficial, as our guests had requested. No television, no newspapermen were present there. A few photos were taken for the boys as a memento. That is all.

—The press also poses the question as to who paid for the trip. 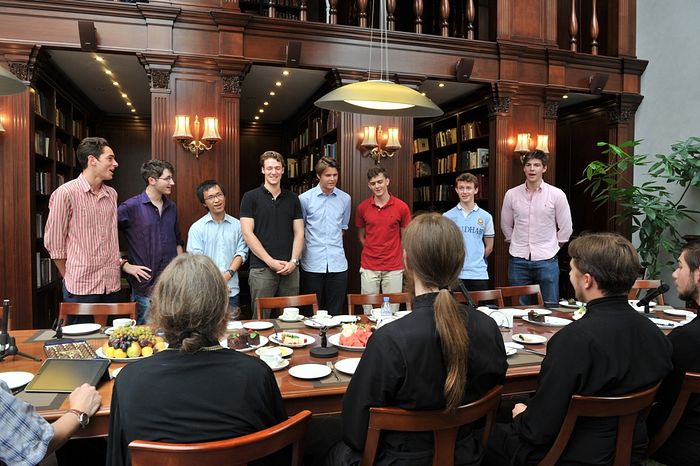 —All of these young men come from wealthy families, and so there weren’t any particular problems in this regard. Additionally, one organization that deals with support for student projects paid for the economy class airfare and economy rooms in a hotel (which was a good hotel, but with large discounts for the group). Of course we happily received and treated our guests to meals. It was the same at every other place they visited.

—What impressions did you personally have of the young British students?

—Perhaps we got lucky with this particular group of young men, but I will say without exaggeration: I think that they are the best that Great Britain produces today; the most worthy examples of what is being released under the brand, “Made in Britain.” And in this sense, I as an educator and rector am prepared to witness my admiration and respect for their parents, teachers, and mentors.

Eton College is an outstanding educational institution. Amazing is not so much the high level of educational preparation as the extraordinarily effective system of developing creative abilities in the students. This experience deserves all manner of respect and the most scrupulous study.

At the same time, the young men are very open, sincere, and modest (this, as it turns out, is specially inculcated at Eton), which breaks all our stereotypes of starchy, arrogant students from the most privileged English college. For example, they asked our seminarians to sing, and they themselves then sang “Jerusalem”, the famous poem by William Blake put to music and unofficial anthem of Great Britain. We could see how much this song means to them.

Of course, for the lads this trip was a real adventure. And in this sense I would like to congratulate them: The adventure came true; and I believe that for them it will remain an interesting, important, and unforgettable event all their lives.

In the next few days, the website Pravoslavie.ru will be publishing three articles in succession on all the meetings and tales of the British students about Eton, about their faith in Christ, and about the Russians’ impression of our guests. These sketches will be published in both English and Russian.

Bishop Tikhon (Shevkunov) of Egorievsk, was interviewed by Anton Pospelov Saint Edmund the Martyr, King of East Anglia and Patron-Saint of England

Saint Edmund the Martyr, King of East Anglia and Patron-Saint of England
Commemorated November 20/December 3
Dmitry Lapa
St. Edmund, whose name means “blessed protection”, was probably born in 841. He lived during one of the most troubled periods of early English history, when hordes of Danish pirates were devastating English kingdoms one after another, burning churches and monasteries, ravaging them, murdering Christians and all inhabitants.

Orthodox Church consecrated in Manchester, England
On 12th March, Saturday of the first week of the Great Lent, Archbishop Elisey of Sourozh (Moscow Patriarchate) celebrated the Consecration of the Curch of the Protecting Veil of the Mother of God in Manchester, belonging to the Patriarchal stavropegic parish of the Russian Orthodox Church.
Comments

Hieromonk Aidan9/3/2016 9:22 pm
A delightful read. It's a hopeful thing that these British students could have some firsthand experience of the revival of Orthodox Christianity in Russia, since the pointing of society towards the heavenly kingdom in Russia, the revival of Holy Russia, may be able to serve as a blueprint or at least an inspiration for the revival of the original Christian faith of the British Isles, which was one in spirit with Holy Orthodoxy of the East, although following Latin liturgy and customs.

May this be a sign of a coming revival of Holy Britain! First, God's own providence can bring down the evil rulers, and then through faith and repentance, the eternal kingdom can be instilled again in the hearts of the young people. For this is nothing other than the presence of Christ in people.

Rdr Andreas Moran9/3/2016 2:29 pm
I have to say that I think Anthony's assessment is not properly balanced. Of course, there are hooligans among the young men of England, as there are among those of other countries. I have taught in English universities for twenty-five years where nearly all the students were from ordinary backgrounds, and I found them to be all that one would like them to be. England may not be like the scenes from a Miss Marple film (though in some places it is) but the general attitude of most English people of all ages is still marked by the generosity, kindness and politeness for which English people are known.

Anthony9/2/2016 9:56 pm
''Perhaps we got lucky with this particular group of young men, but I will say without exaggeration: I think that they are the best that Great Britain produces today; the most worthy examples of what is being released under the brand, “Made in Britain.''

You certainly did get lucky your Grace. You certainly did. These lads are the exception rather than the norm in Britain. They represent an almost extinct breed. I speak as a Greek Cypriot who's spent around 18 years in Britain. Come to Ayia Napa, Cyprus and you'll see what Britain produces and exports today (besides illegal wars). Then look at the recent English football hooliganism in France as another fine example. And those disgraceful drunken violent episodes repeat themselves every Friday and Saturday night around Britain, and Mediterranean resorts. Gone are the days of the English gentleman. Sadly no country or nation, including my own is immune from acting in said manner. It's the anti Christian new world order attack on civilisation and traditional values that has brought the anarchy and chaos that we are witnessing, and which is increasing at an alarming pace year on year.
×