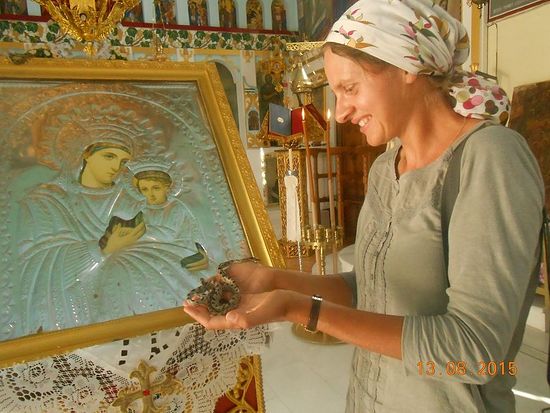 At the invitation of the Church, snake specialists will travel to the Greek island of Kefalonia to measure the temperature of the snakes living there, which, according to eyewitness testimony, gather at the place of a former monastery on the feast of the Dormition, and are warm-blooded, stated the head of the Association of Orthodox Scientists and rector of the church of the Holy Protection of the Most Holy Theotokos in the Voronezh region, Archpriest Gennady Zaridze in an interview with RIA-Novosti.

“From a biological point of view there’s no such thing as warm-blooded snakes. Therefore we want to invite reputable serpentologists form Moscow to Kefalonia to describe these snakes and measure their temperature,” stated the priest, who for many years has studied Church miracles through natural means.

According to Zaridze, on the island of Kefalonia on the feast of the Dormition of the Most Holy Theotokos venomous snakes come to the place where formerly there was a women’s monastery, but bite no one. A tradition has been preserved that pirates once docked at this island and wanted to ransack the monastery, and the sisters fearfully began to pray to the Theotokos at her icon on which there were drawn snakes. When the pirates came to the monastery bell tower, snakes slithered out and darted towards them. The pirates ran for their ship and in fear sailed away.

“Since that time on the feast of the Dormition the snakes gather at the place of the former monastery. And in those years when it doesn’t happen there are earthquakes and natural disasters. But the matter is not even in this concurrence, but in that these snakes are warm-blooded!” assures the priest.

Also, according to him, the temperature of the holy relics of St. Spyridon of Tremithus, who died in the fourth century, is 36.6 degrees Celcius, which is impossible to explain within existing scientific theories.

“Through contemplating these facts a scientist—if he is consistent and honest—comes to faith, like the apostle Thomas, inserting his fingers into the wounds of the risen Savior. In our rationalistic age the words 'science has proven' have acquired a weightier status, with the press more often using the expression, 'scientists have proven.' That is, modern people, like the apostle Thomas, demand proof of this or that phenomena. It is easier to believe in a miracle if it is supported by science,” said the head of the Association of Orthodox Scientists.

This interregional education public organization unites over 500 researchers. Individual organizations exist in Voronezh, Moscow, St. Petersburg, Orel, and other cities of Russia, with ten affiliates active abroad. Among the members of the association are 130 Russian doctors of science and a number of prominent foreign researchers. A blind woman’s sight was restored before Great Martyr George's relics in St. Petersburg
We always tend to rely on a miracle in our faith. But the Lord works miracles precisely in the moments when we really need them.
Comments

anthony9/6/2016 1:19 pm
Strange the way modern priests and theologians love to nitpick passages from Holy Scripture that suit their modernist agendas. Christ told St Thomas to touch his hand and after that what did he say? Blessed are those who have not seen and yet believe. Be not unbelieving. That pertains to all aspects of spiritual life. Just like those who try and bring science into the spiritual life in respect of Creation with their junk science evolution. Father Seraphim Rose's nemesis Ron Haler springs to mind. (Look where he ended up.) Faith and knowledge of God including miracles such as the above cannot come from the broken mind. It comes through obedience to Christ's commandments prayer and humility along with practising the other virtues. And then you have the heretical latins who tried to do scientific tests on Holy Communion to *prove* bread and wine becomes the Body and Blood of Christ. Kyrie Eleison.
×