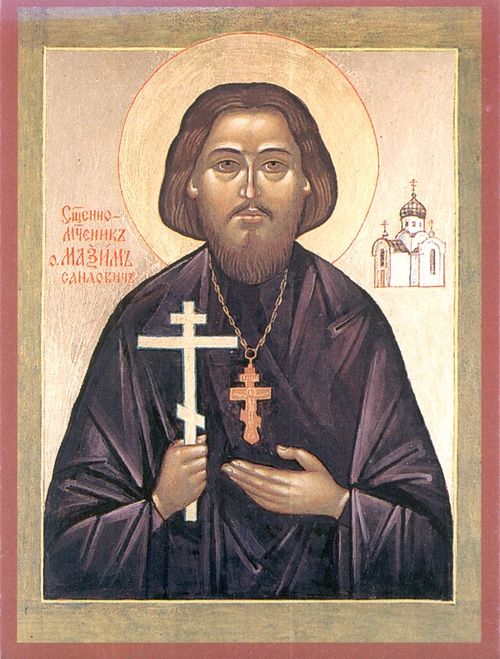 St. Maxim was born in 1886 in Zdynia in the Lemko region of Carpatho-Rus which was then a part of the Austro-Hungarian monarchy in present day Poland. His father, Tymofej, was the cantor of Zydnia’s Greek Catholic church. After completing his education in the nearby town of Jaslo and Nowy Sacz, he entered the Greek Catholic Basilian monastery in Krakow. Dissatisfied with the attempts to Latinize the Eastern rite to make it more acceptable to the Roman Catholic majority and also attempts to denationalize the Rusyns, he crossed the border into the Russian empire and entered the famed Orthodox monastery at Pochaev. It was while at the monastery that his outstanding potential attracted the attention of the illustrious Bishop Anthony (Khrapovitsky) who enrolled him in the Orthodox seminary in Zhitomir. 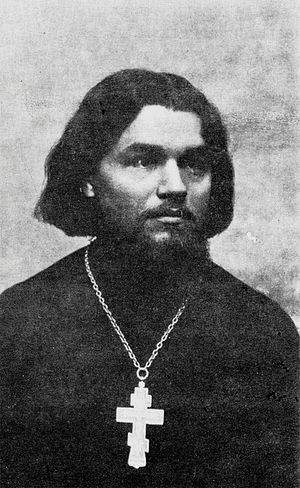 Fr. Maxim He completed his seminary studies in 1911 and that same year married Pelagia Grigoryuk and was ordained to the Holy Priesthood. At that time in the Lemko region there was a growing movement away from the Greek Catholic Church to the Orthodox Faith of their ancestors. Fr. Maxim returned home to serve the Orthodox faithful in the villages of Hrab, Vysovatka and Dovhe. After serving his first Divine Liturgy in Hrab on December 2, 1911, the Austrian authorities, suspicious of the Orthodox Faith for its alleged Russian sympathies, issued an order forbidding any further Orthodox services. Fr. Maxim ignored the order and continued to conduct services in village homes. He was repeatedly fined and held under temporary arrest. Before Pascha in 1912, he was again arrested with his friend and spiritual father, Father Ignatij Hudyma, and held in prison for two years in a Lviv prison until their trial began on March 9, 1914. After being found not guilty he immediately returned to his native village and continued minister to his Orthodox parishioners.

With the outbreak of World War I, Fr. Maxim was again arrested and imprisoned on August 4, 1914 along with his entire family. Fr. Maxim, his father, mother, brother, and wife were forced to travel on foot to the prison while being prodded by the bayonets of the soldiers. In prison they were placed in separate cells and denied the opportunity to see each other. This time, however, there would be no court trial. On the morning of September 6, Fr. Maxim awoke in his cell and read his morning prayers as usual. Austrian soldiers led the twenty-eight year old priest from his cell to a wall in the prison courtyard where he was bound and blindfolded. As he was being led from his cell Fr. Maxim realized where they were taking him and humbly and with dignity asked, "Be so good as not to hold me. I will go peacefully wherever you wish."    There they ripped his priestly cross from his chest and threw it to the dirt, marking an “X” with chalk over his heart for a target. Before the command to execute the priest was given, Father Maxim was heard to shout:  “Long live the Rus’ people, long live Orthodoxy!”  As the shots rang out the martyr slumped to the ground. To assure that he was dead three more blasts of a revolver were emptied into his head. On September 12, St. Maxim’s father, his pregnant wife, and brother were sent to the concentration camp at Talerhof in the far western part of the Austro-Hungarian Empire. While in the camp Pelagia gave birth to a son she named Maxim in honor of his father. Like his father, the younger Maxim also entered the priesthood serving the Lemko Rusyn people faithfully until his death in 1991. 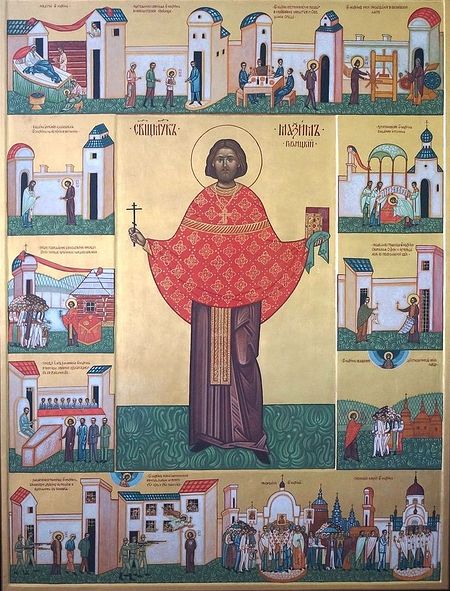 In September 1994, the official glorification of St. Maxim began in the courtyard of the Gorlice Court House where the saint had been martyred, where a bronze plaque marking the tragic event was placed on the wall. Following this service, a procession of hierarchs, including our Metropolitan Nicholas of blessed memory, clergy and faithful entered the Holy Trinity Church in Gorlice for the service of glorification.

For the glorification of a saint, ordinarily the saint’s relics would be exhumed from their grave and transferred in procession to the church. The bishops of the Orthodox Church of Poland decided to delay the transfer, fearing it would provoke the areas’ Roman Catholics who reluctantly tolerate the Orthodox presence. Finally on September 5-6, 2007, the martyr’s relics were transferred from the village cemetery in Zdynia to the Holy Trinity Church in Gorlice, Poland where they are enshrined on the right side of the icon screen.

The Witness of Martyrs 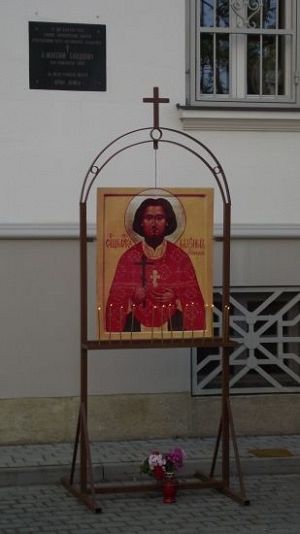 Our Lord said: Do not fear those who kill the body but cannot kill the soul. But rather fear him who is able to destroy both soul and body in hell (Matthew 10:28). The life of this new hieromartyr (priest-martyr) echo the words of Jesus. St. Maxim had no fear of threats from the government, imprisonment, abuse, insults and even a firing squad. When this newly-ordained priest was arrested for serving an Orthodox Divine Liturgy his first action on being freed was to immediately return to his flock and resume his priestly ministry. The Lord’s words in the Book of Revelation apply well to St. Maxim:  Be faithful unto death and I will give you the crown of life (Revelation 2:10).

In my many years working as a hospice chaplain I have often been summoned by doctors and nurses to the bedside of a terminally ill patient who is fearful of his approaching death. These medical professionals assume, rightly so, that it is primarily an active faith that can help a person face this fear. The promise of the Lord Jesus to us is that if we believe in Him and our lives are joined to His we have nothing to fear in death. But while the death and resurrection of our Savior have removed our fear of death, Jesus does not desire that all of our fears vanish. He does want us to be afraid of something! He wants us to be afraid of the right things, to be fearful of things that should be fear:  ...fear him who is able to destroy both soul and body in hell. What shall it profit a man if he gain the whole world and lose his soul? (Matthew 16:26). The life of St. Maxim Sandovich, faithful priest shines forth this truth!

Moved by the providence of God to go to Mount Pochaev,
there to learn the rightness of the Orthodox Faith
you attained unto true teaching in the city of Zhitomir
and returned to your own country as a brave warrior of Christ.
For Orthodoxy and your people you received the crown of martyrdom
and thereby made your native land steadfast in the Holy Faith.
O hieromartyr Maxim, entreat Christ God that our souls be saved. Priestmartyr John Kochurov
On October 31, 1917, in Tsarskoye Selo, a bright new chapter, full of earthly grief and heavenly joy, was opened in the history of sanctity in the Russian Church: the holiness of the New-Martyrs of the twentieth century. The opening of this chapter is linked to the name of the Russian Orthodox shepherd who became one of the first to give his soul for his flock during this twentieth century of fighters against God: Archpriest John Kochurov. Greater Love Hath No Man—New Martyr Metropolitan Benjamin of Petrograd
A few months later the God-hating communists came to power and began dragging the Church to her Golgotha. It was a time of choice—between a martyric confession and the kiss of Judas. Inspired by that master deceiver and father of lies, the communists tried to conceal their base intent. They were reluctant to make known their militantly antireligious policy, and publicized their actions as assisting the good of the majority, twisting opposing religious conviction into censurable political dissent. But they were hard pressed to catch in their nets Petrograd's chief hierarch
Comments

Archpriest Seraphim Stephens10/10/2020 6:51 am
I would like to buy a copy of the Icon of Sr. Maxim Sandovich with his life in small icons around the central icon. Where might I find this icon. Thank you.

Barbara Kulenicz Peters3/12/2020 4:53 am
Thank you for bringing this history to us. Our grandparents and ancestors lived in Peregrimka. Aka Pielgryzmka centuries

Natalie Ceja3/11/2020 4:25 am
My mother was born and lived in Ustye Ruske. When she was a young girl, their village heard of this young priest and that he was going to be in a village not far from where she lived. She and a cousin, or niece, traveled to that village where he was to be. She and her niece sang responses along with others. She passed away in 1995, but she lived long enough to hear of his martyrdom (I don't know if I'm saying that correctly). She had a picture of him hanging on the wall in her dining room. My mom was born in 1896. Her maiden name Humetsky, father's name Nicholas, mother, Natalia.
×