The History of the Monastery of Varnakova 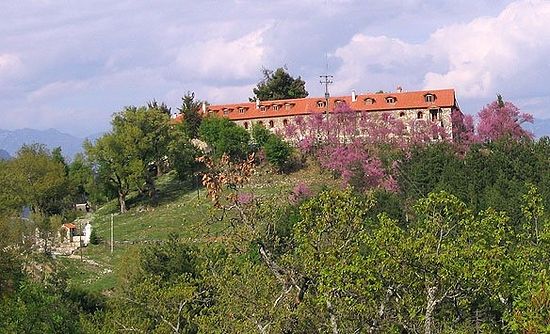 Monastery of Varnakova as seen from a nearby road


The Byzantine monastery of Varnakova lies some 45 minutes to the East of Nafpaktos, on the old road to Lidorikos, beyond Efpalio. It was built in 1077 by Saint Arsenios Varnakovitis, on a small hill which lies within a vast forest of oaks and wild chestnuts. 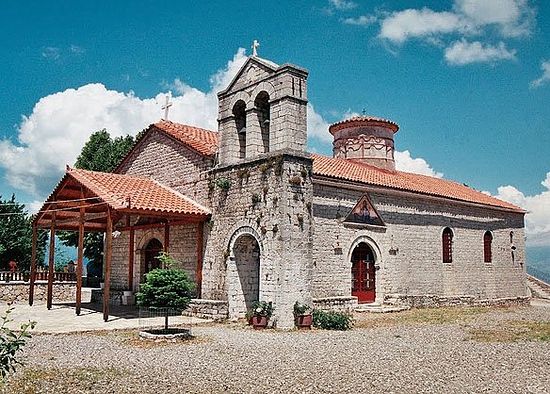 
The katholiko (main church) is in the style of a basilica with a cupola, while the floor is made of wonderful opus sectile marble, dating from the 11th century.

The Comneni emperors of Byzantium assisted the monastery financially and granted it extensive holdings in the Mornos valley, stretching as far as the sea and islands in the Gulf of Corinth. 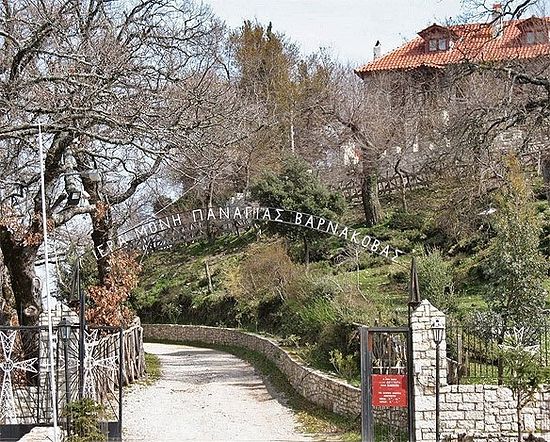 Entrance of the Monastery Varnakova


Later, under the Latin occupation, the monastery was subject to the Greek state of the Despotate of Epirus. The Comneni rulers loved Our Lady of Varnakova so much that they chose the katholikoof the monastery as the place where they would be buried. The archaeologist Orlandos discovered their tombs underneath the floor of the inner narthex in 1919 and the monastery has kept the grave-stones. 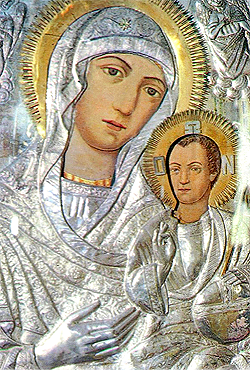 The icon of Our Lady Varnakova
In 1826, the monastery was partially destroyed by the Turks and was renovated by Ioannis Kappodistrias [the first ‘Governor’ of Greece after the revolution of 1821 and a most remarkable man] in 1831.

The history of the monastery really is astonishing. It has made a great contribution to Greece, not only in economic terms but also on a much deeper level. The Monastery of Our Lady Varnakova, through her grace, has been a spiritual treasury both for Southern Greeks and for every pilgrim. It’s been a sacred refuge in the deathly chill of every form of slavery and misfortune. The warmth of life, the God-given consolation, as in every holy monastery which has assisted the faithful in their upward progress throughout the centuries, but particularly in the harsh days of the Turkish and Venetian occupations, and of our modern materialism.

The first blow the Monastery of Our Lady suffered, occurred in the latter half of the fifteenth century. Although it had managed to avoid the worst of the Frankish occupation and the envy of the Latins, because it belonged to the Despotate of Epirus and was protected by the Komninos overlords, when the Turks started taking over Greece, it suffered its first catastrophe. According to the information we have, the monastery was set on fire and partially destroyed. With the assistance of the Mother of God, however, it continued its God-pleasing task of being a divine workshop of virtue and purification for souls who love God.

It suffered a second blow from the Turks in May 1826, in a revenge attack for what it had done and struggled for during the four hundred years of Greek enslavement to the Ottomans. It harboured, nourished, comforted, supported, protected, educated (through its secret school) and, finally, fought at the side of the suffering, disaffected Greeks who paid the price for their freedom. 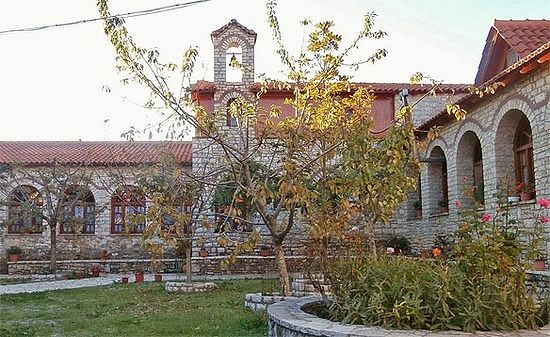 After the exodus from Messolonghi, the monastery welcomed a group of the heroic women and children who, although they’d sought refuge in Aï-Simio, Arvanitia, were expelled and hounded until they arrived at Varnakova, where they found a warm welcome and were well treated. Later, for greater safety, they were spirited away to Salona.

There followed, on 3 May 1826, the siege of the monastery by the forces of Kioutakhi. After heroic resistance on the part of 150 defenders of the monastery, who held out for 23 days against 4,000 Turks, the soldiers and monks were forced to leave on 26 May. The Turks took over the monastery and blew up the main church. 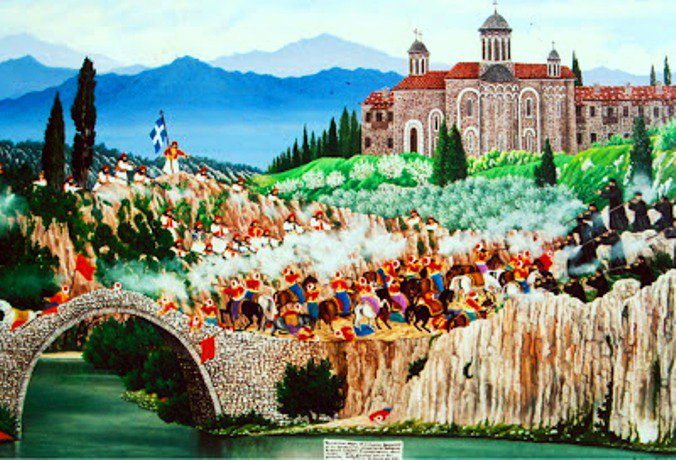 
Varnakova was a whole-burnt offering to freedom. The Varnakovite monks gave their blood, sweat and tears to Christ and their beloved homeland. May their souls rest in peace and may we have their blessing. They left us an example of sacrifice and of how to live. 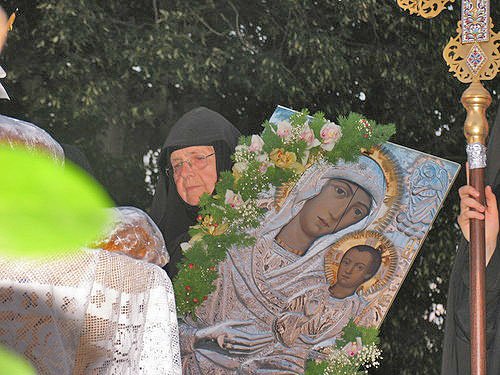 Procession with the icon of Our Lady Varnakova


The greatest and most sacred story is that which has been written by the Mistress of the World in her holy shrine over the last thousand years. It’s the story of her loving-kindness, of her gifts and her love. She’s a vigilant and ceaseless intermediary for us to Christ the Saviour, for all the faithful who ask for her intercessions.

At the beginning of August 2014, a young lady who is very precious to us was suddenly taken very ill while visiting a friend. She lost feeling in her arms and legs, her fingers and lips turned blue, her blood oxygen fell to dangerous levels. She was rushed to hospital and placed in intensive care with oxygen and a breathing apparatus, with only minutes to spare before she would have passed away. The first, tentative diagnosis was Guillain–Barré Syndrome, then Transverse Myelitis was considered, as were copper poisoning and West Nile fever (we’ve been plagued by mosquitoes in Greece this year). As yet there is no definitive diagnosis and a leading expert who was called in has declared himself baffled. After a very worrying week or so, our koumbara (whose maiden name was Komninos!) arrived with a gift: a small paper icon of Our Lady of Varnakova which had been placed on the original icon and had absorbed some of the myrrh which flows from it. The young woman’s mother took the icon and blessed her daughter by placing it over various parts of her body. Since then her condition has shown a marked improvement with which the doctors are most impressed. She is still in intensive care, but is now able to breathe with less assistance and can move parts of her body. The prognosis is difficult, but by God’s grace and the help of His Mother all will be well. (WJL) Ten Most Beautiful Orthodox Monasteries in the World
Andrew Segeda

Ten Most Beautiful Orthodox Monasteries in the World
Monasteries have always been the strongholds of Orthodoxy and bastions of spirituality. From the foundation of a monastery cities would often spring up. In ancient times chronicles were kept and scholarship was developed.Orthodox monks supported the starving in years of crop failure, cared for the sick, and most importantly, always stood at the front lines of spiritual warfare—praying to God for the whole world, for every one of us. The most unusual fresco of Virgin Mary by famous Georgian artist Lado Gudiashvili
If you have ever visited the famous Saint George’s Kashueti Church on Rustaveli Avenue, a mesmerizing fresco of Virgin Mary holding little Jesus in her hands above the altar would have definitely drawn your attention. In comparison with other traditional frescoes of the Theotokos, this one stands out for its earthly appearance and unusual colors. Many people, including locals, may not know that this is the masterful work of an outstanding 20th century Georgian artist, illustrator, graphic painter and theater decorator Lado Gudiashvili. The Goritsky Monastery: History within a stunning landscape

The Goritsky Monastery: History within a stunning landscape
One of the most picturesque cities on the Golden Ring, Pereslavl-Zalessky offers visitors a number of historic buildings to explore.Facebook
Comments
×