A Discourse on the Sacrament of the Priesthood 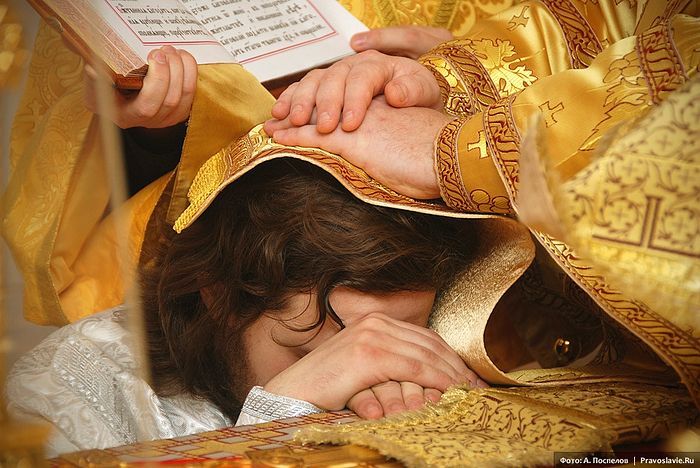 As part of the special project “Sacraments of the Church” Archpriest Artemy Vladimirov speaks on the essence and meaning of each of the seven Sacraments: Baptism, Chrismation, Repentance, Communion, the Mystery of Marriage, the Mystery of Ordination, and Unction.

Today we will speak about the Sacrament of Ordination, of its mission, what is entrusted to the priest, how should be arranged his heart and soul, his inner life, and the responsibilities of pastors.

Today, dear friends, let us set out by casting our minds unto that day of the Cross of Pascha—Holy Friday, when the Great High Priest, our Lord Jesus Christ, God in the flesh, bore Himself in sacrifice to Golgotha’s Cross, extending His hands, nailed to a tree, in order to embrace and attract to Himself all the sinners, penitents, and those with hope for the salvation of mankind in Him, the Lord.

Today’s conversation is devoted to the Sacrament of the priesthood, of ordination into ministry as a priest of God. Over the worthy it is celebrated, over the Church’s declared appointees, persons of Orthodox creed of the male gender who comply in their moral qualities with the strict screening of the Church. As an ideal the priest should preserve purity moral and bodily, chastity, and virginity until his personal self-determination in choosing the path monastic or to enter into a legal, crowned marriage with a maiden of Orthodox confession. This young man ought be of enlightened conduct and a churched mind and heart. For the future presbyter the Scriptures themselves, the books of the Prophets and Apostles, the holy Psalter and the Gospels are the essence of the heavenly bread with which he strengthens daily his heart.

Within the Divine Liturgy is Ordination always celebrated, and under the hands of the hierarch the hand-picked successor inclines his knees, a deacon in our instance, bowing towards the Altar his head as the entire church prays that upon him would descend the grace of the Holy Spirit.

Indeed, once Christ Himself chose from among those surrounding Him His closest followers and disciples and them led upon the mountain, where to each He presented a new name. Simon became Peter, while John and James received the appellation Boanerges—“the Sons of Thunder.” And so with us it is, twenty centuries on, when by the prayers of the Church by means of hierarchical hands descends Divine energy, which overshadows the mind and heart of the appointed and to him gives new thoughts, new feelings, and clothes him in the new power of the Lord Jesus Christ, gifting him the grace of fatherhood, the Divine empowerment to enlighten the people, the faith to them to teach, and subsequently when found to be worthy are the catechumens, to celebrate over them the Sacrament of Baptism in the name of the Father, and of the Son, and of the Holy Spirit. Not merely a missionary by designation is a priest, not simply a celebrator of the Sacraments or a housekeeper: he is a man through whose hands God’s grace in the Sacraments, in Baptism and the Eucharist above all, nourishes the hearts of believers. Then again, he is also the pastor of rational sheep: the ability to edify the followers of the Lord by the doctrines of Christ the Lord has given to him, to manifest for them spiritual care through Confession, through verbal communication, to direct and guide them in the laws of spiritual warfare, to go in front of his repenting family, serving all in a Christian manner, as a specimen of faith, purity, truth, and love. 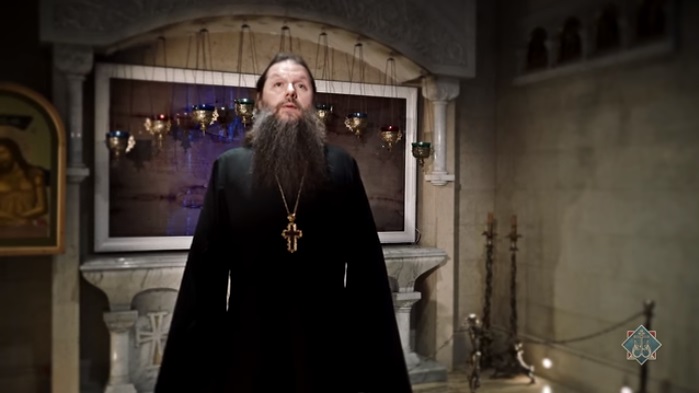 And so, today, contemplating the Cross, the words of the Savior come to pass: And I, if I be lifted up from the earth, will draw all men unto me. And until now this grace of the Cross attaches to priests and clergy who preach and instruct the immortal human soul. However, we would vainly think that the priestly charisma makes its possessor and bearer already capable of qualitatively, to the glory of the Lord, by the strength of the Holy Spirit, this burdensome ministry performing. No, a priest is called, preparing himself for the laying-on-of-hands (ordination), whether having studied in seminary or taken up parish practicum, to be continually himself amending from the worse to the better, to broaden his mental horizon, and firstly—the depths of his own heart to seek, that in the center of his immortal soul would shine the spark of unceasing mindfulness of God. The priest yet more than the anchorite or the monk of a cenobium stands in need of the acquisition of the spirit of prayer—he is called everywhere and at all times to with attention and heart, with compunction of heart together with simplicity and meekness of soul call upon the name of the Lord Jesus Christ. When the priest acquaints himself with that upon God are fixed his mind and heart, when through liturgizing he is wont to come before the Lord Jesus’ invisible countenance, then anointed with the Divine grace will be everything about him—his appearance, and movements, and word, and his very intentions, and thoughts, and everything which makes an hortatory contact between this pastor’s personality and his sheep, whether near or far they be.

Let us note that in our time in Russia the priesthood is more than a necessity. The priest, in the ideal, is a hero of our times, because coinciding in his service are education, paternity, pastorship, and the art of healing. Truly, Divine grace by faith in the Lord Jesus Christ, gazing from the heights of the Cross upon us, through the hands, mouth and sacred rites of the pastor, operates unintelligibly and incalculably. Why, when to us humble and simple priests come the people with the words: “Batiushka, pray for me! Batiushka, nearer to God are you—beseech the Creator that He might bestow upon my ailing son health,” do we always shudder (I mean pastors)? Because we grasp in the fifth, tenth, one hundredth time with what reverence our people perceive the grace of the priesthood, resting upon such unbecoming, sinful, and delicate shoulders.

Let us ponder, dear friends, how we in the very word “batiushka” relate to our clerics, and how an analogy for such a word in German, English, or French is hard to find. From the word “batiushka” blows something patriarchal, tender, warm, simple, and heartfelt. And thusly should be—of this I am deeply convinced—pastors in Russia. The people from us expect not that we come walking upon the water, nor with healing gifts, but today the priest should be an exemplary Christian, of chaste and irreproachable life: an honest parent, a faithful husband, a man attentive and responsive, quick to render spiritual or some other type of help, welcoming and smiling, not proud, not arrogant, not resentful, not biased, as says the Apostle Paul concerning wine, not a drunkard, not a striker—he is called, foremostly, to uphold his own home in order, and his children, iffen such he has, to rear up in the teachings of the Lord.

“I don’t think,” ruminates St. John the Golden-Mouthed in one of his homilies, “that many priests will be saved.” Yes, truly: to whom much is given, from him much is required. Temptations by an unworthy pastor perpetrated strike against the Church a hundred times more forcefully than the reprehensible conduct of the rational sheep—this is why it’s a fearful thing to be a priest and be disillusioned in your service. It is frightful, Divine grace to receive and conceal it under a bushel. The Holy Spirit, Who alights upon pastors, presupposes a habitual dynamism, development, aspiration towards self-perfection, and firstly: unceasing prayer, and a repentant appeal of the mind and heart of the clergyman to the Creator. Living water is that water finding itself in motion. Conversely, standing blooms and decays. Here, this is why batiushka never must in his internal world and conscience rest on his laurels. Today is the time neither for vainglory nor for despondency: the Dread Judgment draws near. However, the time to disseminate to those around us light and purity, humility, meekness, and love in that measure to which we labor over the purification of our own hearts is given.

A priest is a man standing before the Throne of God. For us the Divine Liturgy is the threshold of Paradise on earth, if not the very Heavenly Kingdom. If over his conscience a priest keeps watch, and is acquainted to regularly by Confession cleansing it, if he hungers and thirsts constantly for holiness, communing of the Holy Mysteries of Christ, feeling himself to be the happiest, most blessed man on earth, then, according to the law of communicating vessels, his parishioners, his flock unknowingly apprehends to themselves from batiushka these holy intentions for the rectification of their souls.

Accordingly, we, pastors, finding ourselves in the crosshairs always of dozens of gazes, or, as says Patriarch Ilia II of Georgia, “under the x-ray of people’s attention,” must never resemble the Pharisees and hypocrites, and seek not cheap popularity, but even if we perform some blessed deeds in view of others, we are called to shower our inner selves with thousands of reproaches, cognizant of ourselves as unprofitable servants who have done but that which we were called to do—maybe not in that volume and quantity—but, it means, conscious always of our failings, we plunge ourselves t’wards the feet of our Lord Jesus Christ.

“If all priests,” as St. John of Kronstadt was wont to say, “were such as they should be, satan would have nothing to do in our cities.” The priest is the apocalyptic angel of the Lord God Almighty, and, beholding our preceptors, holy and pious pastors, we, modern priests, are summoned in unity with the hierarchy our own hearts to edify, and human souls to heal, not for the sake of filthy lucre, not for the sake of vainglory, but to the glory of the Lord, Who, gazing upon us from Golgotha’s Cross, Divine strength gives us to bear the candle of the priesthood unto our victorious end. How to Avoid the Priesthood
Priest Sergei Begian

How to Avoid the Priesthood
Priest Sergei Begian
The man being consecrated to the priesthood is ascending, as it were, to Golgotha, but it even fills him with joy, just as it filled certain martyrs who were going to their own executions. It is as if the Lord carries the one being ordained in His hands, grace abounds, as if giving the newly-consecrated a foretaste of what he will later have to labor with sweat and blood for. "I Dreamt of the Priesthood Since Childhood." A conversation with the First Hierarch of the Russian Orthodox Church Outside of Russia
Olga Tarasova

"I Dreamt of the Priesthood Since Childhood." A conversation with the First Hierarch of the Russian Orthodox Church Outside of Russia
Olga Tarasova
I was born in Western Canada, in the Province of Alberta, where there were a great many Ukrainian settlers. My parents immigrated to Canada in 1929 from Ukraine, which at that time was part of Poland. They had lived in Volhynia guberniya. After World War One, Poland was granted the western part of Ukraine—Volhynia oblast, Galicia, etc.
Comments
×