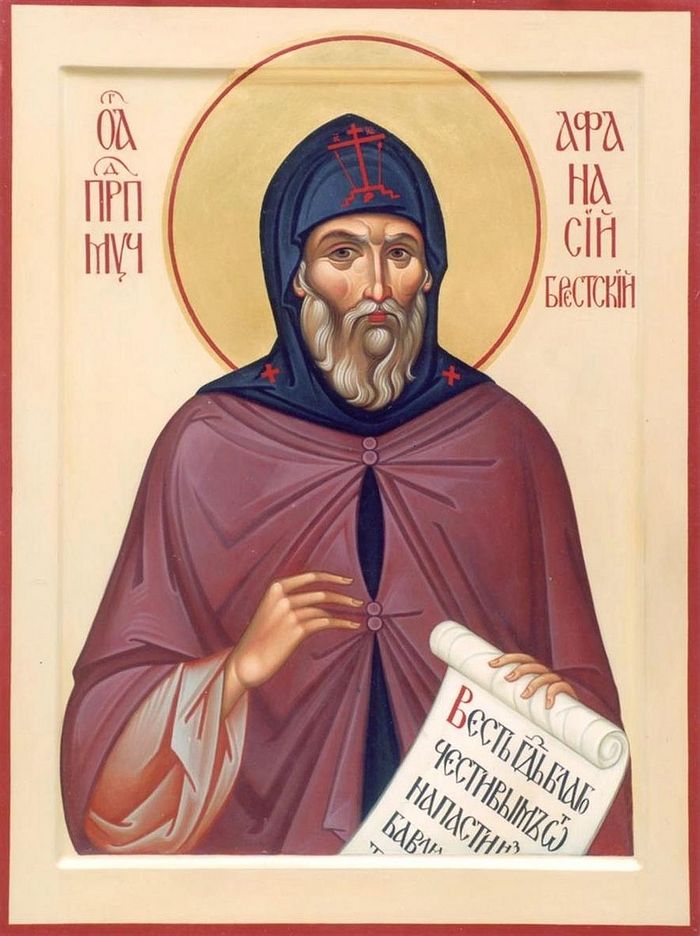 We remember today the blessed martyr, Igumen St. Athanasius (Filipovich) of Brest-Litovsk, the steadfast and learned monastic who together with his monastery resisted the Union of Brest, and who fell victim both to the hatred of the Jesuits and to the vagaries of Russian border politics.

Athanasius is the ecclesiastical name of this gentle monk, but we do not know his earthly name. We do know, however, that he was born around 1597 to a fairly well-to-do Belarusian family, and that he was tutored by an Orthodox parish school from a very early age, and later graduated from a Jesuit university. He kept a diary in his youth, and had a remarkable gift for languages, being knowledgeable in Greek and Latin as well as in Polish and White Russian. He made his living as a court tutor for the Polish-Lithuanian Chancellor’s family, as well as for those of several merchants of the realm. However, he found his monastic vocation in Vilnius, where in 1627 he joined the monastery attached to the Church of the Holy Spirit, and later the Holy Ascension Monastery in Dubovsk, where he was ordained a hieromonk. This monastery was seized by the Jesuits not four years later, however, and the monks of Dubovsk were relocated to Kupiaticka.

Athanasius distinguished himself as a monk by his care for his brothers and for the poor. On one occasion as he was travelling outside the monastery he met a lame man and bore him up on his back. This lame man spoke with him about matters of faith, and Athanasius took this incident as a sign from God that his podvig would be to struggle for the Orthodox way in the Polish and Lithuanian lands.

At another time, he was tasked with finding donors to his monastery for the task of rebuilding the Church of the Icon of the Mother of God. He prayed before this icon, and the Blessed Virgin appeared to him, telling him to go to the court of Mikhail Feodorovich, the Tsar of Russia, for help in building the Church, and he obeyed. The journey was long, arduous and dangerous, given the lawlessness that prevailed in that time on account of the Thirty Years’ War; but under the protection of the Mother of God, Athanasius reached Moscow in safety and was welcomed warmly by the Tsar, who proceeded to make a generous donation for the rebuilding of the church at Kupiaticka.

In 1640, Hieromonk Athanasius was elected to be the igumen (abbot) of the Monastery of St. Simeon in Brest, where he would live out the rest of his life struggling on behalf of the Orthodox Christians who lived in that city, who were discriminated against by the authorities for their faith and who were constantly being harangued by the Jesuits who sought to convert them to the Unia. Moved to pity for them, he exhorted the Orthodox believers of Brest to be strong in their faith, and eventually, again guided by the Holy Theotokos, he went before the Polish sejm. Taking the icon of the Mother of God of Kupiaticka and the cross with him, he appeared in Warsaw before the Polish noblemen and king, and he spoke out loudly against the Jesuits and the Union of Brest, saying that the Mother of God had warned him of God’s displeasure that the Orthodox Christians of Brest were so persecuted.

For his daring to speak thus before the Polish king, St. Athanasius was thrown into the dungeons and pronounced mentally ill, though in fact the good monk was simply following in the Russian tradition of yurodstvo—"foolishness for Christ." On the day of Christ’s Baptism, he escaped from the dungeon and went out into the cold streets of Warsaw wearing nothing but a cloak and cowl, running into the Latin churches and warning them of the punishment of God. The authorities were called, and they had him flogged and kicked, then thrown into a ditch. A Polish judge stripped him of his abbatial office and even of his status as a hieromonk, a judgement which was to be confirmed by Metropolitan Peter of Kiev. However, the Metropolitan refused to condemn the holy hieromonk, and reinstated Athanasius as the igumen of St. Simeon Monastery.

The persecutions of Orthodox believers in Brest resumed, however, and riots instigated by the Jesuits made it impossible for the Orthodox clergy to hold Divine Liturgy in their own churches. For a third time the Mother of God appeared to St. Athanasius; once again he was sent to plead the case of the Orthodox believers before the Polish King; and once again he was thrown into prison: this time on a trumped-up charge that he had conspired against the Polish kingdom when on his visit to Russia to raise funds for the Church. During his second imprisonment he wrote lengthy epistles to the Polish king denouncing the Unia, reminding the king of his promise of religious tolerance in his realm, and pleading that the Orthodox believers might be permitted to worship in peace; but the most the Polish king would do was to release him to Metropolitan Peter on the understanding that he would spend the rest of his days in Kiev and never again return to Brest as a monk or a priest. The Metropolitan gladly welcomed his brother in Christ, and Athanasius stayed at the Monastery of the Caves in Kiev as long as Metropolitan Peter remained alive. But he returned to Brest in 1647 upon the Metropolitan’s repose.

When the rising of the Zaporozhian Cossacks occurred the following year, Athanasius was taken prisoner for a third and final time, and charged, without a shred of proof, with having provided material support to the Cossacks in the form of smuggling gunpowder through the monastery (sadly a common charge against Orthodox churches by the Uniates even to this day). When no proof of material-smuggling was found in the search of the monastery, Athanasius was then charged with profaning the Latin Church and the Unia. When he again denounced the Unia before his interrogators, he was thrown into prison, where the Jesuits alternately threatened him with torture and cajoled him with freedom, if he would join the Uniates. The holy monk refused to renounce his faith, crying aloud, "Anathema to the Union!" On September 5, 1648 the monk was taken from the castle by the Polish soldiery into the forests outside of Brest, tortured cruelly with red-hot coals, flaying and burning, and forced to watch as his grave was dug. One last time he was told to renounce the Orthodox faith, and he refused. The soldier who was ordered to carry out the execution, seeing the steadfastness of the holy martyr, knelt before him and asked Athanasius’s forgiveness, before shooting him twice in the head. This failed to kill the holy saint, however, and the soldiers threw him into the open grave. The holy hieromartyr managed to cross his arms before he landed in the grave and was buried alive.

The students at the monastery school of St. Simeon described that night as one of terror for them; though not a cloud appeared in the sky, sounds of thunder were heard and flashes of lightning were seen. It was over eight months before the monks of St. Simeon dared to leave the city and look for the body of their igumen, having been told by a local boy where the monk had been executed; they had to steal out in secret to dig up St. Athanasius’s relics because the land still belonged to the Jesuits. When they dug up his body at last, his relics were shown to be free of corruption, and he was moved into the monastery and given a proper burial there.

The relics of holy Hieromartyr Athanasius have been translated several times. The Monastery of St. Simeon suffered a fire in 1815; the relics were found to be intact and reinterred beneath the altar when the church was rebuilt, eventually moved into the sarcophagus so the parishioners could pray over the relics. In 1893, the relics were transferred to the church named in the hieromartyr’s honor in Grodno; and some of the relics were subsequently moved to an Orthodox convent in the bordering province of Lublin; when the nuns were relocated first to Siberia and then to Paris, the relics of St. Athanasius went with them, before being restored to Lublin in 1996. The courage, the steadfastness in the faith, and the love for the persecuted by which the holy monk lived his life are virtues for which all Orthodox Christians should strive; and St. Athanasius of Brest-Litovsk remains a beloved source of inspiration for Russian and Polish Orthodox Christians alike.

Holy Hieromartyr Athanasius, Confessor of Orthodoxy, pray to God for us sinners! New Martyrs of Sakhalin
Nun Cornelia (Rees)
As Orthodox Christians not only in Russia but around the globe attended services and sang the praises of these righteous ones of the comparatively recent past, little did they suspect that two more Russians Orthodox Christians in the Russian far east would die that day, in a way that can only be called martyric. Who were these two martyrs, and what motivated the young man who everyone described as an ordinary Russian guy, indistinguishable from anyone else in the church until he opened fire on the worshippers assembled there?
Comments

Nisibis8/18/2018 5:20 am
We love you dear father, confessor and martyr! Thank you for being an example of true Orthodox Christian love. Please pray for all of us who are weak in faith and please continue to pray for Poland, that it may once again become Orthodox Poland!
×