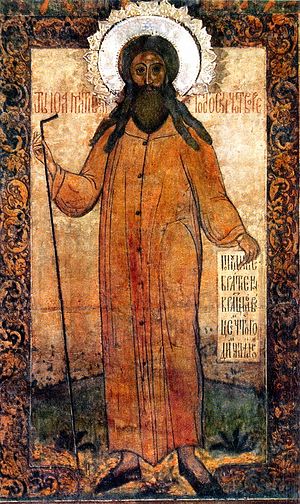 Living in humility, patience and unceasing prayer, he spiritually nourished many people, among them St Irenarchus, Hermit of Rostov (January 13). After a long life of pursuing asceticism, he died on September 3, 1580 and was buried, according to his final wishes, beside the church of St Blaise beyond the altar. Righteous Maxim of Totma, fool-for-Christ
He was made a priest, and for forty-five years he lead the ascetic life of a fool-for-Christ, abiding in ceaseless prayer, fasting, nakedness, and with total disregard for his own body. Feeling Like a Fool
Fr. Stephen Freeman
Since all of this is true, and pretty universal, it is deeply surprising to discover that there are great saints who have chosen to make fools of themselves for the sake of their salvation and the salvation of others. Holy Fools
In our faith, Holy Fools often serve the same purpose as their Old Testament counterparts: that is, to warn a city, or a parish or a monastery about their failings and turning away from God. But their behaviour often isn’t just that simple, and to be a Holy Fool is a difficult and dangerous calling. It requires someone to reject the values of the world, and sometimes, even to seem to reject the teachings of the church. They forfeit the acceptance of others, and they act in ways that often convince people they are insane. It’s not unusual for holy fools to spend time locked up in madhouses and asylums, or to find themselves mocked, beaten, and thrown out of churches and monasteries. It’s not a way of life most people can tolerate or understand, either to do it or to be around it.

St. Procopius, the Fool-for-Christ of Ustiug
July 21 (July 8)
Saint Procopius was a German Catholic. He was running a merchant business in Novgorod when he became enraptured by the beauty of the Orthodox services. He converted into Orthodoxy, gave his wealth and possessions to the indigent and became a monk at the Saint Varlaam-of-Khutyn monastery outside Novgorod.
Comments
×