Archbishop of Cyprus tells Ombudsman to butt out of religious issues 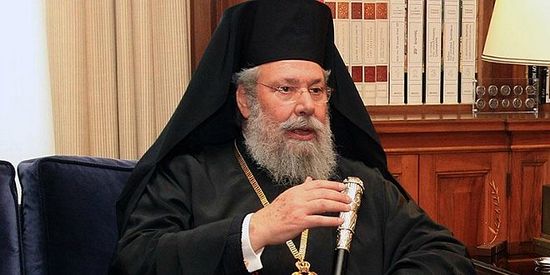 Head of the Cypriot Orthodox Church, Archbishop Chrysostomos II, lashed out at the report submitted by Ombudsman Elisa Savvidou regarding the initiative of a state nursery school to take its students to venerate holy relics at a parish church saying that she has overreached herself.

Speaking during Mega’s main news bulletin, the Archbishop said that the veneration of relics and icons was not a new phenomenon, stressing that: “It’s not the Commissioner’s concern how our people practice their faith. She is overreaching herself, it’s not her job. She shouldn’t involve herself with issues of faith, especially without asking us.”

The Archbishop added that teachers were obliged to offer not only knowledge and morals to the children but spiritual guidance too.

“This is our faith. We don’t force anyone to worship, it’s each individuals’ personal choice,” remarked the Archbishop.

The salvo came after Savvidou’s report was circulated in parliament on Wednesday.

In her report, Savvidou hit out against the Education Ministry following the administrative decision of a state nursery school to take its pupils to a church to venerate the “holy remains” and to receive communion without the consent of their parents.

Savvidou was alerted to the issue following a complaint submitted to her office against the Education Ministry by the President of the Cypriot Humanist Association, Viana Eriksson.

Savvidou’s report, dated August 30, 2016, strongly indicates that this kind of activity associated with the doctrine of a religion does not belong in schools as they are a synthesis of opinions and cultures and for this reason should remain neutral and impartial.

Paul Condoleon9/28/2016 4:36 am
Its an Orthodox country and as the Archbishop rightly notes, it has the right to practise its faith accordingly.

Glory be to God (Father, Son and Holy Spirit)

P.S How convenient that this idea of removing Christian worship is being applied across the Globe....truly the work of demons!

Anthony9/26/2016 6:09 pm
For once Chrysostomos has a point. The most laughable point of this is the person who heads the "Cypriot" Humanist Association is not even "Cypriot". She's a foreigner mischief making in our nation's internal affairs with local shills doing her bidding. It's high time these guests in our country learn their place and keep out of our country's business. We're Orthodox. High time people like this were given the boot back from whence they came
×