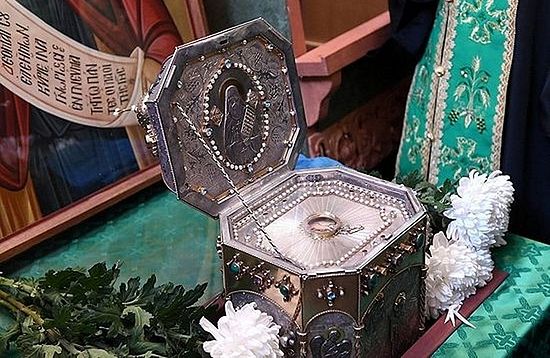 On September 24 the relics of St. Silouan accompanied by representatives of the St. Basil the Great Foundation and clergy left Moscow's Danilov Monastery – their final destination – and departed for the Russian St. Panteleimon’s Monastery on Mt. Athos where they have been kept permanently for many years, reports the St. Basil the Great Foundation’s website.

It should be noted that one more great Orthodox relic was brought together with the saint’s venerable head from Mt. Athos – the wonderworking icon of our Lord Jesus Christ before which Venerable Silouan had experienced a vision of the Savior.

In all approximately 315,000 people have venerated the relics of the holy elder Silouan the Athonite in Belarus and Russia.

The last pilgrims venerated the relics early Saturday morning before the patriarchal service. The reliquary with the relics stayed at the Danilov Monastery and in the afternoon the delegation of Athonite monks departed for Greece with the holy relics.

With the departure of the Athonite monks’ delegation the main Moscow celebrations of the 1000th anniversary of the Russian monastic presence on Holy Mount Athos came to a close. Patriarch Kirill, while opening the jubilee celebrations on September 21, referred to the first bringing of relics of Venerable Silouan the Athonite to the canonical territory of the Russian Orthodox Church on August 20 – September 24 as an historic event. The reliquary had never left the territory of Mt. Athos before.

From August 20 on the holy relics were also venerated in Minsk, Bryansk, Orel, Yelets, the Shovskoye village, Tambov, Yekaterinburg, and St. Petersburg. Moscow was the final destination in the Athonite monks’ itinerary. A miracle-working icon of Christ associated with St. Silouan to be brought from Mt. Athos to Belarus and Russia for the first time

A miracle-working icon of Christ associated with St. Silouan to be brought from Mt. Athos to Belarus and Russia for the first time
For many years the wonderworking icon, before which St. Silouan the Athonite was praying when the Lord Jesus Christ Himself appeared to him, was kept at the Russian St. Panteleimon’s Monastery on Holy Mount Athos permanently and never left it. Venerable head of St. Silouan the Athonite brought to Minsk (+ Photos)
At Minsk National Airport, the holy relic was solemnly met by clergy and laity headed by Bishop Veniamin of Barysaw and Maryina Horka. The hierarch accompanied the relic from the aircraft’s boarding ramp to the airport building and served a prayer service before the venerable head with clergy of the dioceses of Minsk and Barysaw concelebrating with him. Bones of a Christian saint uncovered in rubble of ISIS-destroyed monastery
The remains are thought to be of the namesake of the monastery, Saint Julian, who was martyred in 284 AD for refusing to deny his faith. The saint, who had healed the sick, was killed by his own father, a Roman officer.
Comments
×