History of the Rite of the Exaltation of the Cross 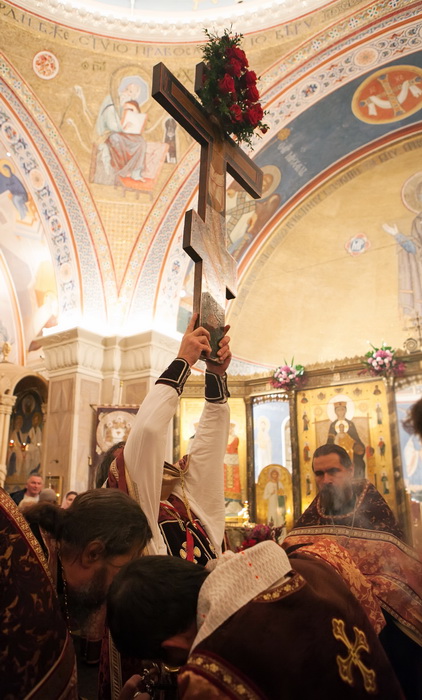 The special service at the end of the All-night vigil or the rite of the Exaltation of the Holy Cross was established in Jerusalem shortly after the Finding of the Cross. In memory of that event and the restoration of the Church of the Holy Sepulchre in Jerusalem. 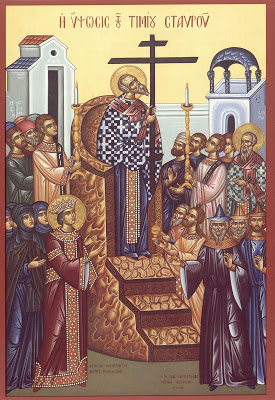 The Jerusalem Lectionary of the 5th century in Armenian language tells about the rite of the Exaltation of the Cross in front of the praying masses. In the Georgian version of the Lectionary of the 5-7th centuries there is a detailed description of this rite. It was held on September, 14(old calendar) and began at the third hour after the sunrise. The priests came into the sacristy, then vested, decorated the Cross (sometimes even three Crosses) and laid it on the altar stone. The rite included three episodes of exaltation (elevation) of the Cross. Each elevation was preceded by the prayers and chants and was accompanied by fifty “Lord, have mercy upon us” prayers. After the third elevation, the Cross was washed with aroma water, and people were allowed to venerate the Holy Cross. Then the Cross was placed into the altar stone again and the liturgy began.

By the 6th century the rite of the Exaltation was already known and performed not only in Jerusalem, but in other corners of the Christian world as well. According to the post-iconoclastic Great Church Typicon, in the Saint Sofia Church the Exaltation rite was held during the matins after the troparions to the Cross. The rite itself is described shortly: the Patriarch was standing on the ambon (a small rise with the stairs in the center of the church) while raising the Cross, at the same time people were exclaiming “Lord, have mercy upon us”. This was repeated three times. The picture of the priest raising the Cross became the traditional image of the feast’s iconography. 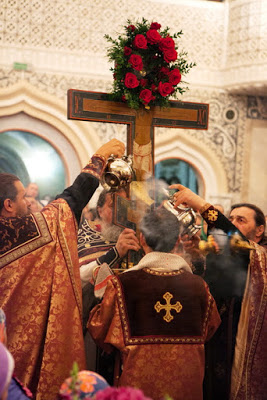 The Constantinople rite is described in the Dresden and Paris copies of the Great Church Typicon: during the matins the Patriarch with the Cross went to the ambon accompanied by the skevophylax or chaltulary and the singers (who sang the troparion to the Cross). When the Patriarch reached the ambon, he put the Cross on a small table and made three prostrations. Then the Patriarch began the rite, which consisted of three cycles. Each cycle included 5 raisings of the Cross. At first, the Patriarch came to the eastern side of the ambon and raised here the Cross. At the same time the deacons and all the other people exclaimed“Lord, have mercy upon us” 100 times. During the last three times of reading the prayer, the Patriarch made the sign of Cross to the East three times. Then the Cross was raised in the same manner to the South, the West, the North, and aging to the East. After a short rest, the Patriarch repeated the same actions, but the prayer was read 80 times for the second cycle and 60 times for the third cycle. After that people sang the Kontakion to the Cross and then the liturgy began.

In the Typicon of the Studite tradition, the rite of Exaltation is based on the Constantinople type, but is slightly simplified. It is included into the final part of the matins. Instead of three cycles there was only one, consisting of five raisings – twice to the East and one time for the other sides of the world.

According to the Studite-Alexian Typicon the rite was held in the end of matins after the reading of the Trisagion, the Troparion to the Cross and bowing to the Cross. The rite began with singing the three Troparions; the Cross was elevated by father superior in the altar from different sides of the world (the East, the North, the West, the South, and again the East). After the rite a litany was proclaimed and the first hour began. 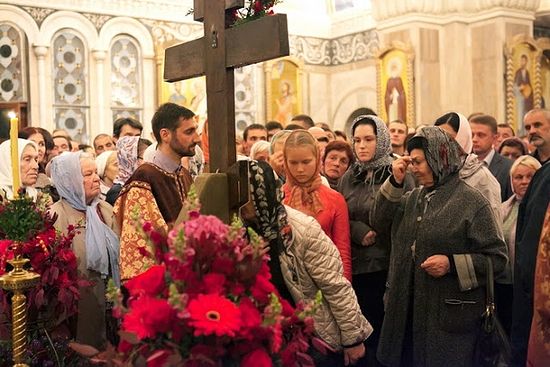 According to the Typicon of Evergetis the rite was held not in the altar, but in the church. After the Troparion to the Cross the priest made three times the sign of the Cross to the East and sang loudly “Lord, have mercy upon us” three times as well. Then he was raising the Cross slowly while singing the rest 97 times. After that the sacred action repeated to the other sides of the world: South, West, North, East.

In the Typicon of Saint George the Hagiorite describes two versions of the rite. The first one corresponds to the one described in the Typicon of Evergetis (but the order of the sides is different: East, North, West, South, East). The second version tells that the rite was held by the Patriarch, and its features underline the connection with the Great church (the chants after the entrance during the praises). 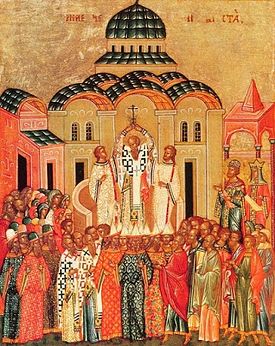 In the Jerusalem statute, adopted in the Orthodox Church in 13-15th centuries, the rite preserves the features, which are known from the Studite scriptures: it is held at the matins after the great praise and the Troparion to the Cross. The sign of Cross is made five times and the Cross is raised to the sides of the world (East, South, West, North, East). But there is an important change – five petitions by a deacon are included (at the time when the sign of Cross is made), and after each of them “Lord, have mercy upon us” is sung. Moreover, according to the Jerusalem statute, before raising the Cross the priest has to lean to the floor so that his head will be not higher that 20 cm above the floor. In the second part of the 17th century, when the liturgical literature was corrected in Russian Church, the order of the sides of the world was changed. The new order was: East, West, South, North, East. This order remains even today.

The rite of the Exaltation of the Cross is an inalienable part of the festal service. This can be proved by the variety of features, described in different scriptures. In some of them it is stated, that the rite can be held only by the Patriarch with the clergy, but according to the others a priest with a deacon can do this as well. For example, in 1301 the fathers of the Constantinople cathedral gave the answer to the question of Theognostus, the bishop of Saraysk, in which it was stated, that the rite can be led not only by a bishop, but also by a father superior. Saint Cyprian of Moscow wrote in his letter to the clergy of Novgorod, that the Cross should be elevated in any church, even if there is only one priest. The handwritten monastic Typicon of the 17th century says, that the rite should take place annually only in cathedrals, while in all other churches the rite in should be held only in case when the feast falls on Saturday or Sunday. 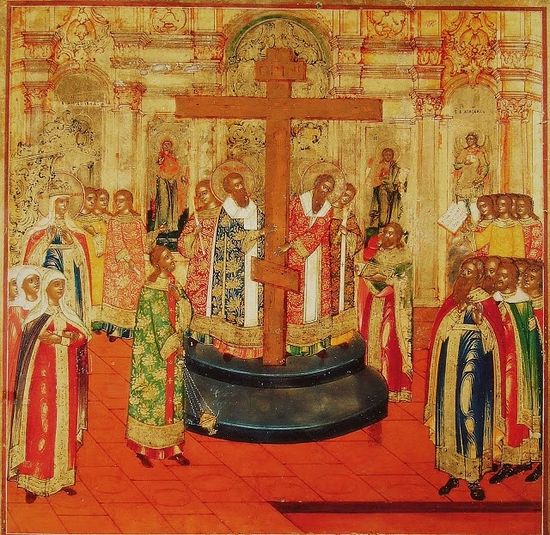 In old Moscow Typicon of 1641 it was written, that the Cross should be elevated only in cathedral churches and monasteries, while in average churches only worshipping of the Cross should take place. That instruction was later transferred to the new version of Typicon of 1682. Since that it is stated in all publications of the Russian Typicon. Nowadays in the Russian Church the rite takes place in all the cathedrals, while in monasteries and parishes it can be held with permission of the eparch. In the Church of Greece the rite can take place in any church.

According to certain manuscripts, when the rite of the Exaltation is held, the ektene of the matins can be cancelled, because some prayers of it are also included in the rite. Just like in the Jerusalem, the Cross is washed with aromatic water during the Exaltation. Imitating the Humility of God
The worldly person, whether Christian or not, only serves himself . He does so because he only loves himself. We are called to something else, something better then the pursuit of mere self love or popularity.