Sunday After the Exaltation of the Cross: On Denial of Self 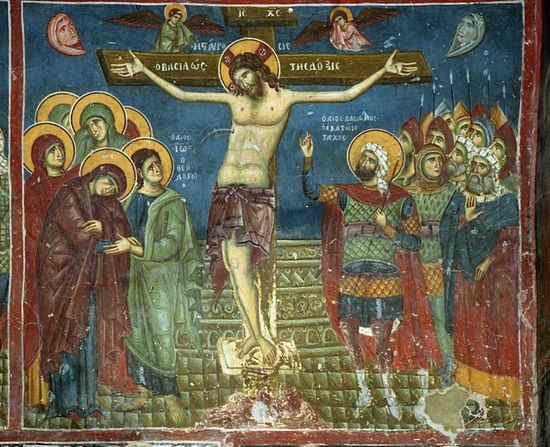 Brothers and sisters, as we celebrate today the leave-taking of the Great Feast of the Cross, we’re once again confronted with the paradox of our salvation: the instrument of Christ’s death has become the means of His victory over sin and death. The cross is, in the theology of the Church, “the trophy invincible, the weapon of peace because by it we gain eternal peace. In this way, the instrument of Roman torture and violence, laid upon Christ, has become the all-powerful symbol and witness of the healing from sin and the downfall of death. But on this Sunday, in particular, we go beyond recognizing what Christ has accomplished for the universe and consider what He has accomplished for us and how we’re responding to His call. So, we ask ourselves, “What does the power of the cross mean for me today, personally?

Sadly, for many in today’s humanistic and secular world, the meaning of the cross, both personally and corporately, is lost. The secular and humanistic world-view thinks in temporal and material terms (mankind is able to improve and save himself). Without opening themselves up to God, they cannot experience the love of God, let alone His healing, forgiveness, deification. The secular world-view goes something like this: all that I experience in the here and now is the extent of my existence as a material being, so, “eat, drink, for tomorrow, we die” (I Cor. 15:32). In other words, the core of such nihilistic thinking is a selfish, dying focus on self.

Even we as Christians can be affected by the humanism and secularism around us. We may be tempted to pursue the temporary pursuits, ‘comforts,’ and entertainment of the world that are always beckoning us to focus anywhere but on Christ. We may buy into the thinking that the answer to our problems is more money, more financial security; that the answer to our busyness and stress is to focus more on ourselves and our own self-pleasure. Christ God’s words today challenge us to the core: He asks, “What will it profit a man if he gains the whole world, and loses his own soul?

While the world urges us to focus on ourselves, the cross is always a reminder of selflessness and of the greatest of love—Christ’s willing, voluntary gift of Himself, His self-sacrifice for the salvation of the world; it’s the supreme example of God’s love. You and I become truly human, what God has fashioned us to be as God-glorying beings in communion with Him, when we, likewise, come outside ourselves, our own narrow focus, to prioritize and grow in our life in Christ, to give of ourselves, and love like God loves.

For this reason, Christ speaks to us today, admonishing us that “Whoever desires to come after Me, let him deny himself, and take up his cross, and follow Me. For whoever desires to save his life will lose it, but whoever loses his life for My sake and the gospel’s will save it.” It’s in dying to our own selfish wants, ego, and passions that our lives take on real purpose and we are made fit for the Kingdom of Heaven.

Christ knows that if we put self, i.e., ego, first we become what we ‘eat’ –we’re swallowed up by our passions, by the world around us. In contrast, the Christian comes outside himself to love and serve God and in learning to live in the light of His truth, he overcomes the passions, step by struggling step, to become the glorified and adopted children of God He’s created us to be.

The calling to prioritize the life in Christ, to come outside of ourselves to love and to serve and give, to take up our ‘cross’ by denying ourselves the pursuit of what the world runs after, may seem like just such nonsense from a worldly perspective; it runs counter to so much of what the world says we should be about. Indeed, St. Paul reminds us the Sunday prior to the Feast that the message of the cross is foolishness to those who are perishing, even as it is the power of God to those who are being saved (I Cor. 1:18). In other words, what Christ God is sharing with us today is indeed life-saving, because only by following His way are you and I able to follow Christ, find healing from our passions, and become fellow victors with Christ over sin and death.

To the world, self-denial, even true love itself, is alien because in a humanistic and secular world love is seen as something apart from God, Who is the Author of love, and Who, in turn, teaches us how to love. Without Him we can’t truly know love, how to love: “We love Him because He first loved us,” St. John declares in his first Epistle (I Jn. 1:9). And this Love directs us to the cross, the ultimate sign of God’s love and condescension for us, manifested in the Incarnation and in His saving Passion. True love is then both sacrificial and holy because it further unites us with God and with each other as we learn to deny ourselves, take up our cross and follow Christ, not only outwardly in our acts, but inwardly as we’re transformed into ‘little Christs,’ becoming what He is and partaking of the Divine Nature (II Peter 1:4). When Christ stands at the center of our lives, our priorities, He’s at the center of our love too because there stands the cross.

The cross then is the power of God because we see in it Christ’s victory over the greatest obstacle: sin and death. What Christ has assumed, He’s healed, proclaims St. Athanasius. Christ has put on death, but being Life itself, its Creator, He’s won the victory and risen again. That same victory He gives to all who are willing to deny themselves, take up their cross and follow Him. St. John Maximovic writes these meaningful words: “The Cross was sanctified by the Body of Christ which was nailed to it when He gave Himself over to torments and death for the salvation of the world, and it was then filled with life-giving power…The demonic hosts tremble when they see the Cross, for by the Cross the kingdom of hell was destroyed.”

The cross is the power of God because signing ourselves with the cross, we come to ‘own’ Christ’s victory for ourselves: we proclaim Christ’s victory inwardly and outwardly, we guard our hearts and minds in Christ Jesus from the demons and their vices, we learn to “take every thought captive to obey Christ,” we witness to those around us the truth that His victory is for all mankind because all are loved by God and called to holiness and new life through communion with Him. As St. John says, “The Cross then will save from eternal perdition all who conquered temptations by the Cross, who crucified their flesh with its passions and lusts, and took up their cross and followed their Christ.”

Hence the paradox: in order to share in Christ’s victory, we humble ourselves to become not just Christ-like but what Christ is. In order to gain the victory, we die to ego and the world, and to all secular demands that we keep the cross hidden to ourselves. If we put on the cross outwardly and inwardly, we’re equipped to take hold of, to ‘own,’ the new life, the new identity we gain in Christ, growing in courageous humility, with the knowledge of the truth of who we are in Christ. May we proudly, yet humbly proclaim Christ’s victory on the cross and never be ashamed of Christ even as the world around us sees us as fools for not pursuing the same temporal passions.

So, we come back to Christ’s question: “What will it profit a man if he gains the whole world, and loses his own soul?” This world and everything in it is passing away, but those who actively deny themselves, taking up their cross and following Christ will gain the victory, they will transcend this world and become fellow heirs of Christ’s eternal Kingdom. Today, with St. Paul, we’re empowered to reprioritize our lives, to say and live out these words: “I have been crucified with Christ; it is no longer I who live, but Christ lives in me; and the life which I now live in the flesh I live by faith in the Son of God, who loved me and gave Himself for me” (Gal. 2:20).

The Cross reveals God’s mercy and grace
At the very heart of the Gospel is the Cross of the Lord, and this is what Saint Paul is not ashamed of. Thus, whenever we commemorate the Cross, we are reminded of this and of the profound words we hear at every Liturgy after we commune with the Lord: “...for through the Cross, joy has come into the world.”
Comments
×