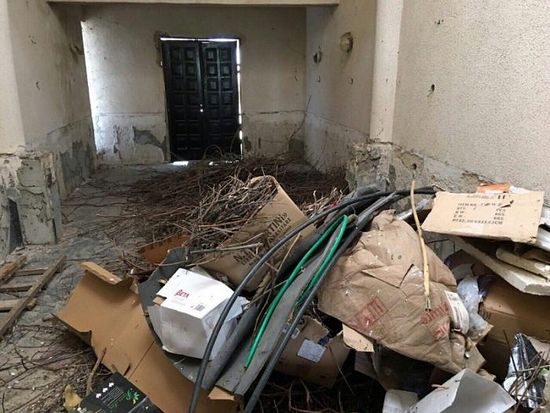 A recently renovated and cleaned cemetery chapel in Pristina was turned into a public restroom and garbage dump, and several Orthodox graves are overgrown with weeds, said the Dioceses of Raska and Prizren.

Such a situation exists despite the fact that a municipal community service is allegedly in charge of taking care of the cemetery and that a paid cemetery guard is provided, says the Diocese.

“During the course of the visit to the Orthodox cemetery in Pristina, priest Sasa Mitrovic encountered a sad and sickening picture. The recently renovated and cleaned cemetery chapel was turned into a public restroom and garbage dump, and several graves are overgrown with weeds,” says the diocese’s statement.

These photographs show a similar situation as in the Temple of Christ the Savior in the city center, where the Diocese of Raska and Prizren has recently decided to clean its temple, to which the municipality of Pristina and sent responded with an inspection (without a warrant) which banned further cleaning of the temple.

“Given that Mitrovdan Memorial ay is near and that numerous believers from Pristina, of which most are not able to live freely in their home town and return to it, will visit their graves. The diocese will have to organize the cleaning of both the cemetery chapel and the cemetery,” says the statement.

The diocese raises the question whether the mayor of Pristina will once again be eager to send an inspection and prevent the cleaning of the temple as he was so far in not undertaking any measures to have Christian Orthodox buildings used as public restrooms.

Bishop Teodosije said that it is painful and difficult that in the “capital city of Kosovo” in the 21st century Christian buildings are used as public restrooms.

“It is a frightening reflection of neglect and lack of basic civilization norms." Mayor of Pristina Shpend Ahmeti recently said in an interview with KiM radio that the municipality is not responsible for checking whether places of worship are desecrated and damaged, so nothing was done during the desecration and arson in the Temple of Christ the Savior.

However, as Ahmeti said, the municipality has responsibility to prevent any kind of work in these facilities (including cleaning and painting). Such abuses of religious freedoms are a disgrace for Kosovo society,” said Teodosije, stressing that no one can prevent the Church from preserving the dignity of its facilities from those who persistently desecrate them. Russian journalists detained in Kosovo while filming footage about Orthodox churches
“The head of the News Front Serbian editorial office, citizen of Russia Oxana Sazonova, as well as freelance cameraman Sergey Belous were detained by Kosovo’s police while filming footage about Orthodox churches located in its territory, as well as about how the Albanians and the Serbs live side by side in the region. The journalists planned to film a documentary about Kosovo,” Knyrik said. “ISIS is coming” graffiti on Serbian Orthodox church wall in Pristina
The graffiti appeared just days before Thursday’s 12th anniversary of the March 17, 2004 pogrom against Kosovo Serbs, when the Pristina church was torched, along with many others.

Anthony10/4/2016 8:36 pm
Albanians are well known for this type of behaviour. Desecrating churches. Urinating in chalices etc. All condoned and supported by the freedom loving west.
×