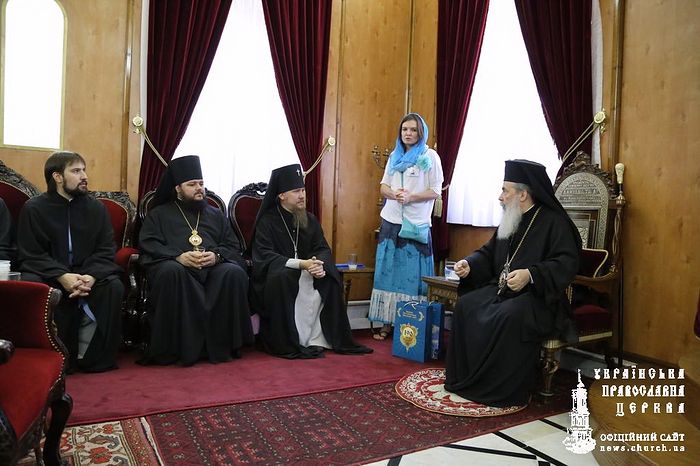 The primate of the Orthodox Church of Jerusalem, His Beatitude Patriarch Theophilos III, supports the faithful members of the canonical Ukrainian Orthodox Church who today are under repeated attacks from the Ukrainian schismatics and nationalists.

All true Christians have always been persecuted in this world, but they have never given way to despair and they consider it an honor to suffer for Christ, the Patriarch of Jerusalem said during a long conversation with a delegation of the UOC-MP headed by Metropolitan Luka of Melitopol and Zaporizhia which had arrived to Jerusalem, reports the Education and Information Department with reference to the UOC-MP’s Pilgrimage Center.

Metropolitan Luka was accompanied by Hieromonk Dometian (Markaryan), head of the Pilgrimage Department at the Russian Ecclesiastical Mission in Jerusalem, and director of the Pilgrimage Center of the Ukrainian Orthodox Church Vladimir Telizhenko. 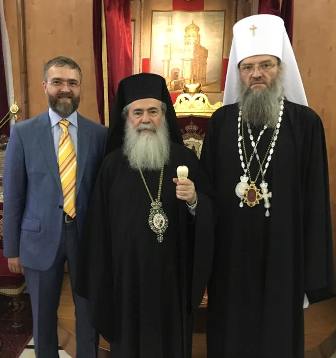 Patriarch Theophilos of Jerusalem and Metropolitan Luka of Melitopol


In the course of the meeting Patriarch Theophilos touched upon the issues of the present relations between the Ukrainian Orthodox Church and the Ukrainian state, and the modern mission of the Church in the secular world along with the martyrdom suffered by Christians of different denominations in the Middle East.

“According to the apostle, we wrestle not against flesh and blood (see Ephesians 6:12),” the patriarch noted. “And one should remember about the source of hatred for Christ and those who love Him, the source of all divisions and conflicts. The Patriarchate of Jerusalem has been striving to promote peace. We need to seek a compromise, to try to find mutual consent and resolution of problems up to the very end. And when it becomes impossible, we must be prepared to bear witness to the love and peace of Christ by our own blood, remaining in the spirit of love and peace. This was the path of all Churches. Thus the Church in Jerusalem was established and She still exists; thus the Russian Church bore witness to the genuine power of Christ in the twentieth century.”

On behalf of the whole Ukrainian Orthodox Church, Metropolitan Luka thanked Patriarch Theophilos for his cordial welcome and the words of support and consolation that His Beatitude passed to the clergy and all the faithful members of the canonical Church in Ukraine.

At the end of the meeting, director of the UOC-MP’s Pilgrimage Center Vladimir Telizhenko discussed with the patriarch details of the ministry of numerous clerics of the UOC-MP who had arrived to the Holy Land in these days.

On the same day Archbishop Elisei of Izyum and Kupyansk, and Bishop Ephraim of Berdyansk and Primorye along with some of the pilgrims from Ukraine met with the primate of the Church of Jerusalem.

The hierarchs of the UOC-MP thanked His Beatitude for their opportunity to venerate the shrines of Palestine and asked for his prayers for the Ukrainian state and people. Welcome Address to President Poroshenko of Ukraine from the Patriarchate of Jerusalem
His Beatitude Patriarch Theophilos of Jerusalem
"The Church of Jerusalem is the Church of the Cross of Christ. We share in both the joys and the sufferings of the Church and our peoples wherever they may be, and we stand ready to make our contribution to the restoration of peace and the building of reconciliation." The Church schism is a bleeding wound on the body of the Ukraine, Holy Synod of UOC MP says
The Holy Synod grieves that the seizure of canonical churches by schismatic bodies are another obstacle to healing the schism.
Comments