Interview for the journal of the Holy Monastery of Samtavro, Mtskheta, Georgia

The following interview was conducted by the nuns of the Samtavro Monastery, for the monastery's journal "Samtavros Makhvlovani," ["The Blackberry Bush of Samtavro"], when Fr. Peter was in Greece as part of a delegation from the Orthodox Church of Greece to the patriarchate of the Georgian Orthodox Church. This is the same monastery where the newly glorified holy ascetic, confessor and fool-for-Christ St. Gabriel lived and reposed and where his relics lay. 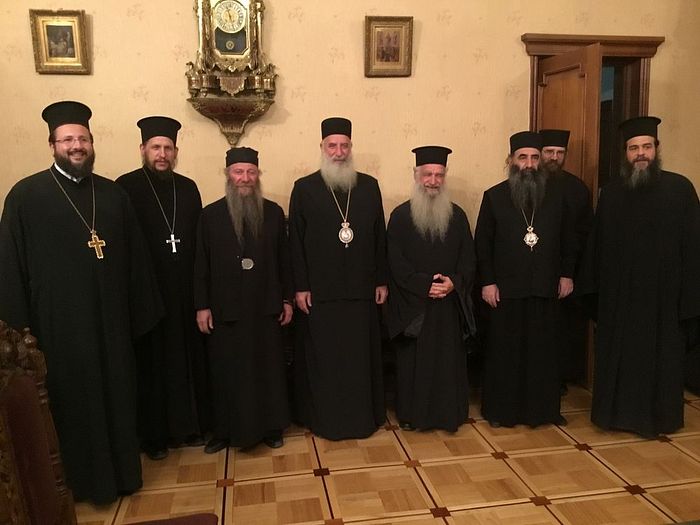 The delegation of theologians from Greece meeting with the hierarchs of the Church of Georgia at the patriarchate to discuss the Council of Crete and the post-council path.

—Please give us your assessment of Cretan Council.

—Sadly, the council in Crete is a false council which produced unorthodox texts which now must be rejected by the Orthodox pleroma.

Christ is the Way and the Truth and on both counts the “Cretan Council” departed from rightly representing Christ. Both in terms of methodology—how it was prepared, organized and conducted—and in terms of essence—the final texts were heavily tainted by the non-Orthodox ecumenist mentality—the “Cretan Council” departed from the way and truth of the holy fathers and Oecumenical Councils. A foreign spirit, alien to the holy fathers but at home in this world, animated the proceedings, proclaiming foreign teachings and not those “strange words, strange doctrines, strange teachings of the Holy Trinity”[1] which have been spoken in the past at every true Oecumenical Council.

In spite of the excessive claims to the contrary, both the preparatory process and the organization and governing rules did not reflect the Orthodox way of conciliarity (συνοδικότητα). Major decisions regarding the council, including the final decision to hold the council, were consistently made without the knowledge, let alone the participation, of the synods of the Local Churches. In practice, then, a new form of Papalism was practiced and promoted, wherein the primates of the Local Churches operated not as “first among equals” but as “first without equals” and as “popes” over their bishops. This was most evident in the unprecedented and unorthodox practice of limiting voting to the primates of the Local Churches. As one bishop noted, without the possibility of voting, the only difference between the Orthodox bishops in attendance and the observers of the various heterodox confessions was that the former [the Orthodox bishops] could speak publicly, even if only for a limited time. 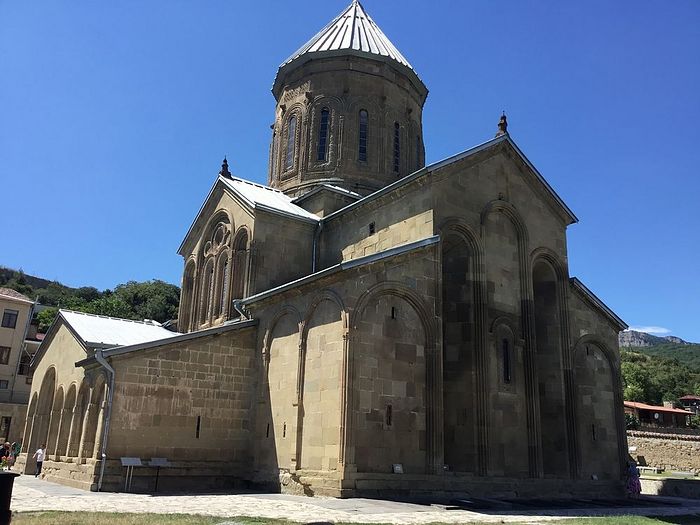 The truth of Christ, that “sign spoken against, “divisive” and revealing of hearts' desires, was also absent or skewed in Crete. The well-known criteria of all Orthodox councils is that they were called to confront doctrinal and, by extension, pastoral challenges to the Church's unity and thus chiefly addressed matters of faith (and thus heresy) and only secondarily related matters of canonical order. In Crete, this relation of faith and order, dogma and ethos, was set aside, with any reference to schism and heresy, let alone living heretics, completely absent. In this most heretical of all ages, in which syncretism and the New Age reigns and the devil “walks naked through history,” the Cretan Council referred even to those well-known heresies condemned by past Oecumenical Councils and the consensus of Church Fathers, as “churches.”

Unfortunately, it is also clear that the council was neither “great” nor “holy.” It was a minor gathering which will be remembered at best as an episcopal conference without pan-Orthodox authority both on account of the small number of bishops invited and the rather secondary issues it addressed. Moreover, however, it was also not “holy” on account of a glaring departure from Holy Tradition and the promotion of syncretistic ecumenism with, among other things, the nonchalant endorsement of unorthodox texts issued in the dialogue with the Papacy (ex. Balamand) and in the so-called “World Council of Churches” (ex. Pussan and Porte Alegre). This tragic departure from Holy Tradition is also apparent in the text approved by the council, “The Sacrament of Marriage and its Impediments,” which directly overturns the 72nd canon of the Penthekte Oecumenical Council (“in Trullo”). In allowing for inter-marriages with the heterodox this document subtly but clearly expresses the so-called “baptismal theology” and the new ecumenist ecclesiology of “partial churches” outside of the One Church. Both it and the document “Relations of the Orthodox Church with the Rest of the Christian World,” which recognizes the existence of “heterodox churches,” are unorthodox texts which must be rejected by the Orthodox Church.

In conclusion, the overwhelming majority of the faithful in Greece were greatly disappointed with the “Cretan Council” and are looking forward to its clear rejection by the hierarchies of the Local Churches which did not attend, first of all which is the venerable Church of Georgia, but also from the Church of Greece's own hierarchy, the pre-council decisions of which were uncanonically set aside by the Archbishop of Greece when he and his retinue accepted the “historical name” of “heterodox churches.”

—What was the resonance of the position of the Georgian Church in Greece?

—The Church of Georgia stands, at this moment in history, as a light unto the faithful everywhere and their hope for the unity of the Church and a future victory of Orthodoxy over the new heretical ecclesiology of syncretistic ecumenism. In particular, the pre-synodical stance of the Holy Synod and His Beatitude, Patriarch Ilia II, with regard to the unorthodox texts on marriage and on the heterodox, as well as the patriarch's epistle sent to the Patriarch of Constantinople during the Council itself, explaining the reasons for not attending, gave great joy to the faithful everywhere and especially in Greece. The faithful in Greece are now looking to the Georgian Church to stay the course and remain strong, standing fearlessly on the firm rock of the confession of faith in the one and only Body of Christ, which is the Orthodox Church, the salvation of the world. We ourselves are engaged in a terrible struggle against anti-Christian forces in our country, which are openly working for the uprooting of the Christian faith from Greece. Syncretistic ecumenism is a part of this ant-Christian agenda. Thus, the witness of the Georgian Church is immensely important.

—What was your impression of meeting with the patriarch of Georgia?

—Our meeting with His Beatitude was the highlight of our visit and a great blessing. His words and graciousness were an encouragement to us in our struggle for the saving faith and against the new ecclesiology of ecumenism. It was clear to us that the patriarch and hierarchy are committed to Orthodox unity and will not be swayed to entertain any of the divisive innovations introduced in Crete. His Beatitude showed us that he understands that only on the basis of the Orthodox confession of faith in the one Church and the rejection of the new ecclesiology can “the unity of the faith and the communion of the Holy Spirit” be built and remain steadfast. His Beatitude assured us that for the Church of Georgia “there are not many churches, but only one Church, the Orthodox Church,” and that he and the Holy Synod will “work for the unity of all the Orthodox,” which can only be assured on the basis of the faith once delivered.

We will be forever grateful to His Beatitude Ilia II, the reverend metropolitans and pious clergy and faithful of the Church of Georgia for the exceptional hospitality and loving kindess they showed to us during our visit. It is our prayer that our short visit will be the beginning of a close and fruitful cooperation between the faithful of Georgia and Greece on the all-important matters of the faith which binds us together in Christ and His Church. May it be blessed! 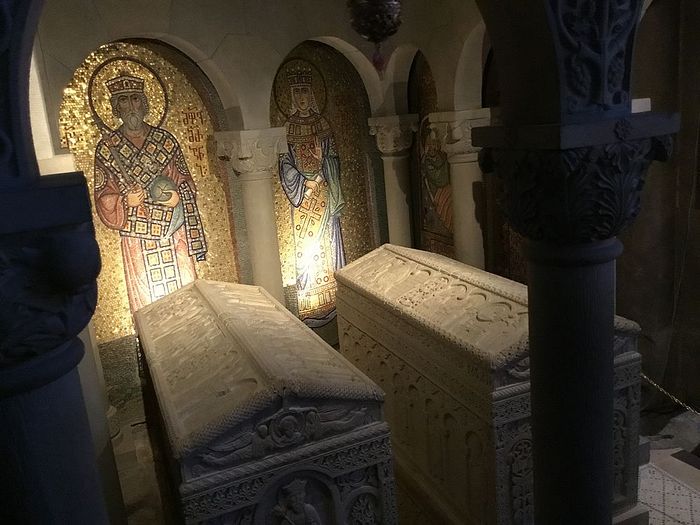 The tombs of revered kings and queens of Georgia in the catholicon of the Holy Samtavro Monastery, Mtskheta, Georgia

Fr. Peter Heers is the rector of the parish of the Prophet Elias, Petrokerasa, Greece, Diocese of Ierissou and Agion Oros (Orthodox Church of Greece)

He is the author of The Missionary Origins of Modern Ecumenism: Milestones Leading up to 1920, as well as The Ecclesiological Renovation of the Second Vatican Council: An Orthodox Examination of Rome’s Ecumenical Theology Regarding Baptism and the Church.

Fr. Peter is also the translator of several books, including the Life of Elder Paisios and the Epistles of Elder Paisios, The Truth of our Faith (vols 1 & 2) by Elder Cleopa and Apostle to Zaire: The Life and Legacy of Blessed Cosmas of Grigoriou, as well as the best-selling children’s book From I-ville to You-ville.

[1] From the Praises of Orthros of the Feast of Pentecost With Love for Truth
On Patriarch-Catholicos Ilia II and the visit of Pope Francis to Georgia
Jesse Dominick
As a wise and discerning shepherd, Patriarch-Catholicos Ilia II maintained a balance between respect for his guest and respect for his own flock and Church, and his own ordination, with all its ensuing responsibilities, stating: “True faith, humbleness and our traditions—these are the ancient treasures that we preserve and will continue to do so in future. We greet you again and confess that our unity is in the true faith. Only true faith and love will open the path towards our communion.” VIDEO: Georgian Orthodox Church rejects document on ecumenism drafted for the Great Council, 2016.
Following the session of the Holy Synod of the Georgian Apostolic Orthodox Church held on February 16, 2016, His Holiness Ilia II, Patriarch and Catholicos of Tbilisi and All Georgia announced that the Synod has rejected the document "The relation of the Orthodox Church towards the rest of the Christian world" which was prepared for the upcoming Pan-Orthodox Council to be held in Crete in June 2016.
Comments

Anthony10/8/2016 11:40 am
Thank you Fr Peter. An absolutely brilliant, succinct erudite summation of why this heretical council must be rejected. The Church is in such desperate need of people like Fr Peter to bring us Truth when our own hierarchs are dragging us into an abyss with their heretical ecumenism. Of course the Church has always suffered being battered by enemies from within - in the former times it was the valiant minority - saints like Athanasios the Great and Mark of Ephesus who defended the purity of Dogma. Nowadays we have men like Father Peter doing the same thing. God bless him and all those who defend our Church.
×