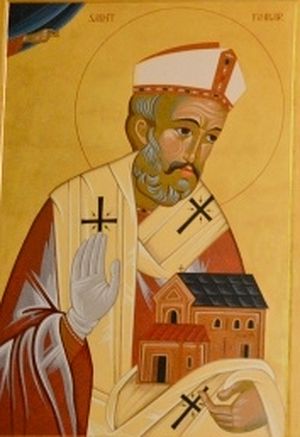 St. Finbarr (also spelled Findbarr, Barra, Barr, Barry) was  descended from a clan in the south-western Irish kingdom (now province) of Connacht, which is also spelled Connaught, in the mid-sixth century. In all probability his birthplace was at Lisnacaheragh in what is now county Cork in the south of Ireland. His father was a metalworker and his mother was a royal slave. The name “Finbarr” means “a white head” because he was born fair-haired. This name was given him when he was tonsured, but his original baptismal name was Lochan.

Young Finbarr may have studied at a monastery in Kilkenny and also at Macroom – a town in the present-day county Cork. St. Finbarr with several companions made at least two pilgrimages to Rome and also visited Wales where he communicated with St. David of Mynyw, the patron-saint of that country.

St. Finbarr preached energetically in the south of Ireland and, according to some traditions, also in Scotland, though there is no written evidence to confirm that. The saint of God spent a part of his life as an anchorite in full seclusion on an island in lake Gougane Barra in county Cork. With time the holy ascetic was joined by numerous disciples, mainly from southern Ireland, and St. Finbarr founded a monastery and a school near his hermitage at Gougane Barra, both of which became very famous and attracted a large number of monks and students from the southern part of the emerald island. The saint also erected at least several churches in the neighboring area and one chapel at Kilbarry – a site associated with his family. 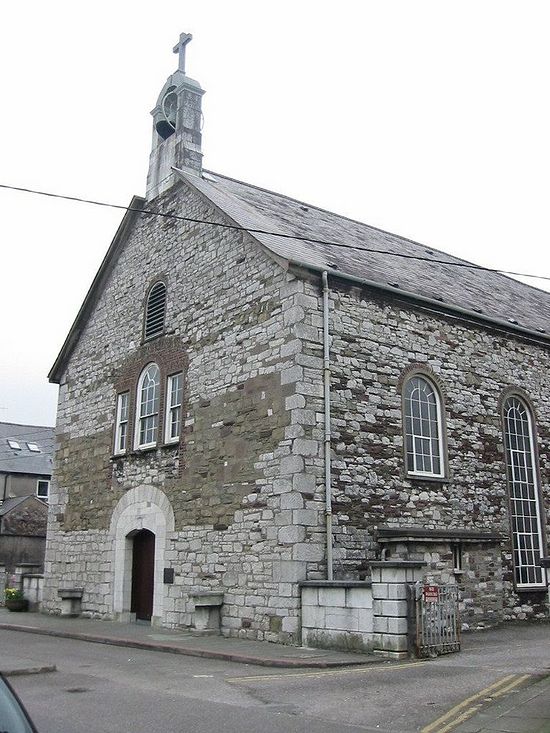 But the man of God’s main achievement was the foundation on the river Lee of his most important and influential monastery, on the site called Cork, which in the tenth century would become a thriving town. Now it is a very beautiful city in the south of Ireland. In effect the city of Cork grew and developed around the saint’s monastery. Thus, Finbarr, the first Abbot of Cork, was one of many early saints of the British Isles and Ireland who contributed to formation of future large settlements with their churches or monasteries at the center of the community.

About the year 600, St. Finbarr was consecrated the first bishop of Cork. The celebrated Monastery of Cork became a center of monasticism in southern Ireland, and many pious men gathered there from all over Ireland in order to be trained in monastic life and to live in holiness. St. Finbarr gained general love and respect as a brilliant and experienced teacher and a loving father of his flock. At the school-seminary that was founded at Cork Monastery, spiritual and secular sciences were taught and students prepared for priesthood. This place became known as a center of learning, a seedbed of saints, a sanctuary of Christian virtues, a refuge for the oppressed, a shelter for the sick and the poor. St. Finbarr did not stop his activities as a builder – he erected no fewer than twelve more churches in the Cork region during his ministry there. He preached the Gospel tirelessly throughout his life, and as a bishop he trained and ordained many deacons, presbyters, bishops. He baptized many people, and became known as a great wonderworker. Fintan often visited the monasteries and churches he had founded as part of his pastoral care, especially Gougane Barra – his most favorite creation – where he sometimes withdrew for quiet prayer.

The later Latin and Irish versions of his Life praise many virtues of this saint, calling him a torch of wisdom, an orchard full of apples of sweetness, comparing him with St. David the Psalmist, St. Paul the lover of truth, St. John (the Baptist) the pure ascetic, and so on. Among successors and spiritual heirs of St. Finbarr were at least seventeen saints and hundreds of pious monks. His biographers wrote that St. Finbarr was often guided by an angel. He lived for some time as an anchorite in a cave, healed many sick people, had visions of the spiritual world, possessed the gift of prophecy, and even predicted the day of his death. 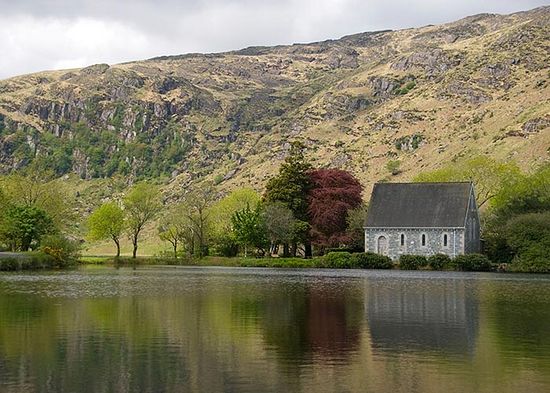 The holy hierarch reposed peacefully in the place called Cell na Cluaine (according to another version – at Cloyne), where he had earlier built a church, on his way back from a journey to Gougane Barra. The exact year of his death is unknown: various sources give the years 610, 623 and 633. According to a legend, the sun did not set for two weeks in Ireland after the death of such a beloved saint! St. Finbarr was buried at Cork.

The Anglican cathedral (Church of Ireland) built in the early French style in the city of Cork is dedicated to St. Finbarr. It dates from the nineteenth century – a work of the architect William Burges (1827-1881) – and stands on the site of the monastery of St. Finbarr, who from time immemorial has been venerated as the heavenly patron of the city of Cork and the diocese with the same name. One Catholic parish church in the city of Cork, commonly referred to as “the south church,” is dedicated to St. Finbarr. This is the oldest Catholic church in the city; the present building dates from 1766 and stands on the site of an earlier church. The temple is richly adorned inside and has a famous figure of Christ in the chancel along with a fine statue of the saint. The Roman Catholic cathedral of Cork is dedicated to Sts. Mary and Anne and it commemorates the city’s patron-saint as well. Cork also has a cemetery and a hospital, both of which are named after St. Finbarr. It is really moving that the motto of University College Cork (a constituent university of National University of Ireland) reads: “Where Finbarr taught let Munster[1] learn”. 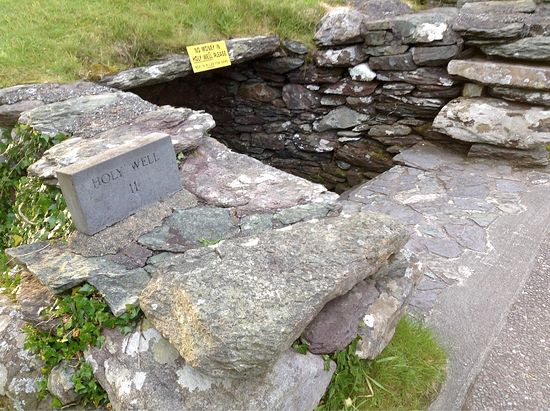 For many centuries the deep veneration of St. Finbarr has continued at Gougane Barra (now the island has a causeway) where ancient monastic ruins still survive and pilgrimages are regularly arranged by the Orthodox and Catholics. Today it is still a very isolated and idyllic site surrounded by picturesque landscapes, and many travelers consider it to be one of the most beautiful spots in Ireland. It has the nineteenth-century Chapel (called oratory) of St. Finbarr with beautiful stained glass windows, eight circular prayer cells (formerly used by Catholic penitents), a holy well in honor of the saint, and the monastic ruins. The holy well with healing properties may have appeared here due to the prayers of St. Finbarr himself. There also used to stand an early cross nearby which is associated with the saint. Many legends are connected with this holy site—according to one of them, St. Finbarr banished forever a terrible dragon (that is, a demon), which had dwelt in Gougane Barra Lake. 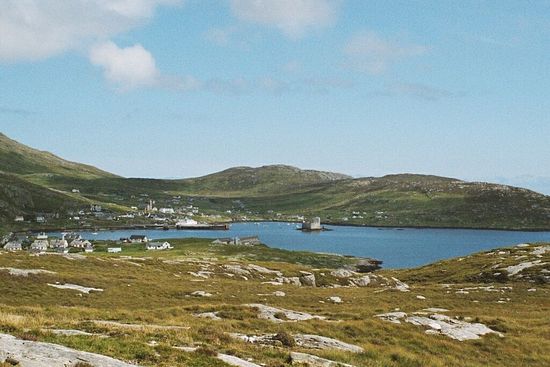 Indeed St. Finbarr is one of the greatest and most beloved early saints of southern Ireland.

Outside Ireland St. Finbarr is venerated in Scotland. Although it is impossible to assert that the saint visited Scotland in his life, he has been continuously venerated there, especially on the isle of Barra, which belongs to the Inner Hebrides; ruins of an ancient church dedicated to him can still be seen there. The great ascetic of God is also venerated in the Scottish regions of Sutherland and Caithness along with another site, called Dornoch. A number of place-names of Scotland bear the name of St. Finbarr, which indicates that students and monks of Cork Monastery visited these areas in ancient times and brought the veneration of their patron to the Scottish soil.

St. Finbarr is venerated in England as well. There is a tradition that links him to the small town of Fowey in Cornwall, where this saint supposedly built a church late in the sixth century. The town’s fourteenth-century parish church is dedicated to St. Finbarr. A very early piece of folklore claims that in the first century A.D., St. Joseph of Arimathea, who was a merchant by trade, landed at Fowey in south Cornwall (a county with a rich tin mining history) together with the Infant Christ. There are several other places in Cornwall and Somerset whose ancient local traditions relate similar stories and claim that the Savior was physically present there. 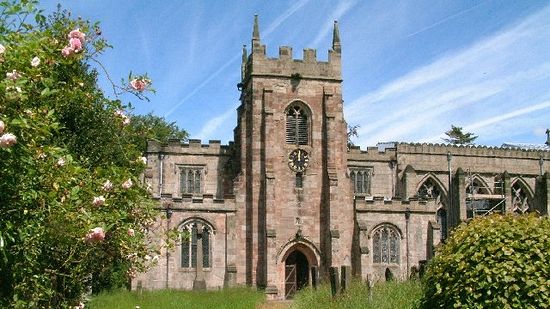 Church of Sts. Mary and Barlock in Norbury, Derbyshire.

In the English county Derbyshire there is a village called Norbury where the local medieval parish church is dedicated to St. Mary and St. Barlock. The present church is the third structure on the site – the first one was Saxon. St. Barlock (also Barlok) is identified by scholars with St. Finbarr who is also depicted on one of numerous beautiful stained glass windows of this church. The church was built in the twelfth century by Lord John Fitzherbert, who earlier had been a governor of Waterford in Ireland – hence the dedication to an Irish saint. This village is also closely connected with the family of Mary Ann Evans (1819-1880), widely known under her pseudonym George Eliot – a prominent Victorian-era novelist.

A number of schools in Ireland, England and even Australia are named after our saint. Catholic parish churches are dedicated to St. Finbarr even far away from Ireland – namely in Brooklin, New York, and in Naples (Florida, the USA), along with several parishes in Australia.

St. Finbarr is venerated by many as the heavenly protector of immigrants.

Holy Hierarch Finbarr of Cork, pray to God for us!

[1] Munster is a province and former kingdom in the southwest of Ireland in which Cork along with a few other Irish counties are situated. Now Cork is the second largest town in the Irish Republic – and it is indebted for its existence to St. Finbarr! A Gift of Hospitality—Saint Brigid, Abbess of Kildare
Commemorated February 1/14
Mary Dugan Doss
The life of Saint Brigid of Ireland offers us new insight into the virtue of hospitality, the cheerful, generous giving of food and shelter. We know that this virtue is praised throughout the Scriptures. The hospitality of Abraham to three young men who visited him was revealed to be offered to none other than the three Persons of the Holy Trinity. In fact, it is in the forms of these three young visitors that the Holy Trinity is most often represented in iconography. Our Lord Jesus Christ commanded us to offer hospitality when He said: Saint Fursey of Ireland
Commemorated: January 16/29
Dmitry Lapa
Fursey spent most of his life in his native Ireland where he founded the famous Rathmat Monastery, probably in County Clare, which became a celebrated center of Irish monasticism. Fiona Hamilton-Little9/25/2019 7:04 pm
What a beautiful life to have lived, no wonder he is so beloved. I am glad to share part of his name!