The Immoral Policy of the United States Government in Syria 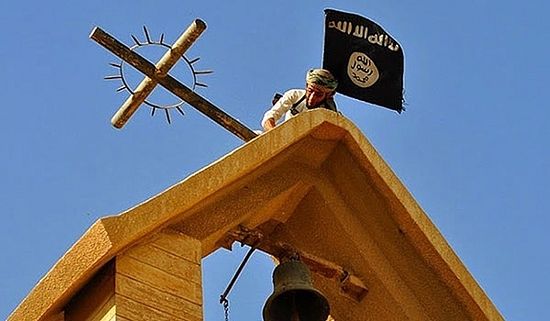 I feel compelled, as a Christian and as an American citizen speaking only for myself, to condemn the policy of the United States government which has been to overthrow the Syrian government by arming and funding a radical jihadist insurgency. This has fueled and exacerbated a conflict which has witnessed the deaths of nearly half of a million Syrians, produced five million refugees, seven and a half-million internally displaced people, and has brought untold misery upon many millions more who have suffered either directly or indirectly as a result of this shameful policy. [1]

I cannot turn a blind eye to the fact that our government continues, with our tax-payer dollars, to fund and arm those who are raping, murdering, and displacing Christians (who represent about ten percent of the overall population) and other religious minorities in Syria. [2]

Our government waged a phony bombing campaign against ISIS for more than a year, with the only effect being that it made it appear that we were doing something, and provided cover for what we have clearly been up to. In fact, the end result of our government’s actions was to allow these terrorists to push further west into Syria. Our government willfully "looked the other way" because it put added pressure on the legitimate Syrian government (a United Nations member). [3] Some of the foremost academic experts in the world have repeatedly confirmed this. [4] To the extent that ISIS has been “on the run” in recent months, this is primarily due to the efforts of the Syrian Army and their allies, and not to the half-hearted actions of our government.

ISIS soon overran much of Iraq and Eastern Syria, often traveling in large convoys across open desert (which would have been easy targets for a serious bombing campaign by the world’s most powerful air force), and eventually captured historic Palmyra in Syria. This has resulted not only in the immense immediate loss of human life, and the destruction of countless communities – but also the loss of priceless artifacts and documents that are lost to future generations, forever. Ancient Christian communities, many that spoke the very language of Christ, and have existed since the time of the apostles have been destroyed. [5] We have seen the revival of slave markets, which have functioned openly in the streets of cities in Syria and Iraq. And our government has not only done very little to put a stop to these things, but has in fact funneled arms and supplies to groups closely allied with the al-Nusra Front (which is a branch of Al Qaeda, lately calling itself Jabhat Fatah al-Sham) and ISIS. [6] Our own government has also continued to demonize other world powers, who at the invitation of the Syrian government, are assisting in the fight against ISIS and other terrorist groups. Our leaders continue to keep this civil war going, instead of pursuing legitimate avenues of peace, while continuing to remain closely allied with sources of terrorist ideology like Saudi Arabia. [7]

Lest anyone think that what I am saying reflects conspiracy theories or fringe views, I would note that no less than Franklin Graham, who does charitable work on the ground in Syria, and is the son of the famous evangelist Billy Graham, has been pointing out these errors in US policy in Syria for years. Like most of those who know the Christians of Syria, he opposes any attempt to overthrow the Syrian government, because this government has protected Christians and other religious minorities, and any government that would likely replace it, would see the end of Christianity in Syria. [8]

We should all call upon our leaders to stop this reckless and inhuman policy, and especially condemn any suggestion that we should bomb the Syrian Army. It is unfortunate that many civilians have suffered and died in this civil war, but the primary responsibility for that belongs to those who set this war in motion, fueled it with a steady supply of arms and supplies, and have consistently prevented efforts to bring it to a swift conclusion. [9]

We should also immediately cut off all military and financial aid to “rebel” groups, which is what fueled the rapid rise of ISIS in the first place. [10] We should end the sanctions that helped create the turmoil that laid the groundwork for this civil war. And furthermore, the US government should provide sufficient resources to rebuild the communities that have been destroyed as a result these immoral and unjust actions. We should also all continue to pray daily for the peace of Syria and for the victims of this tragic and foolish war.

[3] In fact, Vice President Biden, speaking at Harvard University on October 2, 2014, admitted that our regional allies (Turkey, Saudi Arabia, and Qatar) created, armed, and funded ISIS and the other terrorist groups because they hoped to overthrow the Syrian government:https://youtu.be/dcKVCtg5dxM?t=53m20s

[6] Kevin Boyd (September, 2014). Remember Those 'Moderate' Syrian Rebels That The U.S. Armed? ISIS Got Some Of Those Weapons Too. Independent Journal Review. Retrieved October 6, 2016, from http://ijr.com/2014/09/175685-remember-moderate-rebels-syria-obama-armed-isis-got-weapons/ 120,000 People Starving in Syrian City Besieged by ISIS
"The few products that are still found – tomatoes, canned sardines, some tea – are sold on the black market with prices more than tenfold.” Syrian archbishop criticises US for ‘siding with al-Qaeda’

Syrian archbishop criticises US for ‘siding with al-Qaeda’
Archbishop Jacques Behnan Hindo has said the CIA has been training Syrian rebel groups which are 'al-Qaeda under a different name'. Syrian nun and human rights activist believes that the USA is the creator of Islamist terrorism
Mother Agnes stated that she felt that the aim of western powers is to “shatter the human memory, to form a colorless society without history and values, in the Middle East. It is evident that one word ‘from across the ocean’ is enough to declare the Syrian government ‘illegitimate’ and to wage a full-scale war against us, against ordinary people.”
Comments

Castrese Tipaldi1/15/2017 2:38 pm
I have always been amazed by the boundless charity of father John Witheford. I remember him losing much time and strenght in debates, trying to heal mental cases who think Calvinism to be Christianity.
Now I see him even taking seriosly a certain JJ, who thinks that a Christian faithful should stay silent about people causing half a million deaths and unspeakable suffering in Syria (plus millions others in a dozen countries more before that, just in the last 25 years), just to do the bid (their lusts) of their father, the murderer since the beginning and the father of lies, and of their father using the means: MURDER and LIES!

The Lord declared that upon the generation who rejected Him would be the blood of all the innocents shed on the earth, since Abel to Zecharias.
I humbly pray to Him that, in His good pleasure, all this innocent blood of today may be only upon those who have spilled it, ordered it to be spilled or worked in any way to help it to be spilled, sparing the despicable mass of those who have been silent, being afraid, weak or cheated, while it was spilled.
Upon those who lie knowing to be lying, those who know the truth and lie, the blaspemers of the Holy Spirit, He has already spoken His judgement: they will not be forgiven, neither in this age nor in the age to come.

JJ10/25/2016 11:52 pm
Fr. John Whiteford:
"JJ, if you read the Bible, you will find similar things discussed by the prophets on a regular basis. A policy that has resulted in so much death and misery is not just a matter of politics."

Yes, the prophets did pronounce (not discuss) the judgment of God against unrighteousness and injustice in the OT, in particular in Israel, - they were the anointed mouthpieces of God.

gerald ralph carbonneau10/14/2016 1:48 am
Thank you Father John for this excellent article. It needs much wider distribution.

Gregory Drobny10/11/2016 6:20 pm
Fantastic article, Fr. John. We need more voices such as yours speaking out against our reckless foreign policy.

Benjamin Chung10/11/2016 7:27 am
It is the duty of every citizen to defend the rights of every other citizen and also the rights of innocent people around the world...by offering asylum and refugee status to those who are unjustly persecuted....this Obama regime has done an extremely poor job at that....regularly overlooking the plight of persecuted christians in the mid-east by inciting rebels to commit crimes against humanity(providing dangerous arms to known murderers..) I feel that the way both domestic and foreign policy in the USA is going....especially the momentum of corruption which has taken place for over 3 decades now in steady manner is due to meet a judgement from the Almighty...these kinds of behaviors and actions on the part of the regime in Washington are unacceptable to christian law abiding citizens who stand for Constitutional Rights and the rights of christians around the world...the USA must stop providing material weapons to rebels in Syria and Iraq. AND the US must stop ISIS and any other group from threatening the rights of christians in that region of the world...if not by military means...than at least be diplomacy at the UN and by granting refugee status immigration rights to every christian in the nations of Syria and Iraq who have cause and reason to flee their war torn land!!!

Fr. John Whiteford10/11/2016 4:19 am
JJ, if you read the Bible, you will find similar things discussed by the prophets on a regular basis. A policy that has resulted in so much death and misery is not just a matter of politics.

Tyler10/10/2016 9:17 pm
I am glad that Pravoslavie has the courage to run this article. Remeber who funded Bin Laden back in the cold war? The USA. They war against Christian nations in the name of "rainbow" immorality and terror. They speak of rebels and terrorists as "freedom fighters". They have done this since the days of "muhjadeen" in Afganistan.

May St. Vladimer intercede for Holy Rus in their campaign in Syria.

Many secular people do not even know that the middle east was a christian region before islam conquered the area. At that time most of europe was covered by Slavic, Celtic, or Norse paganism and would remain so for several centuries. Europe and Russia were given the Light of the Gospel by missionaries from the Africa, Syria, Armenia, Greece, etc.

Anthony10/10/2016 8:51 pm
''It is unfortunate that many civilians have suffered and died in this civil war, but the primary responsibility for that belongs to those who set this war in motion, fueled it with a steady supply of arms and supplies, and have consistently prevented efforts to bring it to a swift conclusion''

i.e the Amerikan government owned and operated by the powerful jewish lobby owned and operated by israel. That's who's behind all of this. Why have ISIS never attacked israel? Yet israel have been involved in bombing Syrian army targets. Because israel wants to create chaos with Muslims fighting each other, whilst they expand and create greater israel out of what's left of Palestinian territory. RT's Crosstalk has very good assessments of what's really going on. And it's not what the western media lie to you.

It's time to wake up completely, father.
Your government (rectius, the people who own your "government"), have designed, organized, trained and funded nearly every jihadist force since the beginning, nearly everywhere, and it's the dark background and source of every major (not only islamic) terrorist attack in the US and the West, faked ones included.

The only correct name for the current Western civilization is DEMONOCRACY!
Pure, resident evil at work.
×