Prostrations at the Liturgy 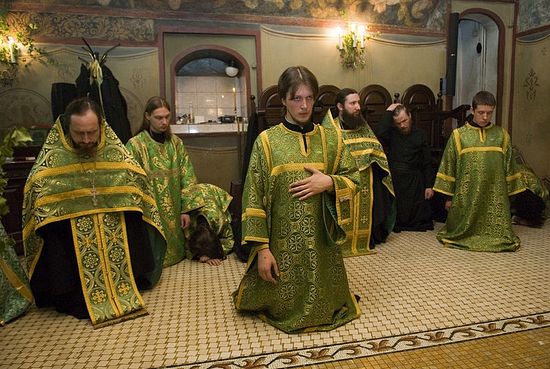 We do not make prostrations at all on Sundays, with the exception being the veneration of the Cross on the third Sunday of Lent, or when the feasts of the Exaltation of the Holy Cross or the Procession of the Cross fall on a Sunday.

We also do not make prostrations on feasts of the Lord (except for the veneration of Cross), regardless of what day they fall on.

We do make them on great feasts of the Theotokos, unless they fall on a Sunday.

During the Church Year, we stop making prostrations after the Presanctified Liturgy on Holy Wednesday, with the only exception being the veneration of the Epitaphios (Plashchanitsa in Slavonic, meaning the Burial Shroud of the Lord) at Holy Friday Vespers, and Holy Saturday Matins. Even though the Epitaphios remains out until just before Paschal Matins (in Russian practice), prostrations are not supposed to be done when venerating it after the Matins of Holy Saturday (which is actually served Friday evening). We do not make prostrations again until the Kneeling Vespers of Pentecost.

Keeping the above in mind, at Liturgies that do not fall on Sundays or Feasts of the Lord, there are five points at which prostrations should be made:

1. At the Anaphora, the priest or bishop says, “Let us give thanks unto the Lord.”

2. At the end of the hymn: “We praise Thee, we bless Thee, we give thanks unto Thee, O Lord; and we pray unto Thee, O our God.” For those in the Altar who are able to hear it, this should be done when the priest or bishop says, “Changing them by Thy Holy Spirit.” That prayer is traditionally said in a low voice, while the hymn is being sung, and so the people usually do not hear it said.

3. At the end of the hymn to the Theotokos at the Anaphora: “It is truly meet,” or its substitute (Zadostoinik—the irmos of the ninth ode in the canon to the feast).

4. When the chalice is brought out by the deacon or priest, and he says, “With the fear of God and with faith, draw nigh.” The clergy do not prostrate at this time, because they do this earlier in the Altar, before they commune.

It is also a common practice in some local traditions to make a prostration when we sing the “Our Father.” However, according to Archbishop Peter, St. John of Shanghai taught that this was incorrect, because, as we say just before we sing this prayer at the Liturgy, we are asking that God would enable us “with boldness and without condemnation to dare to call upon [him] the heavenly God as Father...” And a son does not prostrate himself before his father, when he has such boldness and is not under condemnation.

At my parish in Riga, the custom is to kneel even on Sundays when the chalice is brought out, listening in that position to the prayer recited by the priest and finally making a prostration when it is over.

I am aware that the canons forbid to kneel and prostrate on Sunday, so that at the beginning I did not follow them, but then I've decided it was better to stop being the only one standing in that moment, to avoid temptations (I judging them or they judging me).
Therefore, I do the same now; after all, it's hard to reproach someone because he's bowing down to the Lord, even if made on the Day of Resurrection.

Anyway, I wonder if it's the correct behaviour. What should someone do in such a circumstance?

Joseph Cervantes10/19/2016 12:03 am
It is my understanding that the Sign of the Cross is made first and after it is completed, one then makes the bow either to the ground or to the waist. This also holds true for the veneration of icons. For some reason, some people reverse the order and bow first and then make the Sign of the Cross as they are arising. I wonder how this custom of bowing first was started. It seems to me the making of the Sign of the Cross first and then bowing makes more sense. For instance, if we are reciting the Jesus Prayer, it makes more sense to cross ourselves as we say "Lord Jesus Christ," and to fall down at "have mercy on me."

wendy10/18/2016 9:04 pm
Thank you for this article. I wished there were more online courses that taught about the church services.
×