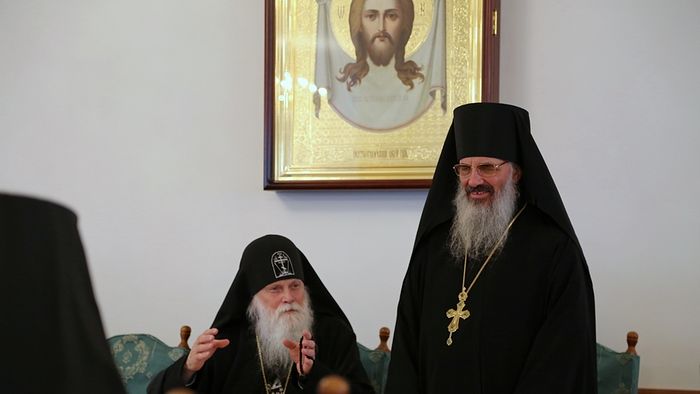 The outstanding Swiss theologian and patrologist Schema-Archimandrite Gabriel (Bunge) has met with the brethren of the Dormition Kiev Caves Lavra. The meeting took place on October 18 as part of Archimandrite Gabriel’s pilgrimage to the Holy places of Ukraine, reports Lavra.ua.

The distinguished guest was introduced by Archimandrite Amvrosy (Makar), rector of the Church of St. Ambrose of Milan in the Italian city of Milan. The priest told the brethren about the life of Schema-Archimandrite Gabriel, his thirty-six years of ascetic life in the mountains of Switzerland and that today he is abbot of the Monastery of the Exaltation of the Cross in Lugano (southern Switzerland), and author of a number of books on monasticism, and pastor to many spiritual children.

The talk began with questions on Fr. Gabriel’s life in the mountains. The schema-archimandrite related how he got acquainted with the Orthodox tradition and Orthodox monasticism.

“My first contact with Orthodoxy was in 1961 in Greece. By that time I had already joined a Benedictine monastery and nearly half our brethren followed the Eastern liturgical tradition. That monastery wanted to become a bridge between the East and the West. I studied a great deal and read the writings of the holy fathers. With the blessing of my confessor I became a hermit in the ‘80s and I still live in a skete which is located 900 meters (c. 2952.76 feet) above sea level. I tried to imitate the fathers of olden times in my life. I wrote and published books to inspire Western people—all of us need to return to our roots. From the very beginning I realized that the West was separated from the East. Even many hierarchs of the Roman Catholic Church referred to the teachings of the fathers of the Eastern Church, but, nevertheless, the Roman Church went its own way,” said Schema-Archimandrite Gabriel.

Answering the question on the prospects of the reunification of the Eastern and Western Churches, Fr. Gabriel emphasized that “there is no theological sense in the dialogue with the Roman Catholic Church. Catholics must return back to the Church. My teacher and professor who later became Pope Benedict XVI understood many things but did nothing. The Orthodox Church has preserved the Liturgy and the monastic tradition, while the Roman Catholic Church is currently moving towards Protestantism rather than returning to Orthodoxy. The real problem of this division is not in the differences—it is in the incompatibility. The Greek and Roman cultures in the first millennium were different yet compatible with each other.”

The theologian also drew the brethren’s attention to the vital topic of the place of monasticism in the modern world: “Modern people want monks to answer their spiritual questions, not national and political ones. Monks are separated from this world and they live their own lives which are different from the life in the world. Such life enables them to gain wisdom which is not of this world—and this is precisely what people are waiting for. Many come to me too and expect me to answer their questions. And I have to tell them what they need to do and what not to do.”

Speaking on whether modern monasticism should take the anchoretic or cenobitic path, Schema-Archimandrite Gabriel explained: “Monasticism began not with the cenobitic tradition. The first monks were anchorites, but they always had a teacher. Both paths are good. It all depends on the calling from God in each case. The Church has a place for everybody! And the Lord saves us not individually, but all together!”

At the end of the meeting assistant abbot of the Kiev Caves Lavra Archimandrite Anthony thanked Fr. Gabriel for his visit and for answering the topical questions and conveyed to him greetings from the monastery’s abbot, Metropolitan Paul. After that a general picture was taken to remember the meeting.

Theological Study, the Spiritual Life, and Russia Today: A Conversation with Fr. Gabriel (Bunge)
The following conversation with Schema-Archimandrite Gabriel (Bunge), the renowned patristics scholar from the Skete of the Holy Cross in Switzerland, was held during his visit to Moscow in early November 2012
Comments