Icon of the Mother of God of Yakhrom 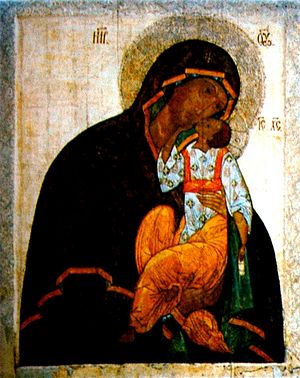 The Yakhrom Icon of the Mother of God appeared to the holy youth Cosmas (February 18), while he was accompanying his master, a sick landowner. Cosmas had stopped at the bank of the Yakhrom River, not far from Vladimir, and the sick man fell asleep. Cosmas suddenly saw a bright light coming from a nearby tree, and heard a voice, “Attend and understand the words of life. Live a God-pleasing life and seek the joy of the righteous, and then you will delight in eternal blessings.” The light had come from an icon of the Dormition of the Most Holy Theotokos.

St Cosmas (February 18) took the icon and placed it on his master, who was immediately healed. After this, Cosmas’s term of servitude expired, so he went to the Kiev Caves monastery. After he was tonsured, he amazed even the experienced monks by his own spiritual efforts.

Years later, St Cosmas was told by an angel to return to the place where he had found the icon. He took the wonderworking icon with him to the bank of the Yakhrom River where he had found the icon. At once, the place was again filled with light. St Cosmas built a monastery in honor of the Dormition of the Mother of God, and placed the Yakhrom Icon within it.