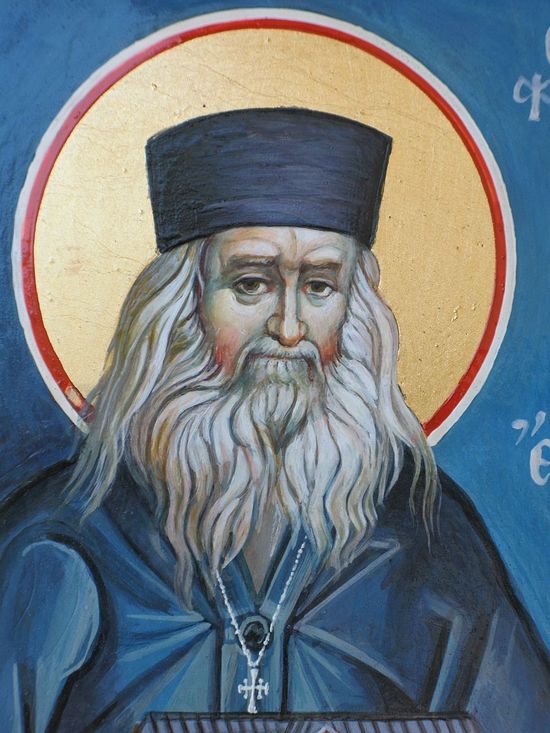 A conference in honor of the eminent twentieth century monk and theologian Archimandrite Sophrony (Sakharov) was held in Moscow on October 25, 2016.

The conference, “The Spiritual Heritage of Archimandrite Sophrony (Sakharov) and Its Importance in the Modern World,” held at Moscow’s Alexander Solzhenitsyn House of Russian Émigrés, gathered an international body of presenters and audience to reflect upon the elder’s contributions to and influence on Orthodox life in twentieth century.

The symposium was organized and directed by Ksenia Borisovna Yermishina, PhD, senior research fellow at the House of Russian Émigrés, and opened with the reading of a greeting and blessing from His Eminence Metropolitan Hilarion (Alfeyev), who recalled his own unforgettable meetings with Archimandrite Sophrony. 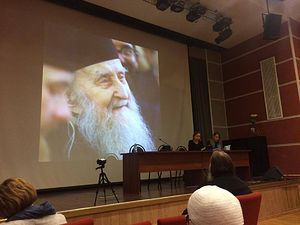 Yermishina noted that the conference was timed to coincide with several important celebrations: 1000 years of Russian monasticism on Mt. Athos, where Archimandrite Sophrony lived for twenty-two years, 300 years of Russian Orthodoxy in England, where Elder Sophrony founded his monastery in 1959 and lived until his 1993 repose, 150 years since the birth of his Athonite spiritual father St. Silouan, and 120 years since the birth of the elder himself.

The conference was organized over the course of several months since Lent, with the help of artist Anna Kunetsova, and aimed to “draw attention to the theme of Russian Athos and the spiritual heritage of the Athonites St. Silouan and Archimandrite Sophrony.” Noting that the Ecumenical Patriarchate announced this year that it was preparing materials for the glorification of Elder Sophrony, Yermishina stated that the conference also hoped to hasten the day of his glorification, and clear up misconceptions about him often found in the Russian Church.

“Archimandirte Sophrony is very well known on Athos, in Greece, in England, and in Europe, but little known in Russia. We wanted to show that the elder’s heritage is in demand in his homeland, and that creative intellectuals create in the spirit of Elder Sophrony’s teachings. We showed that his inspired disciples include authors, artists, sculptors, iconographers, directors, composers, and so on,” said Yermishina.

Elder Sophrony’s enduring influence as a monastic of great spiritual heights, a theologian, and an artist was explored throughout the day, focusing on questions of creativity in the Church, inspiration, and the spiritual life. 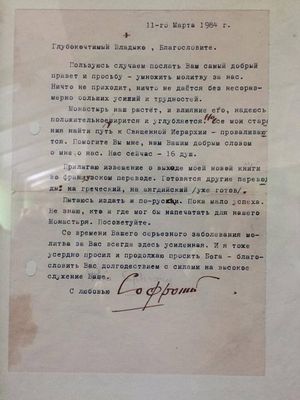 The day also included fragments from the film “Letter to Russia” of director A. Alekseev and producer N. O. Rodomanova, a presentation of Nun Gavriela's book Seeking Perfection in the World of Art: The Artistic Path of Fr. Sophrony, and an exhibition of art and personal items of Fr. Sophrony, including letters he wrote to Archbishop Basil Krivoshein.

“I believe it was a unique conference, as we were able to move away from the formal framework of just boring papers,” Yermishina said, noting especially V. Ivchenko’s reading of St. Silouan’s “Adam’s Lament,” set to Arvo Part’s composition of the same title. Although many Russians came to faith through the elder’s book “Elder Silouan,” there seemed to be indifference in organizing and attending a conference in honor of Elder Sophrony, but the organizer promised that this conference will be only the beginning.