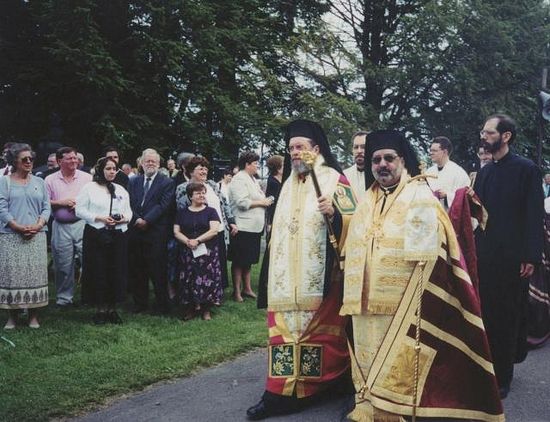 On Wednesday, October 26, a press conference was held outside the St. Nicholas Antiochian Orthodox Cathedral in Los Angeles, reports pokrov.org . The topic was unpleasant, but one which has many in the diocese deeply concerned—clergy and laity alike.

In a letter dated October 6, His Eminence Metropolitan Joseph of the Antiochian Orthodox Christian Archdiocese of North America announced the appointment of Bishop Demetri as vicar bishop of the Diocese of the West, saying “I would like and expect you to welcome His Grace Bishop DEMETRI to your parishes and to treat him as though I myself was visiting you.”

The concern arises from Bishop Demetri Matta Khoury’s February 25, 2004 conviction for attempted fourth degree criminal sexual misconduct. He was arrested July 9, 2003 after appearing plain-clothed and visibly intoxicated in a Michigan casino where he grabbed a woman’s breast. He stated that he didn’t remember the night, but plead guilty after viewing the casino’s security footage.

He was sentenced to twenty-eight days in jail with two years of probation, and required to register as a sex offender, although his conviction and classification were both later revoked after he appealed in 2014.

Bishop Demetri was granted retirement following his conviction, but while still a registered sex offender was appointed as auxiliary bishop for the Antiochian Archdiocese of Mexico, though the Synod again retired him in 2009 due to public outcry.

Given this history, many are concerned about personal safety, and struggling to understand this move on the part of Met. Joseph, what message the diocese is sending about sexual abuse, and how to best proceed in this difficult situation.

Linda Abraham Beckley11/10/2016 1:08 am
Hopefully Bishop Demetri has received counseling and help for his problems! That being said, he should not be alone with anyone.

Jon Roehrig11/8/2016 7:00 pm
Bishop Demetri should be stripped of his title and excommunicated until he repents before an assembly of Bishops and when he does this she should still remain in humility and be a simple monk living in a skete. This is not harsh punishment but it is right, no one should be sexually offended by clergy and there needs to be tougher action on such cases and if Patriarchs turn a blind eye to such horrific accounts of sexual abuse then the Patriarchs title should be in question for dethronement.

John Carter11/2/2016 8:25 pm
Regardless of whether this man has repented, his drunken and abusive behavior *proved on casino video* demonstrates a character flaw. The continued attempts to cover this up demonstrate an inability to discern threat to the flock on the part of our leaders. If Demetri had humility, he would recuse himself.

Michael Karcher10/30/2016 7:34 pm
Mr. Panagiotu, . ., Maybe this so-called bishop should have been deposed upon his conviction in 2004, and himself should have demanded it, if he was truly repentant. Perhaps forgives requires penance first on the part of the sinner...

Yet this is the kind of politics as usual that will lead many of the faithful away from the Archdiocese. PHILIP must be rolling in his grave in Ligonier at this outrage...

Ross S. Heckmann10/30/2016 8:56 am
I am unaware of what, if any, monitoring has been done, so it is impossible to say at this time whether this is a one time incident. I have no evidence that there have been any other incidents. However, those who commit sex crimes seldom do so on only one occasion in their whole lives. If he has repented, we must forgive. But he can never, ever, ever, be trusted again. Let him find a place of service that does not expose women to risk of violation, that does not further expose him to temptations that might overwhelm him once more, and that brings shame, dishonor, and scandal to the church and to the community. The bishop is supposed to represent Christ. Can't we do better than a sex offender?

This is not about "forgiveness." Forgiveness and reinstating the man as a BISHOP are two completely different things.

"Repentance is good. No one has suggested that he should not be forgiven. This is a red herring. His actions warranted his deposition. He has violated enough canons to have been removed and he was removed. He is not only an alcoholic, he is also a registered sex offender. There is no legitimate way for him to be reinstated as a diocesan bishop."

Anna10/30/2016 1:09 am
It is very unusual for this kind of thing to be one time...
We do forgive, yes, or we will not be forgiven,
but past behavior like this breaks the trust of the laety and clergy alike.

Our Bishops and all clergy should be without reproach with no drunken scandal in their past. May God have mercy on us all!

Anthony10/29/2016 1:57 pm
Tragically I think most Orthodox jurisdictions in the land of new Babylon better known as the USA with the exception of ROCOR are corrupt to the core. There was the recent article on Pravoslavie about the Greek jurisdiction giving an award to an abortionist US legislator with a photo of their Archbishop Demetrios and said legislator. Then look at the OCAs own actions with regards to allowing the defrocked troublesome former ROCOR deacon Ron Haler (who uses the stage name "Lazar Puhalo") into their jurisdiction as a "retired bishop" despite his pro homosexual transsexual views. And look at Bob Arida another OCA priest who communes "married men". Of course the Church has always suffered from wolves in her midst. Way back since the days of Arius. God however has promised they will not prevail

Mrs. B10/28/2016 8:03 pm
Jesus gives us the example to forgive AND forget. This was years ago, he was drunk and there have been no repeat offenses. Where is our forgiveness toward him? A one time incident such as this should not brand a person for life. Paul killed Christians and later went on to write 3/4 of the New Testament. Noah was a drunk, Abraham was a coward who pimped his wife out twice. There are plenty of biblical examples of men gone wrong who ended the race well. Let's not put ourselves above God and say who can, or cannot, end their race well.
×