St. John of Kronstadt Through the Eyes of New Martyr Alexander Hotovitzky

According to research by the Society for Orthodox History in the Americas, St. John of Kronstadt was often written about in the American press during his lifetime. Although people in the United States generally had little knowledge of Orthodox Christianity, the people were Christian, and information about a living saint who so tirelessly cared for the poor, healed the sick, and even raised the dead caught the sincere interest of the reading public.

Living and serving in the United States from 1895 to 1914 was another saint of the Russian Orthodox Church, New Martyr Alexander Hotovitzky. St. Alexander came to America from Volhynia, now the western part of the Ukraine, serving first in Alaska as a lay missionary and later as a priest in the St. Nicholas Cathedral in New York. This thriving parish is still part of the Moscow Patriarchate, and has a direct link to St. John of Kronstadt—St. John helped finance its construction.

In 1903, Fr. Alexander traveled to Russia and visited Fr. John Sergiev, the future saint, in Kronstadt. When he returned to New York, he gave an interview to a reporter from the Wilkes-Barre Times, and spoke about the famous wonder-worker of Kronstadt. The article was printed in that periodical on April 7, 1904. 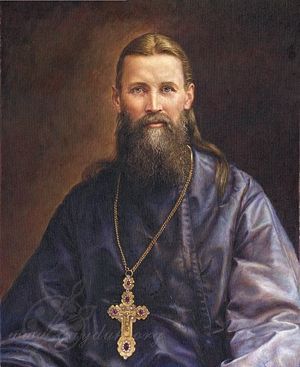 St. John of Kronstadt
In the study of Rev. Alexander A. Hotovitzky, Archpriest of the church of St. Nicholas, the chief adornment is a large picture of Father John bearing his autograph. This was presented to Father Hotovitzky last Summer when, during a visit to Russia, he called upon Father John to thank him for the interest he had taken in his little flock. A portion of the funds necessary for the erection of the handsome new church edifice was collected in Russia, and Father John both by personal donations and by enlisting the interest of others in the cause became a substantial contributor.

The visit of Father Hotovitzky to Cronstadt [sic] occurred on July 19 (old style). It so happened that this was Father John’s name day. Faithful to a custom of many years, the Russian divine on that day celebrated a solemn mass in the cathedral and then entertained at dinner the many friends who had come to extend their good wishes. The Rev. Father Hotovitzky was one of the guests.

“Vice Admiral Marakoff was toast-master at the dinner,” said Father Hotovitzky yesterday. “It was only natural that he should be, for he and Father John are bound together by ties of warm personal friendship. There were present at that dinner many dignitaries of Church and State, but, nevertheless, it was a most democratic affair. Father John has some quaint notions, and even in a land of such marked class distinction as Russia, rich terms of equality. It was a good dinner, and good things to drink went with it, for Father John, though ordinarily he lives as frugally and abstemiously as a monk, believes that God put the good things of life on earth for the cheer of man, and he loves to see others enjoy themselves.

“Father John in some respects is the most remarkable man in Russia to-day, and certainly is the most talked of. He represents a type all by itself in the Russian Church, and no one has so vividly brought home to the people its power and potentialities with a complete leaving out of all the ostentation, pomp, and grandeur with which it formerly charmed and awed the people.

“Those who have been wont to consider Father John as a mystic or as a man of a monastic cast of mind have erred. He is the opposite. He took a wife, and he mingles freely in the common life of the people, and he enjoys a good joke. He has secularized religion and both by life and teaching has steadily striven to lift the common life to the level of religion. He is a strong advocate of the living help, and he turned his back on monastic orders just because he felt he was needed and could be a potent influence for good by remaining in the open life where those that needed him could constantly besiege the doors of his simple dwelling in Cronstadt when he is there and the crowds that gather at railroad stations during his many journeys through Russia which occupy the greater part of his time have shown that he was right. 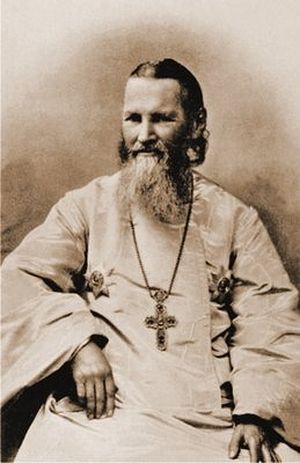 St. John of Kronstadt. Photo: http://www.pravenc.ru/
“His influence reaches from the throne of the Czar to the meanest hovel in Russia. He takes from the abundance of the rich with both hands and scatters it as freely among those that need it. It is only through the remarkable gifts he receives that he has been able to maintain something like twenty-five asylums and institutions in different parts of Russia, of which he is the founder.

“One charm about Father John is his broadness. While orthodox in the essential meaning of that word, he makes no distinction between those that follow his and other beliefs. He bestows his blessing on all alike, for he recognizes as divine every channel through which a devout spirit and a realization of the highest life can flow into the human soul.

“In his study you will find a desk, a bed and some holy pictures. It is as simple as the cell of a monk. He spends little time there, however, for his time is mostly taken up with relieving suffering among the poor, comforting the dying, and on missionary journeys. Were a call to attend a deathbed at the other end of the empire to reach Father John in the middle of the night he would rise and take the first train.

“There are many in Russia who ascribe supernatural powers to Father John. He does not claim any, except the power of prayer. He is a firm believer in that, and the most remarkable thing is that his prayers are very brief. But one cannot look into his wondrous violet eyes without feeling that the look in them is not of this world. They seem to be looking, one minute far beyond the border line of life, and at other times they seem to penetrate into one’s very soul. Strangely, also, those who have observed him during the last twenty-five years of his life – he is now over seventy – declare that age seems to have wrought no change in his appearance.”

Holy Righteous Father John of Kronstadt and New Martyr Alexander, pray to God for us!