Jesus Christ, The Word of God, and Scriptures 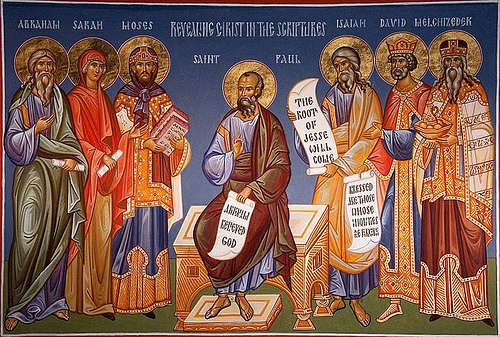 The Evangelist John, known in the Orthodox Church as John the Theologian, proclaimed Jesus to be the incarnate Word of God. John is very clear WHO the Word of God is: Jesus Christ, the incarnate Son of God to whom the Scriptures bore witness.

You search the scriptures, because you think that in them you have eternal life; and it is they that bear witness to me… (John 5:39)

Thus the written revelation of God, the Scriptures bear witness to the Word of God. As Jesus teaches, Moses inspired by God to write the Torah, was actually writing about the Word of God who was to become incarnate.

If you believed Moses, you would believe me, for he wrote of me.(John 5:46)

And beginning with Moses and all the prophets, he interpreted to them in all the scriptures the things concerning himself. (Luke 24:27)

Not only Moses but all the prophets and all the authors of Scripture were inspired to write about the coming Messiah, the Word of God.

Then he said to them, ‘These are my words which I spoke to you, while I was still with you, that everything written about me in the law of Moses and the prophets and the psalms must be fulfilled.’ Then he opened their minds to understand the scriptures… (Luke 24:44-45)

Even when we think about the Word of God as being a written text, which we call the Bible, we have to realize the Bible is a collection of books written over hundreds of years by different authors. Some of the books show signs that there were several different authors/editors involved in bringing together the texts of a book. The Church still considers the texts inspired—whether one author or several had a hand in writing the book, or whether a book was edited by several different people, or even if we don’t know who the author(s) of a book are, we still consider the Scriptures to be inspired by God. Absolute certainty about the authorship of a text, or total knowledge of the history of a book of the Bible, does not determine its inspiration.   Even when the books of the bible show several different versions of the same story, sometimes placed side by side within one book of the Bible, the Church accepts the received texts and all its variations as being inspired. The Church in history accepted as inspired the Septuagint translation into Greek of the ancient Hebrew and Aramaic texts, as well as the original texts from which they were translated.

The first thing I will mention about our Bible, and the books accepted by the Church as being part of our Scriptures, is that not only was the Bible written over many centuries, but the bringing together of all the texts and deciding which texts exactly belong to the canonical Scriptures also took centuries. We see in the historical documents clear evidence that inspired saints, the Fathers of the Church did have at times slightly different ideas about which books constituted the official scriptures of the Church. Additionally, there is a great deal of literature which compares and contrasts even the differences in the official texts of the Bible in the various Christian traditions (Latin, Greek, Syriac, Ethiopian, Coptic, etc) . Here I will only mention a few quotes that gives us a sense some of the differences in the Church Fathers through the centuries about what is officially in the bible. In the 2nd Century we find one attempt at establishing what books belong in the Bible (the fact that this has to be established shows us that there was not exact agreement on what books officially belong in the canonical Bible).

Melito (d. ca 180ad) visited the Holy Land with a view to establishing the list of the canonical books of the Old Testament. According to Eusebius (EH 4.26) (d. 339AD), his list does not contain the book of Esther, which incidentally is also missing from the biblical remains of the Dead Sea Scrolls found at Qumran   (Geza Vermes, Christian Beginnings, Kindle Loc. 3424-26).

Melitio’s Bible agrees with the Qumran community’s “canon”. That community was a dissident group of Jews outside of mainstream Judaism in Jerusalem.

A 4th Century Document, The Apostolic Constitutions (written ca 375AD), says this about the Canon: “Let the following books be esteemed venerable and holy by you, both of the clergy and laity. Of the Old Covenant: the five books of Moses— Genesis, Exodus, Leviticus, Numbers, and Deuteronomy; one of Joshua the son of Nun, one of the Judges, one of Ruth, four of the Kings, two of the Chronicles, two of Ezra, one of Esther, one of Judith, three of the Maccabees, one of Job, one hundred and fifty psalms; three books of Solomon— Proverbs, Ecclesiastes, and the Song of Songs; sixteen prophets. And besides these, take care that your young persons learn the Wisdom of the very learned Sirach. But our sacred books, that is, those of the New Covenant, are these: the four Gospels of Matthew, Mark, Luke, and John; the fourteen Epistles of Paul; two Epistles of Peter, three of John, one of James, one of Jude; two Epistles of Clement; and the Constitutions dedicated to you the bishops by me Clement, in eight books; which it is not fit to publish before all, because of the mysteries contained in them; and the Acts of us the Apostles.” (The Apostolic Constitutions, Kindle Loc. 4894-4900)

That 4th century canon of Scripture has many more books than officially ended up in the Bible of today. It gives us a sense that there was not one canon accepted by all Christians in the 4th Century. In the 8th Century, St. John of Damascus (d. 749) wrote a book that many consider authoritative in the Orthodox world for delineating doctrine.   Note in his comments especially what he considers to be the canonical books of the New Testament. He is writing 400 years after many think the Christian canon had been closed. St. John says:

St. John includes in the Bible as he knows it the letters of Clement but also those canons of the Holy Apostles mentioned from the 4th Century. He includes as Scripture even more than the 4th Century Apostolic Constitution did.

Finally, in the 12th Century St Peter of Damaskos (Damascus) says this of the Canon of Scripture which he accepted:

These books include first of all the Old and the New Testaments, that is, the Pentateuch, the Psalter, the Four Books of Kings, the Six Books of Wisdom, the Prophets, the Chronicles, the Acts of the Apostles, the Holy Gospels and the commentaries on all these… (St. Peter of Damaskos—12th Century, THE PHILOKALIA, Kindle Loc. 25654-56).

St. Peter seems almost to have an open canon of Scripture for he includes all of the commentaries (supposedly the Patristic ones) on the Scriptures. The issue of Canon had to do with what writings people believe bore witness to Jesus Christ, the incarnate Word of God. The Scriptures are those writing which bear witness to Christ, and so in different centuries they had differing ideas about what bore authentic witness to the Word of God. All of these lists would have the common theme that the Scriptures—whatever books are included in the Bible—bear witness to the truth and help us recognize Jesus Christ as Lord. Interpreting the Scriptures
Fr. Ted Bobosh
The Fathers of the Church recognize that the written Scriptures require interpretation. The written texts occasionally are self- evident in their meaning and can be read at face value, but often they contain within them the prophecies and revelations of God hidden in familiar images, events, and in the language of the text. Nathan K.T.12/6/2019 5:03 am
http://shkolnikstudio.com/bio.html This is the link to the artist of the painting Revealing Christ in the Scriptures. Hope this helps.

Nicholas Jones12/4/2019 8:24 pm
Hello Father, Yes we are looking for the same information as Michael. IE: Information on the Painting. THank you kindly. God Bless

Michael Ferris12/3/2019 6:31 am
Doing a bible study and trying to find the name of the artist for "Revealing Christ in the Scriptures" (at opening of this article) and the "story" behind the painting. Thank you.
×