Literalism: The Word of God vs. the Scriptures

Previous post in the series: Jesus Christ, The Word of God, and Scriptures

So I went to the angel and told him to give me the little scroll; and he said to me, “Take it and eat; it will be bitter to your stomach, but sweet as honey in your mouth.” And I took the little scroll from the hand of the angel and ate it; it was sweet as honey in my mouth, but when I had eaten it my stomach was made bitter.  (Revelation 10:9-10) 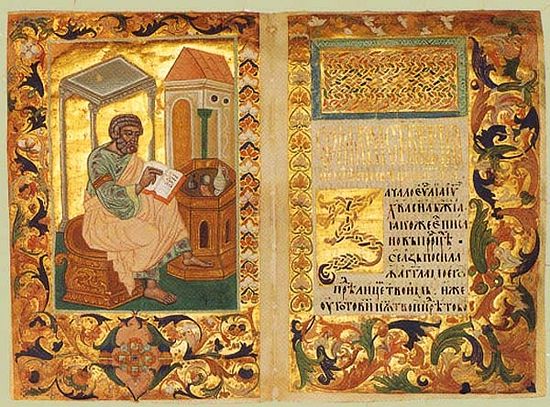 Though in the Bible in a few narratives a saint is commanded to literally eat the scroll on which words are written, we have no problem understanding these commands as having a metaphorical or spiritual meaning. Indeed, we know that the Bible is for reading, and it will do us little spiritual good to tear out and eat the pages of our bibles. The Word of God which we encounter in the text of our Bibles, has to be lifted from the text in our minds and souls for us to appropriate the Word and for that Word to become written on our hearts. This cannot be accomplished by literally chewing and swallowing the paper pages of our Bibles. Literally eating the pages of the Bible would no doubt lead to John’s stomachache which he describes in the Revelation passage above.

We experience in our spiritual life the need to distinguish the Word of God from the manuscripts upon which they are written with ink. We do consume the Word, but in a spiritual manner, exactly as the Church Fathers taught. We experience in our lives how the Word of God who is Jesus Christ is different from the Bible as the written Word of God. “…God, who also made us sufficient as ministers of the new covenant, not of the letter but of the Spirit; for the letter kills, but the Spirit gives life” (2 Corinthians 3:5-6). Christ manifests himself now beyond the text printed in the manuscripts. We encounter Christ also both hidden and revealed in the sacraments, in the liturgies and in the Church which is His body.   The Scriptures bear witness to Christ, but Christ is not limited to their words and pages. We must get beyond the literal word to come to the Word of God. God’s revelation is fully there, hidden in the text, and the text is essential for our encounter with Christ, and yet as we encounter the incarnate Word of God, we move beyond the printed text not just to the virtual reality of Christ, but to The Word of God Himself.

Not only in Scripture but the hand of God is always at work in history, in nature, in the laws of physics, in our DNA. God “writes” His Word in so many ways that become visible to us, and readable to us if we have the eyes to see. In them we can encounter God, but we have to move beyond them to truly see God and not just be aware of God’s activities.

But by the law and the prophets did the Word preach both Himself and the Father alike [to all]; and all the people heard Him alike, but all did not alike believe.   (St. Irenaeus of Lyons,  Against Heresies and Fragments, Kindle Loc. 5380-81)

The pre-incarnate Jesus Christ spoke to the prophets and to the people of God. The Old Testament scriptures use the very words of the pre-incarnate Christ to bear witness that Jesus Christ is Lord. We use the Scriptures as a door into the reality of the Word of God. Just like an icon is a window into heaven, so too the texts of Scripture are a door by which we pass into the heavenly realms. The Bible is an interface between God and creation, so it is essential to our knowing Truth. Yet the ink and paper cannot contain or limit God. Rather we have to move beyond them to know the living Word.

In Scripture the Logos of God is called and actually is dew (cf. Deut. 32:2), water, spring (cf. John 4:14) and river (cf. John 7:38), according to the subjective capacity of the recipient. To some He is dew because He quenches the burning energy of the passions which assails the body from without. To those seared in the depths of their being by the poison of evil He is water, not only because water through antipathy destroys its opposite but also because it bestows a vivifying power conducive to well-being. To those in whom the fountain of contemplative experience is continually active He is a spring bestowing wisdom. To those from whom flows the true teaching about salvation, He is a river copiously watering men, domestic animals, wild beasts and plants.”       (St. Maximos, The Philokalia, Kindle Loc. 15358-65)

In the words of Scripture – not only through the ink and paper which record the message but also in the very metaphors, parables, images and events – we come to God the Word living in the texts. Only in moving beyond the literal words can we enter into that relationship with God.

God is found by us not only in the printed word but in and through the meaning of these printed manuscripts. God has hidden Himself in the text, but in that encounter with the text, the pure in heart do come to the Giver of the Law, the Speaker of the words, to God our Father and Creator. God is mystically present in the Scriptures but our full encounter with Him takes us beyond the limits of the text, of the manuscripts, of the paper, and even beyond the metaphors and meaning of those sacred words.

“It is by means of the more lofty conceptual images that the inner principle of Holy Scripture can be stripped gradually of the complex garment of words with which it is physically draped. Then to the visionary intellect – the intellect which through the total abandonment of its natural activities is able to attain a glimpse of the simplicity that in some measure discloses this principle – it reveals itself as though in the sound of a delicate breeze.”   (St Maximos the Confessor, The Philokalia, Kindle Loc. 15433-42)

It turns out that the printed text of the Scriptures are like garments, which cover us. Those garments can be beautiful. They can say something about us. But they also clothe us and hide us. They are not literally us. That is what we discover in the spiritual reading of the Scriptures. We move beyond the clothes, the coverings, and we come to the One who made the garments, to the one who is the Giver of every good and perfect gift. God.

Without natural contemplation no one can appreciate the disparity between the symbols through which the Law is expressed and the divine realities which these symbols represent. Further, if through such contemplation a man has not first discerned this disparity and, denying his sense-perception all access to the hidden realm of divine and intelligible realities, does not long to penetrate with his intellect into its beauty, he cannot be liberated completely from the external diversity to be found in the symbols. So long as he cleaves to the letter, his inner hunger for spiritual knowledge will not be satisfied; for he has condemned himself like the wily serpent to feed on the earth – that is, on the outward or literal form – of Scripture (cf. Gen. 3:14), and does not, as a true disciple of Christ, feed on heaven – that is, on the spirit and soul of Scripture, in other words, on celestial and angelic bread. I mean that he does not feed through Christ on the spiritual contemplation and knowledge of the Scriptures, which God gives unstintingly to those who love Him, in accordance with the text: ‘He gave them the bread of heaven; man ate the food of angels’(Ps. 78:24-25. LXX).”   (St. Maximos the Confessor, THE PHILOKALIA, Kindle Loc. 19610-36)

The beauty of the garments which clothe the Word are wonderful. The gifts given by the Creator are life-giving. Yet, we are able to move beyond those wonders and beyond that beauty to the Giver of the Gifts, to the One who is clothed with the garments of salvation.

“When our intellect has shaken off its many opinions about created things, then the inner principle of truth appears clearly to it, providing it with a foundation of real knowledge and removing its former preconceptions as though removing scales from the eyes, as happened in the case of St Paul (cf. Acts 9:18). For an understanding of Scripture that does not go beyond the literal meaning, and a view of the sensible world that relies exclusively on sense-perception, are indeed scales, blinding the soul’s visionary faculty and preventing access to the pure Logos of truth.”   (St. Maximos, The Philokalia, Kindle Loc. 15451-56)