Venerable Matrona the Abbess of Constantinople 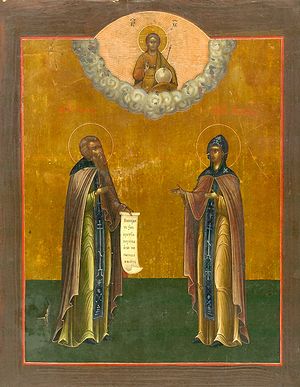 Saint Matrona, Abbess of Constantinople was born in the city of Perge Pamphylia (Asia Minor) in the fifth century. They gave her in marriage to a wealthy man named Dometian. When her daughter Theodota was born, they resettled in Constantinople. The twenty-five-year-old Matrona loved to walk to the temple of God. She spent entire days there, ardently praying to the Lord and weeping for her sins.

At the church the saint met two pious Eldresses, Eugenia and Susanna, who from their youth lived there in asceticism, work and prayer. Matrona began to imitate the God-pleasing life of an ascetic, humbling her flesh by abstinence and fasting, for which she had to endure criticism by her husband.

Her soul yearned for a full renunciation of the world. After long hesitation, St Matrona decided to leave her family and entreated the Lord to reveal whether her intent was pleasing to Him. The Lord heard the prayer of His servant. Once, during a light sleep, she had a dream that she had fled from her husband, who was in pursuit of her. The saint concealed herself in a crowd of monks approaching her, and her husband did not notice her. Matrona accepted this dream as a divine directive to enter a men’s monastery, where her husband would not think to look for her.

She gave her fifteen-year-old daughter to be raised by the Eldress Susanna, and having cut her own hair and disguised herself in men’s attire, she went to the monastery of St Bassion (October 10). There the Nun Matrona passed herself off as the eunuch Babylos and was accepted as one of the brethren. Apprehensive lest the monks learn that she was a woman, the saint passed her time in constant quietude and much work. The brethren marveled at the great virtue of Babylos.

One time the saint was working in the monastery vineyard with the other monks. The novice monk Barnabas noted that her ear-lobe was pierced and asked about it. “It is necessary, brother, to till the soil and not watch other people, which is not proper for a monk,” answered the saint.

With tears the saint told the igumen about all her past life, about her husband, hostile to her efforts and prayers, and about the vision directing her to go to the men’s monastery. Convinced that her intent was pure and chaste, St Bassion sent St Matrona to a women’s monastery in the city of Emesa. In this monastery the saint dwelt for many years, inspiring the sisters by her high monastic achievement. When the Abbess died, by the unanimous wish of the nuns the Nun Matrona became head of the convent.

The fame of her virtuous activities, and miraculous gift of healing, which she acquired from the Lord, spread far beyond the walls of the monastery. Dometian also heard about the deeds of the nun. When St Matrona learned that her husband was coming to the monastery and wanted to see her, she secretly went off to Jerusalem, and then to Mount Sinai, and from there to Beirut, where she settled in an abandoned pagan temple. The local inhabitants learned of her seclusion, and began to come to her. The holy ascetic turned many from their pagan impiety and converted them to Christ.

Women and girls began to settle by the dwelling of the nun and soon a new monastery was formed. Having fulfilled the will of God, revealed to her in a dream, the saint left Beirut and journeyed to Constantinople where she learned that her husband had died. With the blessing of her spiritual Father, St Bassion, the ascetic founded a women’s monastery in Constantinople, to which sisters from the Beirut convent she founded also transferred. The Constantinople monastery of St Matrona was known for its strict monastic rule and the virtuous life of its sisters.

In extreme old age St Matrona had a vision of the heavenly Paradise and the place prepared for her there after 75 years of monastic labor. At the age of one hundred, St Matrona blessed the sisters,and quietly fell asleep in the Lord.

The image of God was truly preserved in you, O Mother, / for you took up the Cross and followed Christ. / By so doing, you taught us to disregard the flesh, for it passes away; / but to care instead for the soul, since it is immortal. / Therefore your spirit, O holy Mother Matróna, rejoices with the angels.

You passed through the storm of life without faltering, chosen and godly Mother Matróna, / guided to the harbor of life, where you sing hymns to the Deliverer. / You ever pray that Christ may grant us grace and mercy; / you preserve the flock which you painstakingly gathered!