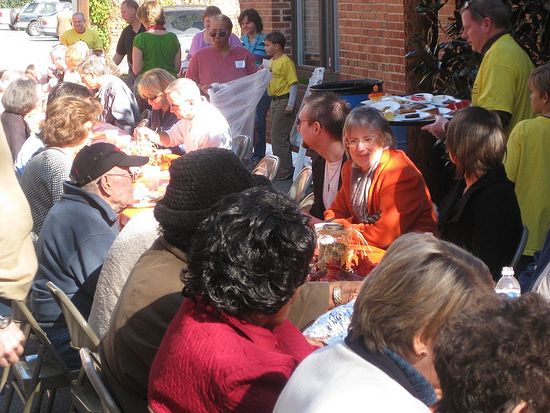 Whom should I thank?

The question is normally a matter of polite acknowledgement. A gift was given and received. Who gave it? Whom should I thank?

It is inherently the nature of giving thanks that thanks must be given to someone. I cannot give thanks to nothing or no one. As such, the giving of thanks is an act of communion on one level or another.

The prominent place of thanksgiving within the life of the Old Testament seems strangely obscured by most Christian treatments. The system of sacrifice is often misunderstood. The offering of bulls and goats is easily interpreted as a system of payments to an angry God. Our sins have created a debt and deserved guilt. What is owed to God must be paid. But this very treatment of sacrifice is condemned within the Old Testament itself.

I know all the birds of the mountains, And the wild beasts of the field are Mine. If I were hungry, I would not tell you; For the world is Mine, and all its fullness. Will I eat the flesh of bulls, Or drink the blood of goats? Offer to God thanksgiving, And pay your vows to the Most High. (Psa 50:11-14 NKJ)

The offering given to God is given in thanksgiving or it is useless.

It is quite accurate to view the whole of the life given to Israel as an economy of thanksgiving. The system of the tithe, giving to God a tenth of possessions, is not a system of payments, “rent” given to a heavenly landlord. It is an offering of thanks, an act of communion, sharing with God the very life of the land itself. God and Israel have a communion in the land – something which truly makes it the land of promise.

The system of the Sabbath, when rightly observed, has the same character. The Sabbath Day represents God’s time, set aside from labor. Acquisition stops. Time itself becomes an act of thanksgiving. The more radical practice of the Sabbath, when an entire year (the seventh year) is set aside demonstrates how profound the nature of this communion was intended to be. Debts were cancelled in the seventh year. We set others free from their bonds because God has set us free from ours. Former slaves should not create new slaves – it would be an act that negated the giving of thanks.

It seems to me not surprising that the penal substitution theory of the atonement has had such a cultural popularity over the centuries. It became at home in a penal culture – one of debts and punishments. The good, the industrious, the diligent and the frugal prosper and reign. The sluggard, the weak, and the slothful fall ever further into poverty, driven by their own sin. There are many things that ameliorate this model in modern culture, but it remains at the structural heart of our lives.

The atonement, Christ’s death and resurrection, do not have a place within such a structure. His death is not a payment within a world of payments – an ultimate sacrifice that we could not afford. It is rather the trampling down of the whole world of payments, demolishing the greatest debt of all: death. The sacrifice of Christ is not like the blood of bulls and goats, only human. It is Life poured out on death, thanksgiving triumphing over necessity. Every act of thanksgiving is a communion in the death and resurrection of Christ. It is for that reason that the thankful are capable of salvation – for the giving of thanks makes manifest the fundamental shape of salvation.

All of this is the reason that from the earliest times, the offering of Christ’s Body and Blood has been known as the Eucharist. It is the Thanksgiving. Were this not so, the Church would have named this most central act of its life something else: the Lord’s Supper or Holy Communion. These are later titles given in an effort to distinguish Protestant worship from Catholic. The word Eucharist is returning to common usage, however. It will be truly significant when the Eucharist (thanksgiving) returns to Christians as a way of life.

The stuff of our daily lives should have more kinship with Old Testament sabbath-thought than with the theories of Adam Smith, Milton Friedman, Maynard Keynes and the like. For when we work for some reason apart from the giving of thanks, we labor as slaves, bound to whatever it is that we perceive as necessary. Christ would free us from such bondage:

This is not a commandment from Christ to cease working. But it is a commandment to work rightly. Our labor is right and good when it is done in communion with God, and this is done primarily in the giving of thanks. The heart of thanksgiving precludes the sense of entitlement – for who gives thanks if what he has was something to which he was entitled? My work, my cleverness, my investments do not give me claim to wealth. For if they give me claim to wealth, then why should I be grateful for what I have?

But Christ gives us everything: “All things come of Thee, O Lord, and of Thine own have we given Thee.” And, “Thine own of Thine own we offer unto Thee, on behalf of all and for all.” If all that I have is a gift for which I give thanks, a means of communion with God, then why should I begrudge sharing it with anyone? Indeed, the act of sharing is itself a primary and inherent part of giving thanks. We give to others because what we have has been given to us. Like Israel, we have communion with all those who are strangers to the goods of this world, for we ourselves once were strangers:

Also you shall not oppress a stranger, for you know the heart of a stranger, because you were strangers in the land of Egypt. (Exo 23:9 NKJ)

The giving of thanks is not a moral activity: like communion, it is a mode of existence. There is no Christianity that does not include the giving of alms. Sharing belongs to the ontology of the faith.

But do not forget to do good and to share, for with such sacrifices God is well pleased. (Heb 13:16 NKJ) Let Us Give Thanks Unto the Lord!

Let Us Give Thanks Unto the Lord!
Today is a special day for Americans, but it also provides us with a wonderful opportunity to remind Orthodox Christians around the world to give thanks unto the Lord, for He is good, and His mercy endureth forever. On Thanksgiving
Abbot Tryphon
The hope of eternal life is worthy of our struggle in this life, as we prepare for our life worshiping before the Holy Trinity. We have much to be thankful for.