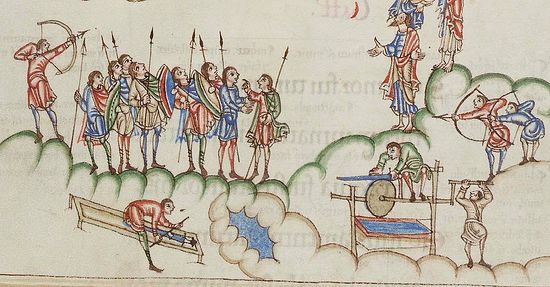 Lately I came across an interesting bit of theologizing. The author (who shall remain nameless) spoke of his love for Psalm 139 (“one of my absolute favorite psalms”). In it he said that “right smack dab in the middle of this Psalm, King David calls for God to slay his enemies and declares that he has nothing but hatred for them”.   He refers, of course, to verse 21: “Do not I hate them that who hate You, O Lord? And do I not loathe them that rise up against You? I hate them with perfect hatred; I count them my enemies”. The author contrasts this attitude with Christ’s words about loving one’s enemies, and characterizes the voice of David in this verse as “the sinful voice of a human”. Though he says we ought not to “throw the Old Testament out, nor read it flatly without any discernment”, and though he asserts that though “Psalm 139 is full of inspiration”, he still says, “David’s own paradigm comes through. It’s all [David] knows in his time. He can’t yet apply the awareness of his divine belovedness [sic] to his enemies”. The upshot is that we must “pick and choose in the Bible. Always pick and choose Jesus”. That is, for him some bits in the Scriptures are devoid of inspiration or authority, and ought to be jettisoned since they are merely the voices of sinful humans, men incapable of rising to a divine standard. If something in the Old Testament mirrors the Gospel counsel in the New Testament, it may be allowed to stand. If not, out it goes. It is not the sinful Old Testament author’s fault however; “it’s all he knows in his time”. It is an extraordinary bit of exegesis, worthy of the heretic Marcion himself—or perhaps of the Biblical sceptics that made German theological liberalism so famous in the last century.

It is difficult to deal with the author’s exegesis in any depth, since his thought is not clear. Since he may or may not be capitalizing pronouns referring to God (e.g. “David calls for God to slay his enemies”), it is hard to be sure of his meaning: does he assert that smack dab in the middle of the Psalm King David calls for God to slay David’s enemies, or God’s enemies? The immediate contrast with Christ’s counsel to love one’s own personal enemies would suggest the former, in which case his exegesis is simply wrong. King David declares his hatred not for his own foes, but for God’s foes—that is the point of saying that he regards them as if they were his own enemies. If he was talking about his own personal enemies, the verse would make no sense—of course one regards one’s own foes as foes. The point was David’s zeal for God, which impelled him to make God’s cause his own. Though those men were not David’s personal enemies, he regarded them as if they were in his zeal for God.

This bit of confused theologizing is significant because many people fall into the same trap of regarding bits of the Old Testament as unworthy, unspiritual, immoral, and (frankly) as rather embarrassing.   No less a thinker than C.S. Lewis looked at the cursings in the Psalter as something unfortunate, embarrassing, and to be explained away (in his otherwise wonderful book Reflections on the Psalms). But a view of Old Testament Scripture which declares that “Whoever relaxes one of the least these commandments and teaches men so shall be called least in the Kingdom of heaven”, and that “it is easier for heaven and earth to pass away than for one dot of the Law to become void” (Matthew 5:19, Luke 16:17) will not so easily jettison chunks of those Scriptures. Neither ancient Marcionism nor modern Biblical liberalism are live options for the Orthodox.

And make no mistake: the offending bits are indeed large chunks. Our unnamed author spoke of his favourite Psalm 139, but similar citations could easily be multiplied. Many other parts of the Psalter extol holy hatred of unrighteousness and disgust at those who promote it. Take for example Psalm 119, so valued by the Orthodox that it is constantly used in Matins. Look at verse 53: “Hot indignation seizes me because of the wicked who forsake Your Law”. Or look at verse 113: “I hate double-minded men, but I love Your Law”.   Or verse 136: “My eyes shed streams of tears because men do not keep Your Law”.   Or verse 139: “My zeal consumes me, because my foes forget Your words”. Or verse 158: “I look at the faithless with disgust because they do not keep Your commands”. Such an abundance of antipathy in a psalm which has won such a place in the liturgical tradition of the Church cannot be so easily dismissed by simply suggesting that “it’s all the Psalmist knows in his time” as if the Holy Spirit found the task of inspiring a sinful Psalmist too daunting. We cannot jettison it as unworthy. The solution to our perceived dilemma must lie elsewhere.

One thing the unnamed author never did was to inquire what the word “hate” meant in the offending verse. He apparently assumed that it meant “to plan to hurt, to retaliate, to strive to inflict pain and misery, to slay”. Christ indeed forbids such a lust for revenge and for gleeful infliction of pain upon one’s personal foes. We must not try to hurt our personal foes—bashing them over the head or keying their car—but simply pray for them and commend them to God. But there is no evidence that the Psalmist in Psalms 139 or 119 was talking about that kind vengeful action.

We may begin by asking what the word “hate” actually means in its Biblical context. Briefly, it means to categorically and emphatically reject. Thus Christ tells us to “hate” our father and mother and wife and children and even our own life if we would truly be His disciples (Luke 14:26). Obviously He does not mean one should entertain personal loathing for our family or try to hurt them. He means that if it comes down to a choice between family and Christ, we must categorically and emphatically reject all the members of our family and their appeals to family loyalty, and choose Christ instead. To hate=to reject. That is also the meaning of God’s declaration in Malachi 1:2-3 (quoted in Romans 9:13): “I loved Jacob but I have hated Esau”. God did not loathe Esau personally. He “hated” him in that He rejected him as bearer of Abraham’s covenant, and confirmed that covenant to his brother Jacob instead.

Understanding this allows us to return to the Psalter with fresh eyes. David (and the author of Psalm 119) were not declaring that they personally loathed wicked and evil men and wanted to hurt them so much as they decisively rejected their evil ways. David was declaring his decision to shun their wicked ways however attractive they might have been and to choose righteousness instead. That is why immediately after saying that he hated God’s foes with perfect hatred, he went on to say, “Search me, O God, and know my heart! Try me and know my thoughts and see if they be any wicked way in me and lead me in the everlasting way”. He hated wickedness when he found it in wicked men, and also when he found it in himself, which is why he asked for God’s help to root it out from his heart.

The odd exegesis with which this blog began provides a cautionary tale. We do not have the liberty to “pick and choose in the Bible”. It is all God’s Word and must be accepted as “inspired by God and profitable for teaching, for reproof, for correction, and for training in righteousness” (2 Timothy 3:16). If something seems to be unfortunate and embarrassing that is almost certainly a sign that we are missing something and not understanding what it is really saying. The Psalter contains many examples of holy hatred (as do the letters of St. Paul—see for example 2 Corinthians 11:13f, Galatians 5:12, Philippians 3:2, 18f). Let us imitate this holy hatred and reject decisively the wickedness that abounds in our world. Such a wicked way may also lurk in our own thoughts and hearts. Let us pray that God may search us and root it out. Do You Have the Proper Understanding of Scripture?
Fr. Athanasios C. Haros
"How we understand the Scriptures will have an effect in how we understand God and His plan for our salvation. If we have an incorrect understanding as the Pharisees did, then we run the risk of rejecting Him and following our own (or others’) interpretation of what it means to be saved."

Anthony11/30/2016 12:55 pm
Why are we the reader not provided with a link to the offending article/blog post itself. It would make far more sense to allow we the reader to read first hand what was written and then to compare with the arguments put forth in the above post instead of simply feeding us nuggets and expecting us to be able to digest the arguments put forth.
×