All the tears that you have shed will glitter like diamonds on the robes of the Mother of God; for all your sufferings and trials God will especially bless you and reward you. 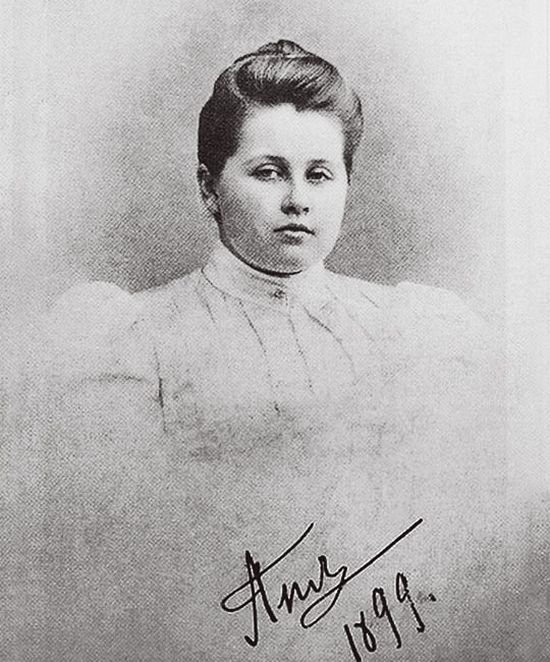 There are a number of ancient Orthodox saints in Scandinavia: St Anschar (Oscar, + 865) in Demark; St Sunniva (c. 990), St Olaf (+ 1030) and St Hallvard of Oslo (+ 1043) in Norway: St Olaf (+ 1022), St Sigfrid (+ 1045) and St Anna of Novgorod (+ 1050) in Sweden. However, there is no ancient Orthodox saint in Finland as such, as it came to the Faith so late, already in Roman Catholic times, so it missed out on being in communion with the Church. However, in the renewal of Orthodoxy in modern times Finland does have a saint: Righteous Mother Maria of Helsinki.

Born on 16 July 1884 in Oranienbaum in Russia as Anna Alexandrovna Taneyeva into a family with Imperial connections, she was to become a lady-in-waiting and the closest friend of the Tsarina Alexandra. Snobbish and profoundly jealous aristocrats, rich but without nobility and imbued with selfish vanity and vulgarity, detested her. Typically for them, they dismissed here and slandered her as stout, unattractive, talkative, naive and unintelligent. However, children loved her and the pious Tsarina saw her pure, kind-hearted and childlike face and beautiful, tender eyes and valued her immense piety and generosity. Thus, the Tsarina befriended Anna, preferring her to the superficial and unspiritual court snobs, and in 1905, at the age of twenty, Anna was given a position at court. The three following years she went on holiday with the Romanovs.

In 1907 Anna Taneyeva married Alexander Vyrubov, an officer in the Imperial Chancellery. A few days before she had been warned by Gregory Rasputin that the marriage would be an unhappy one, but she had ignored him. The marriage remained unconsummated, for Anna’s husband did indeed turn out to be mentally deranged, having tried to kill her, and had to go for treatment in Switzerland. Within eighteen months the unconsummated marriage had been annulled. After the Revolution Anna’s mother told interrogators that her son-in-law had ‘proved to be completely impotent, with an extremely perverse sexual psychology that manifested itself in various sadistic episodes in which he inflicted moral suffering on her’.

Anna Vyrubova, as she had now become known, became one of Elder Gregory Rasputin’s followers and on orders from the Tsarina went to visit his home village of Pokrovskoe in Siberia in order to investigate rumours about him, which turned out to be baseless. Her importance grew at court and with the death of St John of Kronstadt Elder Gregory became more and more important to her. For some years she served as a go-between for the Tsarina and Elder Gregory at those times when his healing powers were needed. During World War I Anna trained as a Red Cross nurse and cared for soldiers along with the Tsarina and the Tsarina’s two older daughters, the Grand Duchesses Olga and Tatiana. Her great generosity to the poor left her virtually penniless.

In January 1915 Anna was severely injured in a train accident between the capital and Tsarskoye Selo; the convalescent found herself crippled, but credited Gregory with saving her life through his prayers. In September 1916 she, Lili Dehn and Gregory went to Tobolsk to venerate St John of Tobolsk who had been canonized. Anna opened St Seraphim’s military hospital with the huge amount of 100,000 roubles she received from the railway company in compensation for her accident. She also planned to build a church dedicated to St Seraphim of Sarov on her property.

On the evening of 16 December 1916 Elder Gregory told Anna of a proposed visit to Prince Yusupov in order to meet his wife who was reportedly ill. The next morning Gregory’s disappearance was reported by his daughter to Anna. An investigation followed and the murderers Prince Yusupov and Grand Duke Dmitri were placed under house arrest. Two days later Gregory’s brutalized body was found. On 21 December it was taken to be buried in a corner on Anna’s property adjacent to the Imperial Palace. The burial was attended by the Imperial couple with their daughters, Anna, her maid and a few of Gregory’s friends.

On 21 March 1917, very ill with the measles, the much slandered Anna Vyrubova was arrested for no reason by the masonic Kerensky dictatorship. Completely innocent, she underwent five months of harsh imprisonment in the Peter and Paul Fortress in Saint Petersburg that even included an unnecessary and humiliating medical examination to prove her virginity. The fifteen interrogations on her political role concluded that she was too morally upright, honest, sincere and childlike to have done anything wrong and she was released.

Anna’s memoirs describe her harsh treatment in the damp prison, her illness, the beatings, kickings, mockings and being spat upon, and her narrow escape from execution when, miraculously, she met several old friends of her father on a Saint Petersburg street who helped her to escape. This she attributed to St John of Kronstadt, who had already consoled her in a dream before her arrest. She endured much hardship and poverty avoiding the Bolsheviks, but only reluctantly escaped to Finland in early 1921.

Her memoirs, Memories of the Russian Court[2], published in Paris in 1922, provide rare and valuable descriptions of the home life of the Tsar and his family. No-one understood Gregory Rasputin and the Tsarina better than Anna. Condemned and slandered by the worldly as naïve and unintelligent, she had foreseen everything that would happen with the overthrow of the Tsar. The “intelligent” politicians and aristocrats who had betrayed the Tsar had foreseen nothing.

In 1923 Anna became a nun at the monastery of Valaam under the name of Mother Maria. She lived under the spiritual direction of Valaam elders and lived in poverty as a pious Russian Orthodox nun. Unable to enter the convent of her choice due to her physical disabilities, she stayed in her own very modest house, living the strict monastic life of a secret nun. At first she lived with her mother and then, when she died in 1937, a loyal friend called Vera Zapevalova (+ 1984), poorly and reclusively.

Anna spent this second half of her life first in locations in Finland, then in Sweden and after the Second World War in Helsinki. For over forty years a nun, she died penniless aged 80 on 20 July 1964 in Helsinki, where her grave is located in the Orthodox section of the Hietaniemi cemetery. She had been born one day before the date of the martyrdom of the Imperial Family and reposed three days after it. In birth, as in death, she had been tied to them. So ended the life of one who was faithful to the end to the ideals of God, Tsar and Homeland.

“In Finland you have a saint—Anna Vyrubova,” said a hieromonk from the Trinity St Sergius Lavra. “Turn to her in any need for help. Go to her grave in the Orthodox cemetery there, stand and pray. Feel how easy it is to pray there, how calm and peaceful your soul becomes” (Bishop Arseny).[3]

“May God help us all….to unite with one another in peace and love, offering our tears and ardent repentance to the Merciful God for our countless sins, committed before the Lord and the Tsar crowned by God…And only then will a great and mighty Russia rise up, for our joy and for the fear of our enemies’.[4] Sermon by Metropolitan Philaret (Voznesensky) on the Royal Family
Metropolitan Philaret (Voznesensky)
At one time, even fairly recently, the date July 17 in the so-called “new style,” was marked as a day of sorrow, because on this day the Russian people and the Russian diaspora remembered the great evil act when the Royal Family was brutally killed in the basement of Ipatiev House.
Comments
×