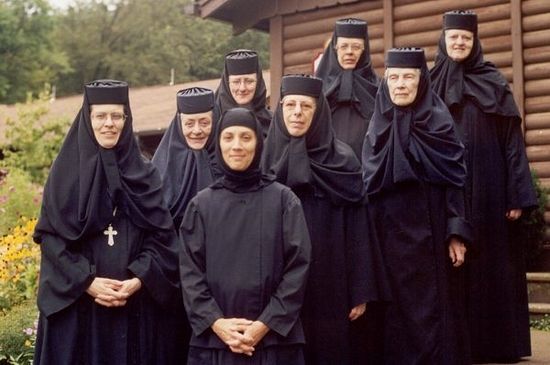 The expectations of widows in the New Testament Church are in most respects the same as those of the later Byzantine order of deaconesses:

[A woman among the widows] trusts in God, and continues in supplications and prayers night and day. Not under sixty years old, having been the wife of one man. Well reported of for good works; if she have brought up children, if she have lodged strangers, if she have washed the saints’ feet, if she have relieved the afflicted, if she have diligently followed every good work (1 Tim 5:5,9-10).

Deaconesses as a canonical order first appear in the third-century Didascalia. There we read that deaconesses should do the anointing of women at baptism, instruct women neophytes, and visit the women faithful, especially the sick, in their homes. They were forbidden to confer baptism themselves, or to play a part in the Eucharistic offering. The deaconesses had supplanted the widows. The bishop may still institute widows, but they should not either teach or administer baptism, but only pray.

The Apostolic Constitutions, a collection that reached its final form about 380 AD, included deaconesses as part of the kliros, which we may be rather anachronistic in rendering as “clergy” but it’s close enough. The AC made a distinction, however, counting deaconesses as clergy while the widows were excluded. The AC clarifies, “The deaconess does not bless, and she does not fulfill any of the things that priests and deacons do, but she looks after the doors and attends the priests during the baptism of women, for the sake of decency.”

Beginning in the late fourth century there is an abundance of description of the deaconess’s ministry to women in the Byzantine Church. At this point the way of life of deaconesses was very similar to that of nuns. The woman in charge of a monastic community of women was called a deaconess, as is testified by St Gregory of Nyssa; St John Chrysostom’s correspondence with Olympias, the deaconess in charge of a women’s monastery, is preserved today. Ordained deaconesses or abbesses wore the maforion or veil.

After the tenth century deaconesses were only named in connection with charitable institutions. In the Pontifical of Patriarch Michael of Antioch (1166-1199) we read:

In ancient times, deaconesses were ordained. Their function was to look after women so that they should not have to uncover themselves before the bishop. But when religion spread more widely and it was decided to administer baptism to infants, this function was abolished.”

When commenting on canon 15 of the Council of Chalcedon [regarding widows], Theodore Balsamon, at the end of the twelfth century, observed:

the topic of this canon has altogether fallen into disuse. For today deaconesses are no longer ordained, although the name of deaconesses is wrongly given to those who belong to communities of ascetics.

Deaconesses do not appear until the fifth century, and then primarily in terms of condemnations. The Statuta Ecclesiae Antiqua entrusted instruction of women catechumens to the widows and women ministers (ad ministerium baptizandarum mulierum.) Councils of the fourth and fifth centuries reject every ministerium feminae and forbid any ordination of deaconesses. According to the Ambrosiaster (Rome, late 4th century), the order of deaconess was associated with of Montanist heretics. In the sixth century, women admitted into the group of widows were sometimes referred to as deaconesses. To prevent any confusion the Council of Epaone (517 AD) forbade “the consecrations of widows who call themselves deaconesses.”

Deaconesses continue to appear in Western Christian sources well into the ninth century, where Carolingian texts generally assume they are identical to widows. The Romano-German Pontifical (Mainz, 10th century) contains separate blessings for abbesses, widows, deaconesses, and virgins, in that order (ordinatio abbatissae, consecratio virginum, ad diaconam faciendum, consecratio viduarum) This is the last mention of deaconesses found in the Latin rituals; the Pontifical of Guillaume Durand at the end of the thirteenth century speaks of deaconesses only with reference to the past.

To sum up: Deaconesses were a temporary phenomenon, largely parallel to, and eventually absorbed into the practical ministry of abbesses and nuns. Women’s Empowerment in Alaska: Bible Studies at The St. Herman Theological Seminary
St. Herman of Alaska, whose repose we commemorate today, would be proud. In the seminary named after him in Kodiak, Alaska, native women from tribes throughout the state gather to gain the knowledge and experience they need to contribute to the spiritual health of their villages. Orthodox pastors on whether sex discrimination exists in the Church

Orthodox pastors on whether sex discrimination exists in the Church
Today there has been much discussion on the issue of women’s equality. Some find a “violation of women rights” even in the Orthodox Church. Indeed, an Orthodox woman cannot become a priest (or “priestess”), she cannot enter the altar, she submits to her husband in marriage and so on. But is it really sexism? Is there gender inequality in Orthodoxy? What is the role of women in the Church? What should we say to heterodox Christians and non-believers regarding “women’s priesthood”? The Great Name of Woman

The Great Name of Woman
Metropolitan Athanasios of Limassol
The feminine principle has great meaning in creation. This is manifested on all levels of human existence, both personal and societal. A woman acts in a very special way: she is like a filter that cleanses from evil. Woman’s nature is God’s creation.

Sermon on the Healing of the Woman with the Issue of Blood
Twenty-Third Sunday After Pentecost
Archpriest Andrew Phillips
Today's Gospel concerns two miracles, one the healing of an illness and the other the overcoming of death. These two miracles are closely linked, for both illness and death have the same origin, the same cause, they are both the result of sin, both entered the world as a result of the sin of Adam. As the Apostle Paul says in his letter to the Orthodox Christians in Rome, 'the wages of sin are death'. Saint women of the Orthodox Church and Islam
Yuri Maximov

Saint women of the Orthodox Church and Islam
Yuri Maximov
In the early 18th century in the Oman Empire in the provincial town of Prusse there lived a beautiful Greek girl called Argery. She was brought up by pious parents and in her youth years she met her love – a kind Greek youth. They got married in the church and their honeymoon was happy. But, their Turkish neighbour was inflamed with lust towards Argery and tried with his sweet words to talk her into committing adultery in the absence of her husband. The pious wife declined his encroachments. Then the embittered Turk slandered her before the judge of Prusse by telling that she had promised to become Moslem. ...
Comments
×