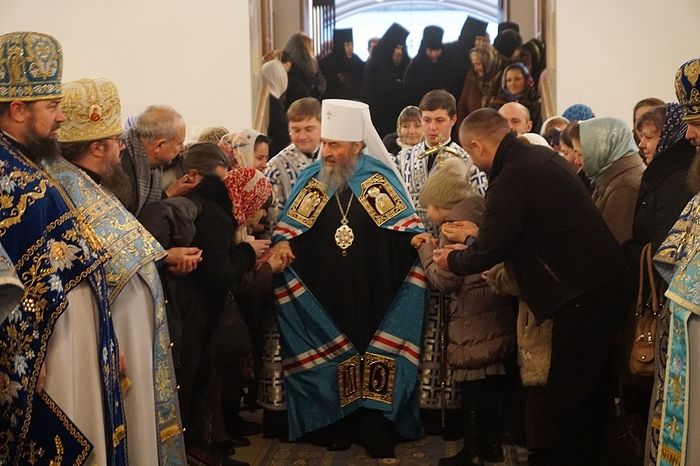 It was precisely in the Temple that the Blessed Virgin Mary prepared her soul to become the container of the uncontainable God.

His Beatitude Metropolitan Onufry spoke about this in his homily on the feat of the Entrance of the Theotokos into the Temple.

“People sometimes say it’s not necessary to go to church to pray, that you can pray anywhere,” noted His Beatitude, “and it’s correct—you can and should pray in every place. But there are places that are dedicated to prayer.”

He emphasized that everyone who tries to live like a Christian understand this.

“The Orthodox person knows that it’s easier to pray in church than in other places. In church there is that grace which helps a man in his prayer. Church is where Christians grow spiritually,” underlined the primate.

He stated that it was precisely in the Temple that the Blessed Virgin Mary prepared her soul to become the container of the uncontainable God.

“The Most Holy Virgin Mary spent ten years in prayer in the Jerusalem Temple. There she made her soul a chamber for the King of Heaven,” said Metropolitan Onufry.

His Beatitude noted that the church is also the place where the Mysteries are celebrated.

“The Lord Himself is always found in church in His Most Pure Body and Blood. Here is celebrated the Mysteries of the Eucharist, Baptism, Marriage, Chrismation, Confession, Unction, and Ordination to the priesthood,” he noted.

On this the primate noted: “Indeed, we need the grace of God everywhere and to pray to God in all places, but the strongest prayer is in the church of God.”

“And we, dear brothers and sisters, today beseech the Holy Virgin Mary to help us live spiritually, so we wouldn’t forget that the church of God is a temple of prayer,” he concluded.

December 4, 2016, on the feast of the Entrance of the Theotokos into the Temple, His Beatitude Metropolitan Onufry of Kiev and All Ukraine celebrated the Divine Liturgy in the Entrance convent in Chernivtsi. His Beatitude Metropolitan Onuphry: We pray before the relics of saints because they have the power of life
The righteous do not die—they live eternally. How to attain peace between all people—Metropolitan Onuphry
After the reading of the Sunday Gospel which spoke of the Beatitudes, the primate described the characteristics of a true peacemaker. Patriarch Kirill calls upon the plenitude of the Russian Church to continue praying for peace in Ukraine
"We all should give all possible support to His Beatitude Metropolitan Onufry, the episcopate of the Ukrainian Orthodox Church, its clergy and faithful in their efforts for peace. Your Beatitude, your efforts are an example of how Orthodox Christians seek unity there where division is propagated and sow love there where hatred is spread."
Comments
×