The Mystical Theology of the Western Hat 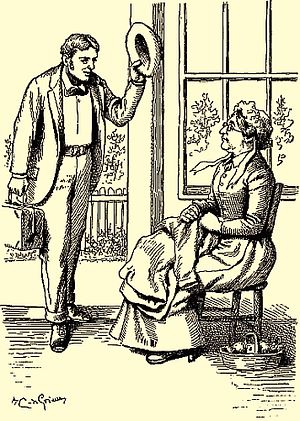 It used to be the norm in western culture for men to wear hats, and there was a common and recognized etiquette regarding the wearing of the western hat. One did not wear it, for example, when in someone’s home, or in a house of worship. One would remove one’s hat when the dead were carried out in one’s presence. One would also remove one’s hat in the presence of one’s sovereign (or, in America, when the National Anthem was being played)—and significantly, when greeting a woman (see inset picture).

Common to all these occasions of hat removal (called “doffing one’s hat” for the historically-minded) was the desire to show honour to someone or something. (It was often coupled with the equally-ritualized act of standing up if seated. Thus, if a group of men were sitting down together at a table and their King happened to approach, they would all rise as a sign of respect.) It was part and parcel of a universally-recognized way of being civilized, and refusal to doff one’s hat would have been taken as a deliberate act of defiant disrespect and insult.

It almost goes without saying that such ways have vanished almost without a trace. When I remove my hat now in the presence of a woman (or rise to my feet when she enters the room) I am often regarded with either studied incomprehension or perhaps befuddled amusement, as if I had said something anachronistically medieval like, “forsooth” or “gadzooks”. A generation or two of feminism has all but swept away such special treatment. If I hold the door open for a woman (another anachronistic act of masculine honour), the woman is often surprised. And sometimes, not pleased. “Thanks, but I can get my own door”, say the spiritual children of Betty Friedan.

I’m sure they can. But the door was not held for them because I thought them weak. On the contrary the door was held open (and the hat removed and the relaxed seated posture abandoned) because I recognized in them something strong. That is, like all persons whose roots are sunk into what is left of Christendom, I recognize that a woman is worthy of honour simply because she is a woman. God has shared with womankind a secret He has not shared with the men—namely, the ability (all things being equal) to bear life and to function in the world as His co-creator, with all that this entails. Through childbirth, a woman becomes the unique instrument of God as He continues to create the world. That is one reason (among others) why men should honour them. Certain tasks are the specific tasks of men in society, and certain other tasks pertain especially to women. On this binary, the world has been built, and on it the world continues to spin. One can express this by saying, “Men are from Mars, Women are from Venus”, or one can say, “In the beginning God created male and female”. But however it may be expressed, this non-interchangeable binary is the basis for everything that is precious, healthy, and strong in our society. (Our current re-defining of gender and preoccupation with “transgender rights” threaten to undo this.)

Two groups of people recognize this binary ordering of the world instinctively: children and classical love poets. Children know that mommy and daddy are not interchangeable. When there is burglar in the house or aliens on the roof or spiders under the bed, it is daddy who gets the call. When there is a hurt to be kissed or a wound to be bandaged, that is a job for mommy. This was brought home vividly to one dad, who watched his little boy fall off his bike, skin his knee, and go running past him into the house to find mommy. He thought with some hurt perplexity, “Why did my child not run to me?” He need not have been so perplexed: the child loved his dad, but knew that mommy was the one to find for that specific task, not daddy.

The other group that understands this dynamic are the love poets. Most men understand this spiritual binary, at least when they are in love. Whether or not they manifest their love in poetry, they all know that when a man proposes to a woman, he is the one who goes down on one knee. Having her go down on one knee and kneel before him would not only violate historical custom, but something more basic. He is honoured by recognizing in her something worthy of veneration. That is why he kneels to her—and doffs his hat, and rises to his feet, and holds her door. Nowadays such behaviours are sometimes considered gallant, or perhaps quixotic. They used to be considered as simply civilized.

None of this masculine behaviour, of course, is logical. It is something deeper than merely logical. It is mystical. Mysticism (as I here use the term) taps into the deepest roots of what it means to be human; it expresses the inner tao of the way we were made. Some deny that there is anything mystical about gender and say that recognizing validity in any specific gender roles is hogwash or worse. In this view gender has no transcendent significance; but simply describes anatomical or biological differences.

It seems therefore that a great abyss has opened and now separates those who regard womanhood as something special, precious, and worthy of honour from those who regard it as simply one of two anatomical options. But there are losses involved when a culture embraces the second view as thoroughly as ours has. In a previous generation, everyone acknowledged that in event of catastrophe, one must save the “women and children” first. Now it is every man (or woman) for himself. The world has grown more dangerous for women, and darker for everyone. When a culture denies its mystical roots, everyone is the loser, regardless of their gender. Unwavering fidelity to the holy tradition
Dr. Constantine Cavarnos
"A person must have zeal and persistently search for a place—a parish in the 'world' or a monastery—where there is authentic, traditional Orthodox Christianity. Our Lord Jesus Christ said, 'Ask, and it shall be given you; seek, and ye shall find; knock, and it shall be opened unto you.'” Binary Code
Fr. John Guy Winfrey
The hierarchs, clergy, and vast majority of Orthodox Christians are quite clear on the issue of marriage as a sacred institution, consisting of one man and one woman. But because of the opportunity for anyone to post an opinion on the internet without going into detail about their own standing in the Church, other articles also occasionally need to be posted to explain what is really going on. Here is one blog post by Fr. John Guy Winfrey of the Antiochian Archdiocese of America, with some original thoughts on the nature of things.

Conchita Wurst and the Final Emancipation
Roman Nosikov
The victory at the Eurovision contest of “bearded woman” Conchita Wurst has evoked stormy popular reaction ranging from ecstasy to utter disgust. The different sides are energetically discussing the event, and each other’s reaction to it.
Comments
×