Example of St. Ambrose of Milan

Photo: http://days.pravoslavie.ru/
Today, December 7/20, we celebrate the memory of our Father Among the Saints Ambrose of Milan. The Life of the Saint, written by his close disciple Paulinus, relays important information on the state of the Church at the time and the way in which the Saint was elected bishop, which is quite relevant to our contemporary situation and very instructive for us vis-a-vis how the Fathers of the Church dealt with heresy.

I will state them plainly and then comment again on them below, in the midst of excerpts from the Life of the Saint:

1. Fifty years AFTER the First Ecumenical Council, which condemned Arianism, it is clear that there were Arians and Orthodox within the same Church communion.

2. The battle against Arianism raged for many decades WITHIN the Church, so much so that we see Arians succeeding Orthodox hierarchs and vice versa.

3. Elections of bishops were conducted within a local church, even within each parish, by BOTH Arians and Orthodox parishioners, meaning that they were in communion and attending the same parishes, communing of the same Chalice. (This is also apparent in the Life of St. Meletios of Antioch.)

4. St. Ambrose accepted the role of the Arian Emperor and even his intervention in his election as bishop.

Excerpts from the Life of St. Ambrose, on how the Saint was elected bishop, with commentary:

“In 374, after the death of Auxentius, a bishop of the Arian heresy who took possession of the Church of Milan after Dionysius the Confessor, of blessed memory, was sent into exile, the people were about to revolt because they did not have a bishop.”

~ This is the first fact which is noteworthy: An Arian heretic succeeded an Orthodox Confessor as bishop, only to be succeeded by another Orthodox Confessor, St. Ambrose, as we shall see. Clearly, the idea promoted today that the Orthodox are obliged to cease not only commemoration of a bishop preaching heresy bareheaded but even all communion with those who continue in communion with the heretical bishop was unknown, or at least, not applied by the Church in the fourth century (at least in Milan and Antioch). ~

“Ambrose, who had recently been appointed consular governor of Liguria and Emilia, had the task of putting down the revolt. So he went to the church, and when he was addressing the people, the voice of a babe in the arms of his mother from among the people is said to have called out suddenly in a clear voice, “Ambrose bishop.”1 At the sound of this voice, the mouths of all the people joined in the cry: “Ambrose bishop!” Thus, those who a while before were disagreeing most violently, because both the Arians and the Orthodox wished the other side to be defeated and their own candidate to be consecrated bishop, suddenly agreed on Ambrose with miraculous and unbelievable harmony.”

~ The situation depicted here, with Arians and Orthodox together electing a common bishop, must come as a surprise to all those who support the ecclesiology which insists that Orthodox clergy and layman MUST cease all communion with heretics—even before a conciliar condemnation. But, even more striking is that this is fifty YEARS AFTER the first Ecumenical Council that had condemned Arianism. Thus, even the widely accepted position today that says that after a conciliar condemnation of a heresy the Orthodox must not have communion with those preaching the condemned heresy is not evidenced here. How much more absent, then, is the idea that even before a conciliar condemnation, the Orthodox are REQUIRED to cease communion. Clearly, the Orthodox of the fourth Century, that “golden age” of patristic witness, had not arrived even at the conclusions of the 15th canon of the 1st-2nd Council, which praises and protects (but does not require) the priest or bishop who ceases commemoration and communion *with his immediate superior* because he has preached heresy “bare-headed”, i.e. as the faith of the Church. ~

“After St. Ambrose initially fled the praise and honor the people showed him, and when he had been found and was held in custody by the people, a report was sent to the [Arian] Emperor Valens2 who rejoiced in the choice of the people and ordered that Ambrose should forthwith be baptized and consecrated. The provincial bishops also endorsed the action of the Emperor and the people. Ambrose was compelled to consent to receive the office and dignity thus enforced upon him by the whole body of the faithful. For their choice was looked upon not as being of their own mere motion, but, as all agreed, under the manifest guidance of a higher power.” 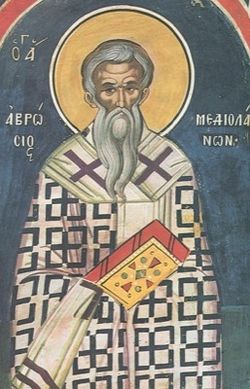 Photo: http://www.patriarchia.ru/
The inescapable conclusion is that the Orthodox at the time, while struggling continually for the universal acceptance of the decisions and Faith of Nicea, did NOT possess the contemporary ecclesiological outlook of those who see as MANDATORY the indiscriminate cessation of communion with any and all who are in communion with heretical hierarchs (who today preach bare-headed the heresy of syncretistic ecumenism). They clearly struggled against heresy without “walling off” or declaring the mysteries of those in communion with heretical hierarchs as “null and void” (even, amazingly, fifty years after the First Ecumenical Council had condemned the heresy).

Moreover, they also do not appear to possess another theory currently being proposed by some that, even though the Eucharist of those in communion with heresy-preaching hierarchs is true, those who commune in those churches are not enlightened but actually spiritually darkened. For, the Orthodox in the time of St. Ambrose were clearly in communion not only with heresy-preaching hierarchs who had yet to be synodically condemned, but heretics professing a heresy ALREADY condemned by an Ecumenical Council.

Given the witness of St. Ambrose and the Orthodox of his time, our conclusion is this: Although the Royal Path of resistance to syncretistic ecumenism does indeed include the possible (not obligatory) cessation of commemoration of heresy-preaching hierarchs, per Canon 15 of the 1st-2nd Council (under St. Photios in 8613), it does not include the cessation of communion with those who have not done so but remain in communion with the (yet-to-be condemned by a Council) heresy-preaching hierarch. The life and witness of the times of our Father Among the Saints Ambrose of Milan (and St. Meletius of Antioch) make this much abundantly clear.

1 This is according to Western sources. The Synaxarion of Hieromonk Macarius omits this miracle and simply states that on the strength of the Saint’s noble manner, gentleness, conviction and peaceful spirit, all cried out with one accord, “Ambrose for Bishop!”

2 This is according to the Synaxarion by Hieromonk Macarius of Simonopetra. Other versions of the saint’s Life have the emperor as Valentinian I.

3 This Council is given this title by Zonaras, Balsamon, Blastaris, and others. The great and holy First-and-Second Council, which was held in Constantinople in the all-venerable temple of the holy Apostles, was assembled in the time of Emperor Michael, the son of Theophilus, and of Bardas Caesar, his uncle on his mother’s side, in A.D. 861. It was attended by three hundred and eighteen Fathers. This Council has been assigned by all commentators a place preceding the other local Councils held previously to this one, either because of its having been a large one and one more numerously attended than were those, or rather because it followed immediately in the wake of Seventh Ecumenical Council both in respect of the date and in that it was convoked against the same iconomachists as those against whom that one was convoked; and, in a way, this Council was, in that respect, a continuation or successor of that one. The Basilica of St. Ambrose in Milan, Italy