A miracle that occurred early in December at Docheiariou Monastery on Mt. Athos has been recounted by a monk who witnessed that event. This story was also recounted during a public Church event in Thessaloniki. 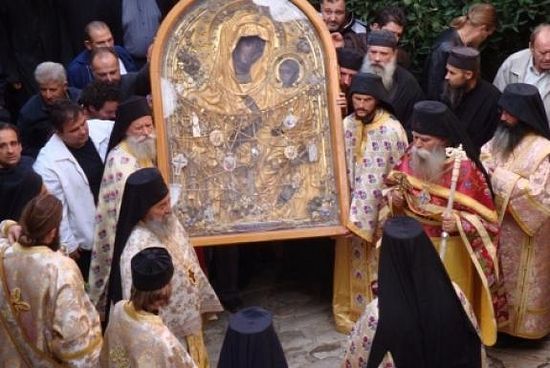 “In Her [the Virgin Mary’s] home, at Docheiariou Monastery on Holy Mount Athos, where the monastery abbot, the venerable elder Gregorios, together with the brethren daily sing psalms, celebrate supplicatory services, and pray for the health and repose of hundreds of people, one of our brothers in Christ prayed in the chapel and received abundant grace from the ‘Quick to Hear’ icon of the Mother of God, who quickly and willingly pours out Her mercy upon all who invoke Her with reverence and faith,” reports the Greek website Vimaorthodoxias.gr.

According to an eyewitness, an eighteen-year-old man from the town of Strumica, who suffered from a bad stutter, visited Docheiariou Monastery to venerate the miracle-working icon of the Mother of God “Quick to Hear.” When the young man, who had never spoken before and could only make unintelligible sounds, entered the monastery and stood next to the “Quick to Hear” wonderworking icon, he suddenly cried out in his native language: “Mother Mary, give me my health.”

All who were with him and knew the young man’s life were amazed. After the prayer, which a monk calmly continued to read, the young Macedonian addressed all present who had prayed and said: “Thank you everybody, now I feel very well.”

This is yet another example of the miraculous power of the All-Pure Virgin who through Her “Quick to Hear” icon pours out Her grace upon many believers every day in Greece and abroad. People pray and call upon her, exclaiming: “Rejoice thou who art quick to hear, fulfilling our petitions for our benefit!” 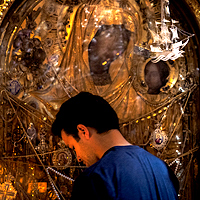 Dochiar. Honoring "Her Who is Quick to Hear"

Lisa 12/20/2019 9:47 am
Panayitsa mou, Please hear my prayers and heal me and my husband spiritually, physically and psychologically.Heal me from anxieties and heal our physical symptoms

Bay Tiong9/22/2019 11:52 pm
Amen. Please Mother of God give my sense of hearing - left ear and that my family with be closer to the Blessed Sacrament and practice the virtue of faith.

rnie Stathes3/3/2017 12:17 am
Oh Holy Mother I pray to you to intersead for my Granddaughter Dena , who has a serious heart condition and will require a second more serious surgery . I implore you throu your Son to heal her .A .

Thank you Mother of God for your love

I ask you to Heal me and all my children grandchildren and family.

I'm nothing compared to you Panagia.
×