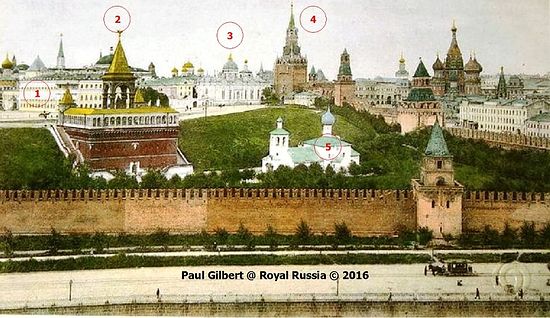 The early 20th century postcard (above) reflects some of the greatest architectural losses in the Moscow Kremlin during the late 1920s - please refer to the numbers and the accompanying images below for additional information about each respective monument . . 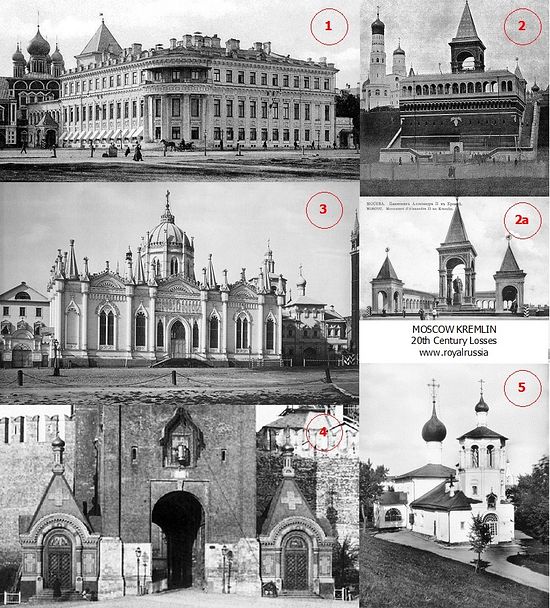 1 - The Maly Nikolayevsky Palace or Small Nicholas Palace was built in 1775. The palace was a favourite residence of Grand Duke Nicholas Pavlovich (future Emperor Nicholas I), and it was here that his son, the future Alexander II, was born on April 17, 1818. The palace later became a residence of Grand Duke Sergei Alexandrovich during his years as Governor of Moscow. The palace was badly damaged during the Bolshevik Revolution, it was destroyed by the Soviets in 1929.

2 - The monument to Emperor Alexander II was begun under his son Alexander III in 1893, and was completed five years later under his grandson Nicholas II in 1898.

2a - The memorial consisted of a life-size bronze sculpture of the "reformer tsar". The statue was demolished in the summer of 1918, while the columns and gallery stood until the end of the 1920s.

3 - The Voznesensky (Ascension) Convent was founded at the beginning of the 15th century near the Kremlin’s Spassky (Savior’s) Gate. It was destroyed in 1929.

4 - The two chapels at the Spassky Gates (facing Red Square) were built in the “Russian style” in 1866. Both belonged to St Basil's Cathedral. The left houses the sacred image of Our Lady of Smolensk as a reminder of the city’s return to the Russian lands in the 16th century. The right is renowned for its sacred image of Christ the Savior, an exact replica of the icon over Spassky Gates. They were both demolished in 1929.

The 16th-century icon was bricked over during the 1930s, and restored to its original in 2010.

5 - The Church of Konstantin and Elena in the lower section of the Kremlin Garden was built in 1692 by Tsarina Natalia Naryshkina, mother of Peter I. It was demolished in 1928. Now the site is home to government buildings and a helipad.

I have published numerous articles on the destruction and proposal to reconstruct the Chudov and Voznesensky monasteries on my Royal Russia News blog, click on the link below for more information and photos:

I am currently conducting research for an article on the lost architectural monuments of the Moscow Kremlin, scheduled for publication in the No. 12 Summer 2017 issue of Royal Russia. Restoration of the Kremlin monasteries to start after the decision of UNESCO
All the necessary documents related to the impending work have been submitted to UNESCO. Now all depends on the promptness of this organization’s decision-making.
Comments

Erica Schlather3/2/2017 7:45 am
Please see an historical painting of the Kremlin buildings you highlight in your article, long-ago demolished. On Ebay now: item number 192115375170
Listing name: Russia Holy Gate of Kremlin Spasskaya Tower Moat Ivan Sobelev Oil Canvas Moscow
Here you will be able to see the wonderful colors of the buildings in all their glory.
You may want to copy the photos for your research.