Meditating on the Significance of Christmas 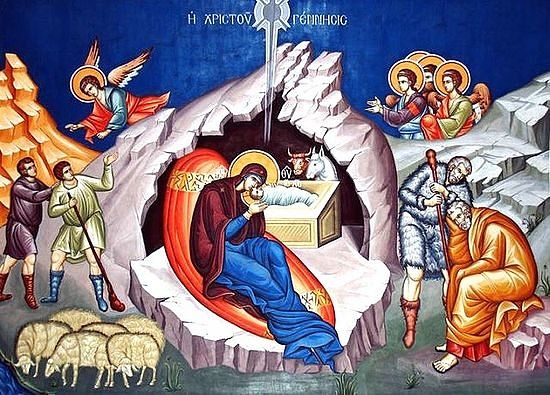 Today when many folk think about the Christmas story, they call to mind a manger, shepherds, a star, magi, a poor Virgin. These are sometimes thought of as the “historical” facts about Christ’s birth. These details are sentimentalized in Christmas cards and carols. The Evangelists who give us the Nativity narratives, Sts Matthew and Luke, probably didn’t see these details as being particularly “historical.” They used other elements in their narratives to show the historical nature of the birth of Jesus Christ.

St. Matthew in his Gospel gives the birth of Christ a “historical” context by setting the birth in the line of a genealogy from Abraham until Christ (Matthew 1) – thus establishing the birth as a genuine part of Jewish lineage and promise. He also establishes the historicity by mentioning the evil “Jewish” King Herod (Matthew 2) – thus giving us the “time” in which Christ’s birth occurred – an evil time for Jews in which their faith was being corrupted by Herod’s false religion and his grand Temple complex. St. Luke, on the other hand, uses the historical backdrop of the Roman Empire and Caesar Augustus to put the birth of Christ into world history (Luke 2). Also, an evil time for the Jews who were a conquered people, living in subjugation to a pagan world power. For both Evangelists, Christ is born into a threatening world, bringing God’s kingdom to worldly kings who would oppose it.

The two Evangelists, Matthew and Luke, write within the context of their time, and with their own understanding of what “historical” means. They weren’t historians in the modern sense of scholars searching ancient documents or doing archaeological studies to establish the facts. They accepted as true the oral or written traditions they received and were OK with some alterations in “historical facts” if it met the theological purpose of the narrative to convey a godly truth. Thus Luke and Matthew’s genealogies don’t perfectly match, but that is not their point, they are tracing lineages back to Abraham (so Matthew) and to Adam (so Luke) for theological reasons. Both attempt to place the Nativity narrative within the context of different Jewish prophecies which result in some factual discrepancies in their version of events. They weren’t however writing for each other, but rather were using the prophetic traditions known to them and important to them. The birth of the Messiah fit the prophecies which they knew, even if the two birth narratives can’t be perfectly reconciled. Modern folk equate fact and truth, but ancient believers saw truth as being eternal and divine, and the events of the world were the clothing which make truth visible to us. These ancients did not always equate the details (the clothing of events) with fact. The details simply made the truth knowable to us, and so details might be altered to make the truth more clear. In the current age, we generally don’t think like the ancients about these details. We need to remember that. [Probably the closest we moderns come to the ancient way is during election times when politicians change the details of events in their campaign speeches in order to fit the narrative they want to tell. “Truthiness” as Colbert called it. But remember this is still different than how the ancients understood events. Modern politicians still have our modern idea of facts, and alter them to fit their needs. Ancients saw the details of narratives as simply the clothes to make something visible. They weren’t cynically manipulating facts to create misinformation.]

In the Post-Apostolic and Patristic period, writers often had a similar sense of what is “historical” to the Evangelists and so could accept the Gospel accounts as “history”. But in the generations of Christians following the apostles, the truth of the Nativity narrative which was most essentially focused on was “who is Jesus Christ?” What was seen as the historical fact and of greatest importance is that Jesus is God incarnate. As Roman Catholic scholar Luigi Gambero writes:

“…We must recognize that the Church was less interested in the historical modalities of Christ’s birth than in the mystery of his Incarnation, which was one of the principal objectives of the apostolic kerygma [teaching, message] from the beginning. The ancient Christians held beyond a doubt both the divine origin of the person of Christ and his perfect humanity; but they likewise held that his actions would be incomprehensible if reduced to a scheme of purely human categories.” ( Mary and the Fathers of the Church, p 25) The Incarnation is the Fruit of God's Generosity
Fr. Georges Massouh

The Incarnation is the Fruit of God's Generosity
Fr. Georges Massouh
In the icon of the Nativity, we see a bull and a donkey surrounding the baby Jesus to warm Him. They symbolize the prophecy from the Old Testament, "The ox knows its owner and the donkey its master’s crib; but Israel does not know, My people do not consider” (Isaiah 3:1). Be generous, just as God is generous. That is the feast. The Goal of History is the Birth of the Christ
Fr. Ted Bobosh

The Goal of History is the Birth of the Christ
Fr. Ted Bobosh
“The entire month of December had taken on the character of a forefeast for Christmas. In this context, the theme of the original preparatory Sunday, the ‘Sunday of the Holy Fathers’ […], commemorating the ancestors of Christ ‘according to the flesh’ […], especially the patriarch Abraham, to whom the promise was first given (Gen. 12:3, 22:18), is fundamental to the whole period.