The Incarnation: To Allow Us to Know Happiness 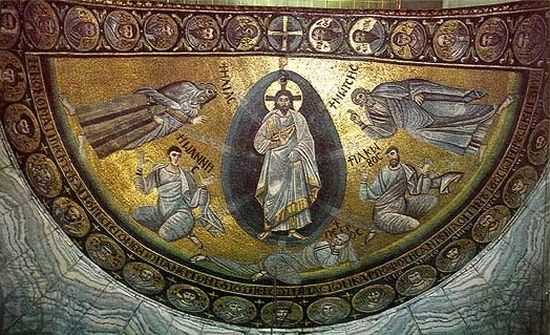 Apse mosaic of the Transfiguration from Saint Catherine's Monastery, Sinai

Christianity from its beginning proclaimed Jesus as the incarnate God. This claim seemed folly to many in the ancient world. For some asked incredulously, what would be the purpose of God becoming human? Or, (excuse the pun), why in the world would God, spiritual and eternal, lower Himself to becoming part of the material world. For many the purity of God protected Him from contact with the material world, let alone entering into it. What these critics couldn’t fathom is that in God creating the physical cosmos, God imbued the material creation with spiritual value. This is how and why God could so love the world as to give His Son to save the world(John 3:16). Historian Robert Louis Wilken tells us that Origen in the 3rd Century offered the following defense of the incarnation:

“In the first chapter of this book I quoted Origen’s response to Celsus’s taunt, ‘What is the purpose of God’s descent to human beings?’

Origen answered that God had entered our world in the person of Christ to ‘implant in us the happiness that comes … from knowing him. . . . For the knowledge that brings happiness is ours only in love. Unlike knowledge from a distance, for example, observing an object in the world, the knowledge of God, says Origen, is ‘fellowship with God through Christ.’ . . .

Jesus did not teach, ‘It is blessed to know something about God’; he said that blessedness ‘is possessing God within oneself,’ to be known by God, not only to know God. Happiness is found not in receiving something from God but in enjoying the presence of God, what the psalmists call the ‘face of God’. Love is the one human endowment that moves us to seek the face of God.” (The Spirit of Early Christian Thought, pp 292-293) An Uncomplicated Truth
Fr. Patrick Henry Reardon
And this is the reason the confession of Jesus never became, in the eyes of the Church, a challenge to biblical monotheism. In the Orthodox faith Jesus is divine because He pertains to—is included in—the identity of God. Gradually this truth became perfectly clear to a certain fishermen, an improbable tax collector, and some women of their company. Their conviction on the point was a big and difficult step, but it wasn’t complicated.

Christology: Being and Becoming
Fr. Patrick Henry Reardon
One way of defining “Christology” is simply, “talking about Christ.” In this elementary sense, of course, Christians have been “doing Christology” from the very beginning—from the very minute they were faced with the question, “What think ye of the Christ?”
Comments

Rdr Andreas Moran12/25/2016 4:47 pm
The beginning of the last paragraph of this piece reminds me what my late spiritual father, Bishop Irenaeos, said: 'Don't just be interested in Orthodoxy - be Orthodox!'
×