When we did the Vespers of Christmas on Friday evening (December 23), the very first hymn from the “Lord I call upon You…” verses really caught my ear as it seemed to capture so many of the theological lessons of the Feast of the Nativity. 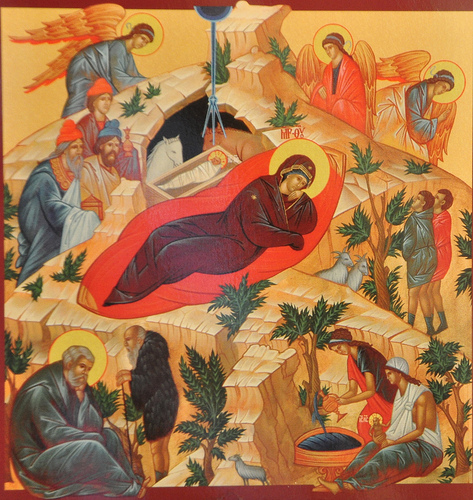 Come, let us greatly rejoice in the Lord,
as we sing of this present mystery:
the wall that divided God from man has been destroyed;

[In Ephesians 2:13-16, St. Paul refers to the “dividing wall”: “Therefore remember that at one time you Gentiles in the flesh, called the uncircumcision by what is called the circumcision, which is made in the flesh by hands— remember that you were at that time separated from Christ, alienated from the commonwealth of Israel, and strangers to the covenants of promise, having no hope and without God in the world. But now in Christ Jesus you who once were far off have been brought near in the blood of Christ. For he is our peace, who has made us both one, and has broken down the dividing wall of hostility, by abolishing in his flesh the law of commandments and ordinances, that he might create in himself one new man in place of the two, so making peace, and might reconcile us both to God in one body through the cross, thereby bringing the hostility to an end.” (Emphasis is mine and not in the text) 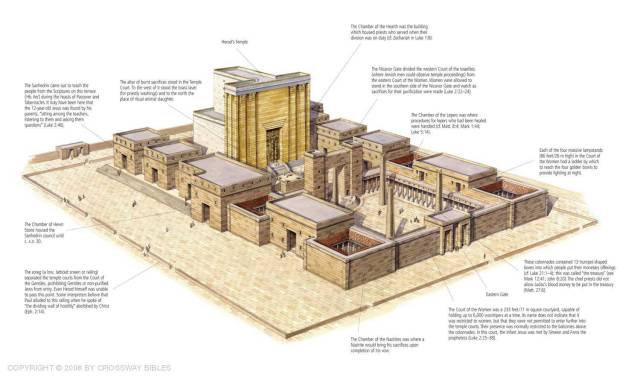 For St. Paul, we Gentiles especially were separated from God – we did not have the Law and we fell under the power the demons whom we spiritually served. But Jesus Christ ended that separation and we in Christ have been made part of God’s people. Certainly if one studies the layout of Herod’s Jerusalem temple, we get the visible, physical sense that there was a wall (several!) separating the Gentiles from God. St. Paul says, and the hymn certainly picks up this theme, that any “wall” which had separated us from God is abolished. Whatever wall had been built to divide Gentiles from Jews or humanity from God is destroyed by Jesus Christ. In its place, we have been built into a living temple. So new construction took place – the dividing wall was demolished and now we are built as the walls of the temple – nothing separates us from God for God abides in us His temple. In St. Paul’s day, he would have known of the destruction of the temple in Jerusalem. Christ Himself replaces that demolished temple. Christmas celebrates the removal of all walls and divisions between God and humanity! We have access to God, to God’s Kingdom, to heaven where God abides. (Sadly, at times in Orthodox thinking the “dividing wall” gets rebuilt and seems to be preferred – iconostases and doors and curtains are built some say to make us feel our exile from God. Laity are separated from clergy by such walls. We recreate walls separating Orthodox from Jews and non-Orthodox Christians. Men and women are separated, as are monks from the rest of the laity. We would do well to consider what our Nativity hymns tell us about the complete elimination of such walls.) Almost all of our Feasts of Christ and the Theotokos have in one form or another a theme of the dividing wall being torn down – heaven is opened to us, the Holy of Holies is opened to us, Paradise is opened to us. God is united to humanity, heaven and earth are joined together. If theosis is true, there are no walls separating us from God, nor would any baptized Christian be separated from any other.]

the flaming sword withdraws from Eden’s gate;
the Cherubim withdraw from the Tree of Life;

[In Genesis 3:24, as a result of the sinful disobedience of Adam and Eve, God expels them from Paradise and creates the dividing which prevents our immediate return to Paradise. “God drove out the man; and at the east of the garden of Eden he placed the cherubim, and a flaming sword which turned every way, to guard the way to the tree of life.” According to our theology, in Christ the gate to Eden is opened to us again – the Cherubim no longer prevent us from accessing the Tree of Life. Christ’s cross is the Tree of Life and all baptized believers have complete access to Paradise and eternal life. No walls of any kind separate us from God, the Holy of Holies , Paradise or Heaven. Neither should we rebuild what God destroyed!]

and I, who had been cast out through my disobedience,
now feast on the delights of Paradise:
for today the Father’s perfect Image,
marked with the stamp of His eternity,
has taken the form of a servant.

[Christmas is the “today” on which “I” and every “Adam” and every Christian experiences the Paradise which had been denied us because of sin. The Law just ended up building a bigger wall between humanity and God, since humans proved incapable of keeping the Law. It is the Word of God becoming incarnate, taking on human flesh, in Jesus Christ which unites us to Heaven. It is not our doing – we can’t attain Heaven by perfectly keeping Torah or Tradition. It is not a matter of our trying harder – pray more, fast stricter, repent more deeply, attend more and longer services. It is Christ in His person who heals and saves us. We are gifted with salvation – we put on Christ in baptism and thus receive union with God. We continue to experience that salvation in and through the sacramental and liturgical life which inspires us to the moral life. Nothing separates us from God, there is no more exile.]

Without undergoing change He is born from an unwedded mother;
He was true God, and He remains the same,
but through His love for mankind,
He has become what He never was: true man.
Come, O faithful, let us cry to Him:
“O God, born of the Virgin, have mercy on us!”

[As the early Christians said it, “God became human so that humans might become God.” The first part of this is the Nativity of Christ! The incarnation makes theosis possible. The Theotokos is the true sign of this salvation. God became that which is “not God” – God became human to lift humanity up to union with divinity. This is what God has wished and worked for throughout history since the time of the sin of Eve and Adam.] In the name of the Father, the Son, and the Holy Spirit
Fr. John Whiteford

Christ and History
From a series of sermons by Fr. John Whiteford, the rector of St. Jonah Orthodox Church, Spring, Texas
Fr. John Whiteford
If you read the Book of Genesis especially, you find this phrase repeated whenever is introduced a new figure, or basically a new chapter in the history of God’s people. Looking like Christmas
Fr. Stephen Freeman
One of the most striking features of the Gospels is the frequent response of the Disciples after the resurrection of Christ: doubt.