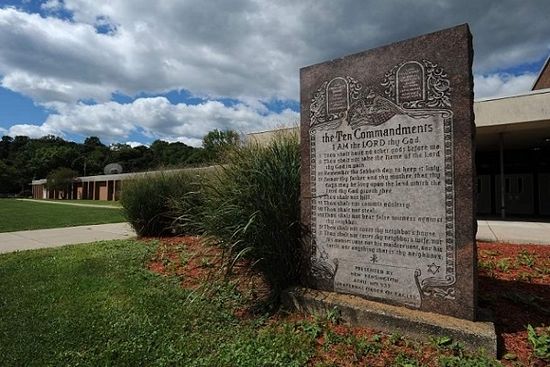 In 2012, a group of atheists sued the New Kensington-Arnold School District to remove a Ten Commandments monument standing in front of Valley High School, thinking that by it the school district was forcing Christianity upon its students.

Now, after several years of legal battling, an agreement has been announced between the Pittsburgh area school district and Wisconsin’s Freedom From Religion Foundation in which the district will remove the monument within thirty days after February 15, reports Trib Live. Moreover, the hurt feelings of Marie Schaub, the atheist who filed the case in 2012, have led to the school district’s insurance company having to pay $163,500 in legal fees, including $40,000 to the anti-religion foundation.

Schaub argued that the monument is strictly religious and thus offensive to her and her daughter. She even withdrew her daughter from the school to shield her eyes from the harmful sight of the stone in the school’s yard. Her cause was thrown out in July 2015 as her daughter was no longer a student at the school, but was reinstated a month later when a court determined the need to withdraw her daughter constituted an “injury” from the monument.

Interestingly, several private vendors are now vying to buy the monument, which will likely give it even more exposure. According to school district superintendent John Pallone, the monument was not prominently placed at the school and many never even realized it was there or realized what was on it.

Pallone said the district believed it had an ultimately winnable case, but decided to settle rather than drag the battle on any longer, using up more of the district’s resources. Soon atheists of Valley High School will no longer have to worry about the harmful attacks of the stationary rock and encountering other worldviews and ideas at their place of education. Atheists Threaten to Sue Calif. City for Holding Prayer After Shooting of 6-Y-O Girl
An atheist group is threatening to sue a California town for hosting a 12-hour prayer rally on the steps of city hall the day after a 6-year-old girl was shot last week and for planning to host a town hall meeting at a church facility. Christian Outraged as Decades Old Jesus Portrait Is Forcefully Removed From Kansas School by Atheists
Kansas residents are outraged after an atheist group forced a local middle school to remove a portrait of Jesus Christ that had been displayed in the school since the 1950s.
Comments

Foma Dobrov3/7/2017 8:50 am
This Hate and Intolerance is sold as "Progress" to Liberals in America. Hate as Progress.
This is Bolshevik Marxism all over again.
66 million Christians killed by Marxist in Russia.
They destroyed Germany twice,Poland Eastern Europe and now turning America into a 1920's Berlin.
Degeneracy as Progress.
This is the Devil.
We can only pray.

T.D.3/6/2017 7:11 pm
America's fall is irreparable. Trust me, I'm an American. It makes me sick to think that the strength of my nation goes to support the Zionist occupiers, the monsters in Ankara, and the traitorous junta in Kiev. Please pray that America would come to its senses.
×