Large-scale mosaics from Russia arrive at St. Sava’s in Belgrade 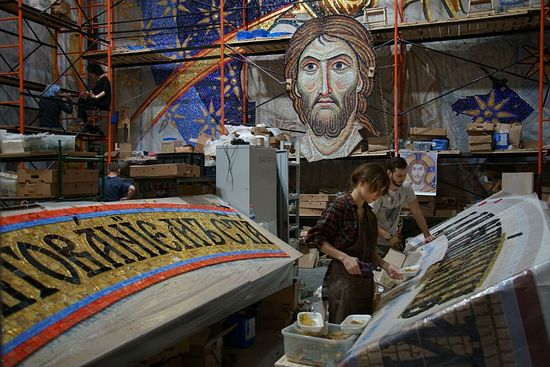 
Mosaic panels for the adornment of the Church of St. Sava in Belgrade were delivered on Wednesday from Russia, reports RIA-Novosti.

The large-scale mosaic icons, prepared by Russian master craftsmen for one of the largest Orthodox Churches in the world, arrived during the day on a special delivery truck from Moscow. The First Deputy Prime Minister and the head of the Serbian Ministry of Foreign Affairs Ivica Dacic noted at the ceremony of meeting the mosaics that the realization of the project for adorning the church is now in its middle stage, and expressed their great gratitude to the Russian Federation “on behalf of the Serbian government and on behalf of the state of Serbia.”

This cooperation is not just a sign that the church will be a place of unity and community, Dacic stated, but moreover, that Serbia will forever uphold its brotherhood with Russia, more necessary now than ever in these uncertain times.

The icon of the Ascension, with an area of 13,000 sq. ft., and a weight of 11 tons, was created in the studio of the People’s Artist of Russia of the Russian Academy of Arts Nikolai Mukhin. Work on installing the mosaic in the dome is to begin with a month, and will be accomplished by a team of Russian and Serbian specialists.

Met. Amfilohije led the Serbian Orthodox delegation meeting the icon, and thanked the Russian leaders and His Holiness Patriarch Kirill who helped make the creation and delivery of the new icon possible. A celebratory moleben was served upon meeting the icon.

The preparation of the dome

In late August 2016, representatives of Russia and Serbia signed an agreement on the donation of nearly $4,400,000 for the adornment of the St. Sava’s Church. Russian, Belarusian, and Serbian artists are working together to create the mosaics and other architectural elements for the church.

The first and second phases of the creation of the mosaics is to be completed by 2019, when the 800th anniversary of the Serbian Orthodox Church’s autocephaly will be celebrated. The cathedral is dedicated to the founder of the Serbian Church St. Sava, the Archbishop of Serbia. Construction began in 1894, on the site of the 1594 Turkish burning of St. Sava’s relics. Work continued throughout the twentieth century, although with the significant interruptions of World War II and the Yugoslav Communist period.

Work resumed in 1985, and all external work was completed in 2004. Now the focus is on the internal adornment of the church. St. Sava’s is one of the largest Orthodox churches in the world, with a floor area of 39,000 sq. ft., and a height of 260 feet including the cross atop the dome. The church is designed to hold 10,000 people. Life of Our Holy Father Sava I
Enlightener and First Archbishop of the Serbs (+1235)
This young child, Rastko, whose monastic name later was Sava, became and still remains the most beloved of all Serbian Orthodox saints, considered by all Serbs everywhere and at all times as the ultimate expression and example of what it means to be fully human, that is, what it means to be a devout and committed follower of Jesus Christ.