The head of the Russian Imperial House H.I.H. the Grand Duchess Maria of Russia recently released a statement on the 100th anniversary of the 1917 Russian Revolution, calling for an evaluation of the bloody events based on the “system of spiritual and moral values that took shape during the long course of Russian history” and stating that the main cause of the revolution was a “profound spiritual crisis.”

Her Imperial Highness’ message, released on November 4, the Day of National Unity, opens with the sad note that, while many are attempting to provide a fair assessment of Russia’s 20th century, “there were also attempts to open old wounds and to sow again the seeds of dissension among our people.” As opposed to such divisive tactics, the Imperial House head calls for an historical understanding based on party ideology, but on Russia’s deeply-entrenched spiritual and moral values. 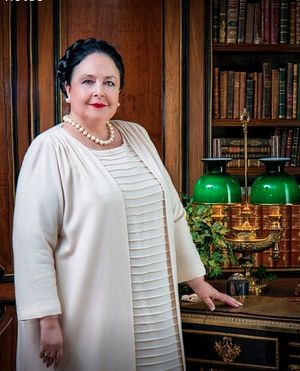 Screenshot from russianlegitimist.org
In this vein, Grand Duchess Maria goes on to write of the Royal House’s own guilt in the fact that the country underwent such a revolution, noting that it therefore suffered along with its countrymen. “For the Holy Royal Passion-Bearer Emperor Nicholas II, his family, and other members of the dynasty who remained in Russia, this meant martyrdom,” while for those who moved abroad, it meant the grief of lost loved ones and separation from their beloved homeland.

“So, indeed, our dynasty has much for which it must repent, and, at the same time, one can also see the injustice and cruelty that were delivered to it and to it supporters and friends,” she writes.

Calling upon all to learn the necessary lessons from the past, the grand duchess states that, whatever the losses or benefits of the revolution may be, “one can never see it as a good thing when children kill their parents, and when parents kill their children, and when brother and sister exterminate each other.” However, as she continues, Russia was undergoing a deep spiritual crisis, with a loss of faith in traditional values, religion, monarchy, and the family.

“The historical state structure of Russia was destroyed not because it had powerful opponents (though these opponents did play a role in events), but largely because its defenders were too indifferent and divided,” she laments. Had the nation been united and strong, no such revolution would have been able to shake the foundation of the government. However, the elite in the empire were unable to satisfactorily answer the people’s calls for reform.

Though the revolution was founded on dreams of an earthly paradise, “no matter how outwardly beautiful and appealing such ideas are, they are utterly unattainable, and attempts to realize them in practice always turn to disappointment and disaster.”

In Her Royal Highness’ estimation, the dialectical relationship of a totalitarian, materialistic ideology, and the attempt to solve real, everyday problems, more than anything else determined Russia’s course over the ensuing seven decades.

It would be incorrect to simply erase the Soviet era from Russia’s history, with the good and the bad, or to picture it as an entirely dark period—such revision and retaliation, she writes, leads inevitably to a “pendulum effect” backlash: “If, in our struggle with one extreme we take the side of the other, we have not made things any better in the end, but have only exacerbated the situation.” What is needed is a “spirit of mutual forgiveness, patience, and respect.”

Showing a depth of spiritual understanding, the grand duchess goes on to write of repentance, which “is not a humiliating or demeaning thing, but something that lifts us up and cleanses. But it is unreasonable and sinful to demand repentance from others, proudly seeing ourselves as sinless judges. Only by giving an example ourselves by our own repentance can we show those around us the salvific meaning of true repentance.”

Read the full statement at The Russian Legitimst. Our country paid for the revolution with millions of lives—Met. Hilarion
The chairman of the Moscow Patriarchate’s Department for External Church Relations Metropolitan Hilarion (Alfeyev) of Volokolamsk expressed his conviction that Russia would have achieved much greater success if it had developed not along a revolutionary, but an evolutionary path. The October Revolution: Prophecies on Russia’s Destiny
Why is this subject so important to us (and we must understand that it is of very serious importance to us) who may have nothing to do with Russians or Russia? Those who have ears to hear, let them hear; and those who have eyes to see, let them see. Atone for sins of revolution by building kind and just society—Patriarch Kirill
Patriarch Kirill of Moscow and All Russia has called upon all Russians to build a good and just society as a means of repenting of the sins of the past. He broached the topic in connection with the centenary of the February Revolution after the Sunday Liturgy in Moscow’s Christ the Savior Cathedral.
Comments

Joseph11/9/2017 11:46 am
F:Russia as an empire under previous tsars was very strong and won many wars. That's not the point. The point is that the nation lost its strength by losing (at least among the elite) the strength and purity of its Orthodox faith, and thus God's grace was withdrawn from it for a time. "Evil will not defeat Evil. Only Love will defeat Evil."

F.11/9/2017 4:12 am
All the same, don't the Russian nationalists realize that the Czarist policies of backward feudalism and little freedom destroyed technological progress and made Russia weak and unable to stand up to the West (Crimean war and WW1) and Imperial Japan (1905)? Only Putin can now stand up against the western colonial hegemony. Only a merit based system, of which Putin was a product of, can succeed. Birth-rule, with no accountability or filtering of low-intelligence, will lead to corruption and incompetence.
×