On the Holy Martyrs

A Homily for the Commemoration of St. Catherine 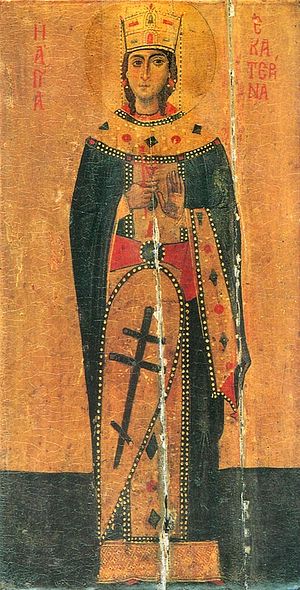 When in the first centuries of Christianity the Church experienced a heavy period of persecution, it was adorned with an innumerable host—thousands, and more than thousands—of holy martyrs.

Nowhere near all the martyrs’ names have been preserved; nowhere near all of their podvigs have left memories; but several records of these podvigs were then undertaken, and in these records were the names of those who suffered, and their sufferings for Christ the Savior are described. These list are called martyrologies, from the Greek word “martyros”—“witness.” The martyrs were given this name in antiquity. Why were they called this? Because by their courage, their faithfulness to Christ, and readiness to go not only to bloody torment, but even to death, they witnessed to the strength of their faith, and of the truth of Christianity.

The Church glorifies the holy Great Martyr Catherine today. A young girl, of a rich and noble family, an unusual beauty, she had, it seems, every opportunity to rely on so-called “success in life.” There were many contenders for her hand—they were drawn by her nobility, and wealth, and her amazing beauty, but they all received her refusal. From her life we know that the Lord Himself called her to Himself in a miraculous manner, in numerous visions. And when He placed a ring upon her maiden hand and said, “Know not an earthly bridegroom,” then she wholly made haste to the Heavenly Bridegroom and was prepared to endure any suffering and even death for Him. Terrible agonies, which present themselves as fearful to man, are described in her life, but the young maiden endured them not only uncomplainingly, but rejoicing that she could prove her love to her beloved Bridegroom and her faithfulness to Him. What a touching example! Nobility, wealth, youth, and beauty—all sacrificed for the sake of the Lord our Savior…

Soon will be the memory of the Great Martyr Barbara who is similar to her. She was also a noble, also rich, also a girl of astounding beauty, and even younger than St. Catherine—quite young, a young teenager, she went to her suffering, also like Catherine, rejoicing that she could show and prove and bear witnesses to her faith, fidelity, and love for Christ. This is why the holy martyrs are known precisely as witnesses. Their testimony of faith and of the truth of Christianity is preserved by the Church, not falling silent. Their examples have inspired a host of New Martyrs in our homeland, who glorified God by their faith, patience, and martyric deaths, when they, like the ancient martyrs were oppressed and persecuted, and were prepared for everything.

The ancient martyrs testified to the later New Martyrs about that Truth for which they suffered and died. Their example inspired our New Martyrs. The Church offers their example to our attention, that we, inspired by their resolve, would be faithful to our Savior to the end, and that that to which the Lord so loftily calls us in the Apocalypse would be fulfilled in our lives: Be thou faithful unto death, and I will give thee a crown of life (Rev. 2:10). Unto death, and an arduous death were all the holy martyrs faithful—for which they received that crown of life which the Lord has prepared for those who love Him. May the Lord help us to follow their high and holy example. Amen. Bride of Christ, St. Catherine of Alexandria
Pilgrms approach one by one to kiss the Saint’s precious relics, each with the secret prayer closest to his heart, and then bow to receive the ring blessed by her grace, to be worn forever in mystical union with the Heavenly Bridegroom – and all those illumined by the Holy Light of Sinai to exchange the worship of this world’s false gods for union with the Most High – inspired by the radiant example of our Princess among the Saints, the Holy Great-Martyr and All-Wise Bride of Christ, Catherine of Alexandria. Great-Martyr Katherine
Lives of Saints for Young People
After praying fervently that night, St. Katherine fell asleep and dreamt that she was standing before the Virgin and Child. The Child’s face was turned away from her. When His mother asked Him to look at the beautiful girl, He said He wouldn’t until she changed her pagan ways and returned to the holy monk for guidance. Eagerly St. Katherine did so. The monk taught her about the One True God, the Creator of Heaven and Earth, and the Saviour of Mankind. St. Katherine soon believed in Jesus Christ with all her heart and was baptized.
Comments
×