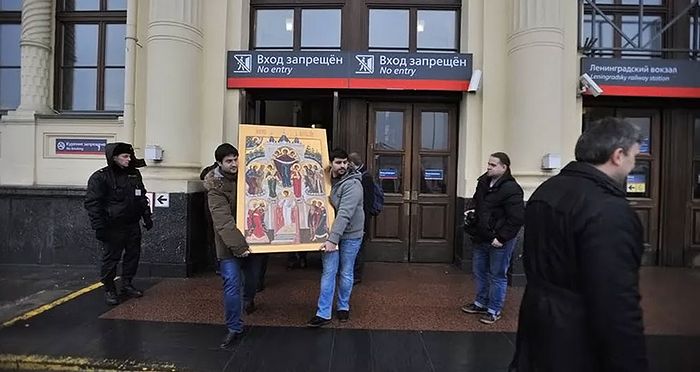 An icon of the Holy Protection of the Mother of God being carried out of a train station after a previous year's moleben. Photo: Foma.ru

Annual prayers for peace and the safety of travelers will be held at Moscow train stations next Monday before the wonderworking Softener of Evil Hearts Icon of the Mother of God, reports the journal Foma.

The prayer process will begin with a moleben in the Kazan Icon of the Mother of God Chapel at Moscow’s Kazansky Train Station on Monday morning, the press service of the Synodal Department for Church Relations with Society and the Media reported today.

The wonderworking Softener of Evil Hearts Icon is renowned for many miracles and healings and has visited cities throughout Russia and in other countries and continents.

Prayers for peace and for those traveling will be offered up during the service at each of the stations. After the Kazansky Station, the miraculous icon will also be taken to the Yaroslavlsky, Leningradsky, Rizhsky, Savelovsky, Belarusky, Kievsky, Paveletsky, and Kursky stations as well.

A short service will be celebrated at each station, after which all those wishing to will be able to venerate the beloved icon.

The molebens are being organized by the Orthodox public movement “Christian Good Deeds,” and will be held with the cooperation of the Publishing House of the Moscow Patriarchate, the Directorate of Train Stations, the International Association of Veterans of the Alpha Anti-Terror Unit, the professional union “Stuntmen of Russia,” and the charitable foundation “Defender of Happiness.” The Icon of the Mother of God “Assuage My Sorrows:” The Story of its Appearance and Miracles
Ekaterina Lavrova

The Icon of the Mother of God “Assuage My Sorrows:” The Story of its Appearance and Miracles
Ekaterina Lavrova
In Moscow, in the Church of St. Nicholas in Kuznetskaya Sloboda, there is a wonderworking icon, “Assuage My Sorrows,” which heals from infirmities! 30,000 Muscovites venerated "Tenderness" icon
Every year on the Saturday of the Akathist of the Mother of God the icon is brought to the Theophany Cathedral in Moscow for two days.

She Who Gusheth Forth Myrrh, Who Healeth Hearts
A Conversation with Sergei Fomin, keeper of the Icon of the Theotokos, ”The Softening of Evil Hearts”
Tatiana Veselkina
This icon is the contemporary work of Sofrino craftsmen. It is an ordinary lithograph. It had been in the apartment of Muscovite Margarita Vorobyova, where it began to gush myrrh. This happened in 1998, after it had been placed on the relics of the blessed Matrona of Moscow, during her glorification on the 2nd of May. After some time, the icon was miraculously transformed, and now many who have seen it cannot tell that it is a lithograph and not an icon painted long ago.
Comments
×