The Icon of the Mother of God “Assuage My Sorrows:” The Story of its Appearance and Miracles

In Moscow, in the Church of St. Nicholas in Kuznetskaya Sloboda, there is a wonderworking icon, “Assuage My Sorrows,” which heals from infirmities!

How did the “Assuage My Sorrows” Icon appear? 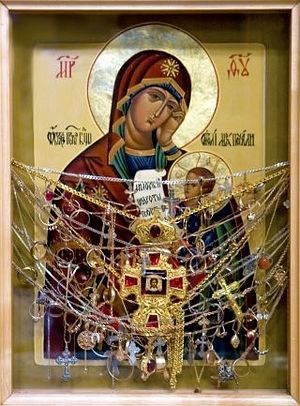 The “Assuage My Sorrows” Icon
The woman had it all: A position in society, noble family roots, wealth, well-being—only one thing she lacked: health. What doctor didn’t come to see her? What funds did her family not spend to alleviate her suffering? Nothing helped; she was completely debilitated, losing strength and losing hope. She lived far from Moscow, and her earthly days were numbered. Suddenly, losing consciousness, she heard a voice, quiet, but very insistent:

“Tell them to take you to Moscow—there, in the Zamoskovreche region is a church, and in it is the icon “Assuage My Sorrows.”

They took the ill woman to the capital. There, in Zamoskvoreche, in the Church of St. Nicholas in Kunzetskaya Sloboda, among the old icons piled up in the bell tower, unused, they found the very “Assuage My Sorrows.”

And—a miracle occurred. The woman’s hand, not raised for many years due to her weakness, rose for the first time to make the Sign of the Cross. Then the sick woman stood up on her feet, and without any assistance, walked herself out of the church.

This was at the end of the seventeenth century, and even the exact date of the occurrence is preserved in the chronicles—January 25 [February 7]. However, the woman’s name has not been preserved, unfortunately.

I love to go the Church or St. Nicholas in Kuznetskaya Sloboda on Thursdays when they pray an akathist to the wonderworking icon. On one of these Thursdays I met Antonina Vsevolodovna Krupenkova, a retiree, a Muscovite, who, like many of us, came to the church with a serious illness.

“I had such attacks, I would scream at the top of my lungs. I had kidney stones; doctors had already prescribed surgery. One day, I accompanied my nephew to the Paveletsky train station—they have a dacha along that route. I accompanied him, then decided to walk to the Novokuznetskaya metro station; it was a really nice day.1 My legs themselves led me to the church. It was Thursday and they were reading the akathist. I stood off to the side and wept. I was very afraid of the coming operation. A woman nearby whispered, ‘Don’t cry, but pray.’ But how to pray? I began, ‘Mother of God, deliver me from this operation, I won’t make it through, I’m old…’”

The tears were flowing… I wept, went home, and I felt a little better. Then I noticed that I didn’t have any pulling pain in my lower abdomen. I went to “Assuage My Sorrows” again. I asked for some oil from the lampada before the icon and started adding a drop of it to my food.

I went for my referral for an operation. The doctor did a examination and looked at me with amazement: “I don’t understand something here—I don’t see any stones.” 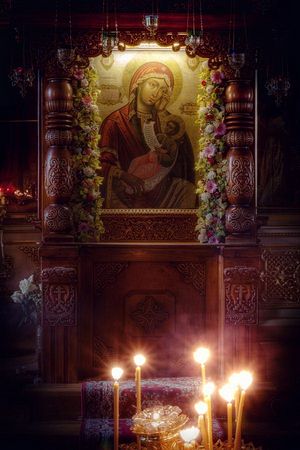 Photo: http://nikvkuz.ru
I began to weep again: “Doctor, the Mother of God healed me.”

I started to advise him: “If you get sick, doctor, go to the Church of St. Nicholas in Kuznetskaya Sloboda.”

He got angry. “I don’t believe in any icons,” he said. He was wringing the empty paper in his hands. He was supposed to write a referral for an operation, but I had no kidney stones…

Let it be unto you according to your faith.

We believe Antonina Krupenkova. We also believe Lyudmila Anatolievna Sirotkina from Khimki, in the Moscow Province. I told her about the situation with Antonina. She had the same story—kidney stones. She quickly got ready and went to the icon. She asked for oil from the lampada and began to gradually add it to her food. Before she had attacks every week, but now three months have passed without pain.

Besides adding the oil to her food, she also read the akathist to the “Assuage My Sorrows” Icon of the Mother of God at home every day, and, when it worked out she would go to the akathist at church.

Indeed, the miraculous “Assuage My Sorrows” Icon helps us in our infirmities and misfortunes. She assuages our many sorrows, although she looks at us from her icon with constant sorrow. The “Assuage My Sorrows” Icon is greatly venerated in Russia, and not just in the Church of St. Nicholas in Kuznetskaya Sloboda, but many other churches also have this icon. They have it at the Holy Trinity-St. Sergius Lavra in the Church of St. Sergius with the trapeza.

One time I was standing near the icon during a service and heard a young girl ask her grandmother, “Why is auntie2 holding her head? Does her head hurt?”

“You can’t talk that way. She’s not an auntie, but the Most Holy Theotokos.”

And I thought, truly our patroness’s head hurts for our sins and our unrepentant hearts. And, sending relief to us in our infirmities, the Mother of God calls us to unlock our hearts for faith and pure prayer. Perhaps this is healing from all kinds of sicknesses and sorrowful lamentations?

The icon depicts the Mother of God holding the Christ Child in her right hand, her left hand pressed to her cheek. The Christ Child is holding out before Himself an unrolled scroll with the words, “Execute true judgment and show mercy and compassion to all.”

1 This is a distance of a little more than a mile.—Trans.

2 It is common in Russia for children to refer to older women as “aunt” (“тетя”).—Trans.