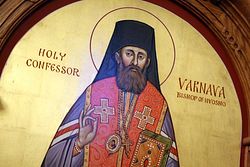 St. Varnava Nastic was a Serbian Orthodox bishop who was born in Gary, and later canonized as a saint. His likeness is depicted on a wall of St Sava Serbian Orthodox Church in Merrillville, where he will be honored Thursday.
From his childhood in Gary to his death in Yugoslavia, St. Varnava always protected his faith and was dedicated to a Christian life.

St. Varnava is the first American-born Serbian to be proclaimed an Orthodox saint, said the Rev. Thomas Kazich, who also is a Gary native.

St. Sava Serbian Orthodox Church will honor St. Varnava during a service at 6 p.m. Thursday at the church, 9191 Mississippi St., Merrillville. Kazich, with the Serbian Diocese of North America, and the Rev. Marko Matic, a priest at St. Sava, will be involved in the service.

"Not that many people know we have a saint in our neighborhood," Matic said.

Varnava was born in Gary in 1914 and lived at a home near 12th Avenue and Madison Street, Kazich said.

Varnava, whose secular name was Vojislav Nastic, was the first person baptized at St. Sava when it was located in Gary.

"He grew up in a very spiritual family," Matic said.

He also served as an alter boy at the church.

"He was at the services every Sunday," Kazich said.

Varnava went to Froebel Elementary School while he and his family lived in Gary for about nine years. They moved Yugoslavia in 1923, Kazich said.

When he finished the equivalent of high school, Varnava's father took him to see Bishop Nicholai Velimirovich to receive the bishop's blessing to study theology.

"As (Varnava) wrote, 'Theology is the science of sciences,' " Kazich said.

The bishop gave him his blessing, and he started his studies.

Kazich said Varnava's family was influential in his upbringing in the church. He said everyone in the church has a spiritual guide, and "his spiritual father was his own father."

Varnava was ordained a priest in the early 1940s, and the Serbian Church elected him to become a bishop in 1947, Kazich said.

Varnava began to preach against the Communist way of life after becoming a bishop, and Yugoslavia's Communist government arrested him on treason charges.

During his trial, Varnava wasn't allowed to deliver a final defense plea because "it was feared that he would expose and reveal the government's criminal, terroristic and tyrannical policies," according to a report written by Kazich.

In 1948, Varnava was sentenced to 11 years at one of the worst prisons at the time in Yugoslavia, Kazich said.

Varnava survived the crash, but his legs were broken.

"And he suffered from that for the rest of his life," Kazich said.

Due to health problems, Varnava was released from prison in 1951, but he always was under guard by the Communist government until he died in 1964.

Kazich said Varnava died under suspicious circumstances, and many believe he was poisoned. He said an autopsy couldn't be conducted at the time.

Kazich said Varnava's family knew he didn't have a history of illness. He also wrote letters to them about his good health prior to his death.

No matter the circumstances, Varnava always remained "a follower of Christ," Matic said.

"He became one of the strongest protectors of his faith," he said.

Matic said Varnava remains an inspiration to many at the church.

St. Varnava was canonized about five years ago.

Kazich said canonization in the Orthodox Church differs from the process used in the Catholic Church.

The process "begins locally, at the grass-roots level, perhaps where the holy person was born, lived and worked," Kazich said.

"The love and veneration of the faithful spread to other areas," he said. "The hierarchy of the local church then undertake to examine all records left by the person and if this proves satisfactory, then the last part of the act is performed and canonization is announced and a service of glorification takes place." On the Feast of the Ascension: A Sermon by Our Righteous Father Sebastian Dabovich San Francisco, 1899
St. Sebastian Dabovich
The "two men in white apparel," who immediately after the ascension of the Lord appeared to the Apostles and asked them why they stood gazing up into heaven, were without doubt themselves inhabitants of heaven; therefore it is not to be supposed that this was displeasing to them, or that they desired to direct the gaze of those men of Galilee elsewhere. No. They desired only to put an end to the inert amazement of the Apostles when saying: Why stand ye gazing up into heaven?
×