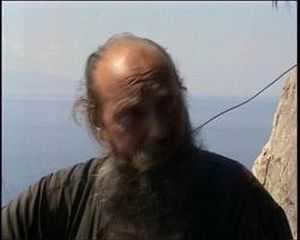 One of the “Terrifying” Karoulia hermitage caves on Holy Mount Athos is the site where the Serbian Monk named Seraphim lives in summer. Winter is very severe here, and so during the cold season he moves from the small, narrow cave, where there is barely enough space for one person, into a wooden hut outside.

Four boards and a mat—this is all he needs for rest and sleep.

Karoulia has caves with cells hung on precipitous rocks in the southernmost part of the Athos peninsula, not far from Katounakia skete. Distant caves that can be reached only by means of chains attached to the rocks, are called Inner, or “Terrifying” Caves.

The future Monk Seraphim formerly studied at the university, the Department of Economics, and then worked as a journalist in Serbian television media. In the world he left a 16-year-old daughter, reports Afonskaya Tribuna news portal.

“My faith had nothing to do with my work as a journalist—these are two opposite worlds, different values and convictions,” Brother Seraphim relates. “Here I am praying for my daughter and wife, since I have never really left them. I am with them in my mind. It is just that one fine day I simply became inflamed with love for our triune Godhead. And this is for the good of all of us”. 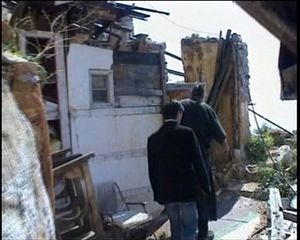 He lives in one of the remotest and wildest places of Karoulia, but nevertheless he says: “I am not alone here, many friends are with me.” When asked who these friends are, the monk answered: “Thousands of angels, and you can behold them only when you are laboring for the good of your soul, but not for the good of your flesh. The body needs very little of all the good things that the Lord abundantly sends us.”

“Once it happened that I had absolutely nothing to eat, and then a true miracle occurred. I saw an eagle flying very fast towards me. I got frightened and thought to myself: now it will seize me and carry away, goodness knows where. But, as it was approaching, I saw that it was holding something in its beak. It was a fresh fish… That was my supper on that day,” Monk Seraphim joyfully said in conclusion. The World or the Monastery?
Olga Rozhneva

The World or the Monastery?
Olga Rozhneva
St. Anthony of Optina replied to a question about the choice of the monastic life, that one can be saved both in a monastery and in the world. And he reminded us that the enemy may give zeal for virtues that are beyond our strength, while, on the other hand, he may instill neglect and carelessness towards deeds that are within our power.